Immigrant workers and their families demand reform from Democrats 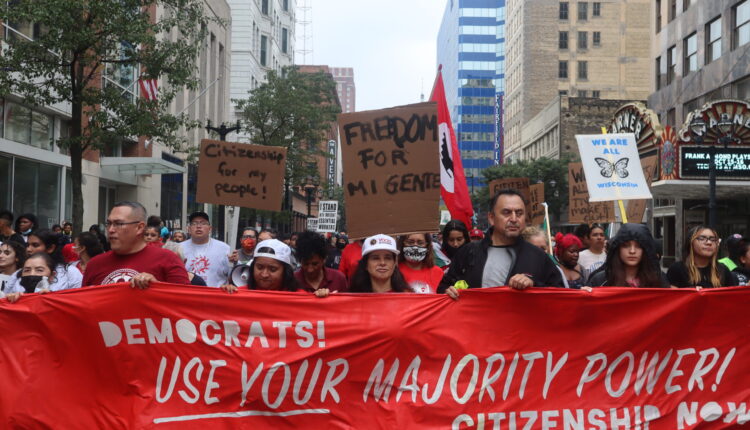 In honor of Indiginous People’s Day, hundreds participated in a march on Milwaukee’s Federal Building to demand that Democrats deliver on promises made to undocumented workers and their families. The march, led by Voces de la Frontera, was organized as part of the Day Without Immigrants general strike, during which people of all ages walked out of work and school to show the economic power of Wisconsin’s immigrant workforce.

Executive director of Voces de la Frontera Christine Neumann-Ortiz, declared that Oct. 11 serves as a reminder to the Biden administration and Democrats. “It is one year to the day that Vice President [Kamala] Harris, as a candidate for office, met with a delegation of immigrant essential workers and their families in Milwaukee and promised that, under the Biden-Harris administration, history would not repeat itself and they would pass immigration reform with a path to citizenship their first year in office.”

Christine Neumann-Ortiz speaks to the crowd at the Federal Building. (Photo | Isiah Holmes)

At that time, it was still unclear whether Joe Biden would be able to unseat then-President Donald Trump. Cities nationwide had been rocked by Black Lives Matter protests, in addition to a global pandemic which bore down heavily on immigrants and other  essential workers.  Trump fashioned itself around hard-line anti-immigration policies including the ban targeting Muslims and a crackdown on undocumented immigrants by Immigration and Customs Enforcement (ICE).

The Monday action was designed to send a single, clear message to Biden and the Democrats in Congress. “They cannot come back to Wisconsin empty handed, they must deliver citizenship this year!” Nuemann-Ortiz shouted to  the crowd. “We are here to tell them that we are not fooled by their excuses that they can’t get it done,” she said. “We know! They have the power! They have the votes! They’re there because Latinos, and immigrants, and you put them there! And we fully expect them! We are not tricked! We demand that they use their power to deliver immigration reform this year.” Neumann-Ortiz noted that congressional Democrats from Wisconsin are back at home until Oct. 18, when they go back to Washington to vote. While they’re here, Voces de la Frontera and other immigrant rights groups intend to make themselves heard.

The shadow of Trump’s anti-immigrant policies has not been entirely dispelled. In September, the U.S. special envoy to Haiti Daniel Foote, resigned in protest over the Biden Administration’s deportation of Haitians. Recently, Border Patrol personnel in Texas were filmed whipping migrants from horseback as they crossed the Rio Grande. 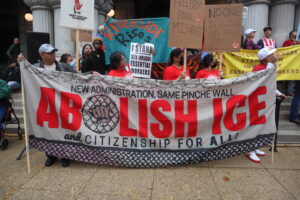 Pastor Greg Lewis, who marched during the Day Without Immigrants protest, stressed that struggles for social justice  overlap. “We are a significant amount to make the difference in any election,” Lewis said to the crowd, speaking of Black and brown voters. He emphasized that, “we have the same issue in our communities also.” Voces de la Frontera organizer Primitivo Torres translated Lewis’ words into Spanish, as he told the crowd,. “We need to work together.”

Starting from Voces de la Frontera’s South Side Milwaukee office, the crowd of hundreds filled the streets, heading towards the Federal Building. Refusing to yield to rain and thunder, the crowd chanted slogans demanding citizenship, and expressing solidarity with one another. After reaching the Federal Building, the marchers set up loudspeakers and stood with banners on the steps. Alondra Garcia, a second grade Milwaukee Public School teacher, was one of the first people to speak.

“I am a very, very proud daughter of immigrant essential workers,” said Garcia. “We know that being undocumented creates a lot of barriers. With or without DACA [Deferred Action for Childhood Arrivals], I know my value. We all know our value, and how essential we are to our community.” Biden has promised to  strengthen the DACA program’s protections. Still, Garcia said that Democrats, with a president and majorities the House and Senate, should do  more. 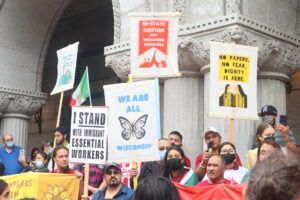 “DACA has given me a lot, but still I’m limited,” she said. “We could really create a country where everyone can thrive and reach their highest potential, no exceptions, if we just work together. We need to demand citizenship for all, now that we are closer than we have ever been before. The time is now. Citizenship needs to be included, no matter what. No more playing the waiting game, we need to see action now!”

Arianna Macias, a teenage student from Racine, and a member of Youth Empowered through the Struggle (YES!), said, “I am not in school today because I am fighting for my family.” “I need to be a fighter, because we get treated unequally. I am the child of undocumented immigrant workers.”

Macias recalled growing up how hard her single, undocumented mother worked, often for low wages. “She also had to risk herself driving in the streets,” she said. “I remember when I was in the fifth grade, I fractured my foot and we went to the pharmacy to get medicine. When we were on the way back, we got pulled over. I was so scared because I didn’t know what was going on.” The officer noted that Macias’ mother was driving without a license, which she could not get because she was undocumented. “My mom got a ticket and a warning to stop driving because she was getting medicine for me,” said Macias. “I am 16 years old. How is it possible that my mom has been here longer, and she can’t get a license or a simple identification? I want change!” 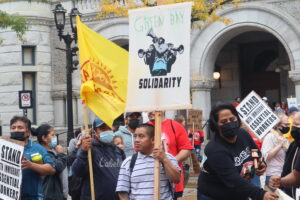 Hiram Rabadan, a small business owner from Fond du Lac, is in a situation similar to  Macias’ mother. Rabadan is undocumented, and has lived in Fond du Lac for decades with his family. “We’ve been good members of the community for over 20 years,” said Rabadan He pushed back against assumptions that undocumented people do not contribute to society. As a business owner, Rabadan pays taxes to the state, yet still cannot get a driver’s license. He said that immigrant families “are hard workers, we’re good members of our community.”

Nuemann-Oritz said Monday’s action is part of the build-up to a national action on Oct. 31. “We are here not just to get a message to our elected officials,” she said, “but also to the people. To other Latinos and immigrants across this country. We know that there’s going to be a roll-out of national actions.” From Chicago to Miami, in New Mexico and California, there will be Day Without Immigrants walkouts by essential workers who help sustain the U.S. economy.  “Because we can not allow Democrats to come home empty-handed,” Nuemann-Ortiz said. “And we know that the people united, when we use our collective economic power, we make a difference. We can win immigration reform this year.”

Need to get a flu shot in Madison County? Here’s where and when you can

6 Months to Live or Die: How Long Should an Alcoholic Liver Disease Patient Wait for a Transplant?