In Milwaukee Rep’s ‘Toni Stone,’ a woman finds herself while playing baseball 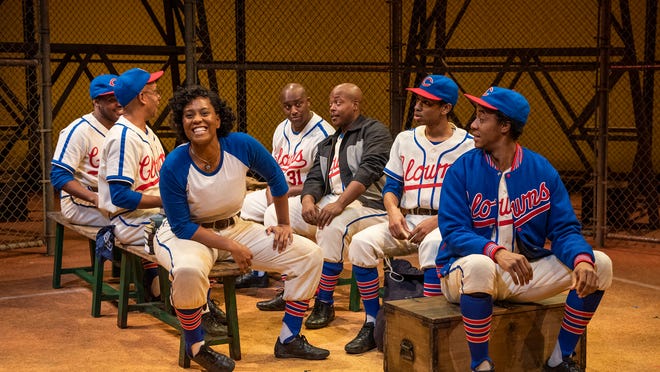 Toni Stone was smart and lucky enough to find out early in life what she wanted to do: play baseball.

However, she was born black and female in segregated America, which put obstacles in her way. But Stone persevered until she became the first woman to play a regular role on a major league professional team, the Indianapolis Clowns of the Negro American League.

The Milwaukee Repertory Theater opened a kinetic production of Lydia R. Diamond’s play Toni Stone this past weekend, directed by Tinashe Kajese-Bolden. (I saw the performance on Sunday.)

It’s an unusual sports drama in several ways, with personality and cultural clashes taking center stage more than match results and individual performances. Baseball geeks will love details, but casual fans of America’s pastime will have no trouble following and enjoying this show.

MORE:“Toni Stone” portrays a woman who let nothing stop her from playing baseball

It’s all centered around Kedren Spencer as Stone, who moves backwards and forwards in time. She says early on that people see her on the field as a 12-year-old boy; In many ways, Spencer’s Stone behaves like a 12-year-old boy who is obsessed with baseball, compulsive talker, optimistic and naive. As Diamond writes to her, she is also literal, needs jokes and innuendos explained to her, and has no filter suggesting she may be on the autism spectrum.

The eight black men who play their teammates, including Milwaukee actor Dimonte Henning, also portray the other black and white people in their lives.

In 1953, after making her name as a backup player, Stone lands a contract with the Clowns, whose white owner needs another attraction after young phenom Hank Aaron is signed by the Boston Braves for his first minor league season was sent to the Eau Claire Bears. But Stone has to reluctantly accept that in this entertainment-oriented league, pitches are occasionally grooved for them to keep fan interest (and box office revenue) high.

Her teammates are unforgettable characters, including Spec (Geoffrey D. Williams), the self-assured bookworm who quotes Harriet Tubman and WEB Du Bois; and Woody (Henning), bitter that Jackie Robinson got the big call he wanted. Woody often pushes Stone; Their culminating confrontation is the play’s most painful scene.

Whether they’re simulating a game or running away from angry white fans, the clowns rarely stop; Dell Howlett choreographed her graceful steps. There’s a lot of banter and camaraderie, but Stone often misunderstands teammates, leading to confusion and resentment. She is so consumed by baseball that she has trouble understanding the men around her who have other things on their mind.

“Toni Stone” is also a coming-of-age piece. She has two guides who gently help her become both a grown woman and a ballplayer: Alberga (Sekou Laidlow), the older man who patiently courts her; and Millie (Enoch A. King), the prostitute who is her first girlfriend. King’s scenes with Spencer are my favorite moments in this production, full of warmth, humor and sometimes irony as we understand what Stone doesn’t.

Toni Stone is a co-production with the Alliance Theater of Atlanta, where this cast will perform in February.