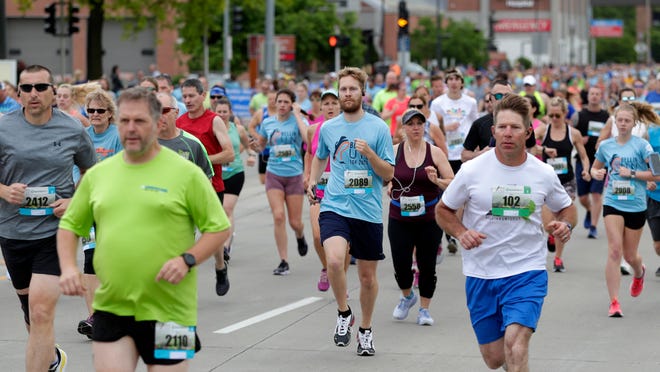 GREEN BAY – A lot has changed in the three years since the Bellin Run had an in-person race, with the COVID-19 pandemic forcing virtual events in 2020 and 2021.

But elite runners Jared Ward and Risper Gesabwa have remained a constant.

Ward, 33, was even more dominating than in his first win in 2019. He finished in 29 minutes, 9 seconds, which was 36 seconds faster than his last time out.

He again beat runner-up Brendan Gregg, who won the event in 2018.

Ward is the first repeat men’s winner since Allan Kiprono went back to back in 2014 and 2015.

Gesabwa, 33, crossed the finish line in 33:11 to win for the third straight time after previously winning five consecutive titles from 2012 to 2016.

In the past 10 years, the only other winner of the women’s Bellin has been Kaitlin Goodman, who pulled off the feat in 2017.

Ward, a Utah native and Olympian, has started to make Green Bay an annual stop.

This was the fifth time he has run the Bellin, which only happened the first time because his coach at Brigham Young University, Ed Eyestone, told him to compete in it.

“It was kind of in my offseason and I was just running a race to run a race,” said Ward, who finished sixth in the 2016 Olympic Marathon in Rio de Janeiro, Brazil. “Over time, I’ve fallen in love with this race. I want to bring my best race. I’m a marathoner, so everything is built around the marathon season. But I’ve been doing some 10K training the last month and a half, because I want to be ready for this race.

“It’s just so fun running in Green Bay. I’ve come to love this city and this race, the health network, the streets. I want to have good races here, so I come a little more prepared.”

The COVID-19 pandemic made things far more challenging for many runners, including Ward. He’s been grateful to have other things in his life, including his wife and five children. Ward has kept busy coaching soccer and baseball.

He traveled a bit less and ran fewer races the last couple of years, but he’s happy to be getting back into the groove. Running and pushing his body as far as it can go is something he still loves to do.

Ward finished 10th at the New York City Marathon in 2021 and 26th in the Boston Marathon in April.

“I think the pandemic kind of had a different effect on everybody, but it was hard on everybody,” Ward said. “We went into the pandemic right after the 2020 Olympic Trials, where I didn’t race as well as I had hoped. It kind of put me in a slump during a time when there wasn’t any races to help pull me out of it and kind of reset that mindset.

“The last few years have been tough. It’s been climbing out of a pit. But I feel like now I’m back on the right track and, hopefully, progressing again.”

Ward plans to compete in the Bellin next year to go for a three-peat.

If he can pull it off, he’d become the first men’s runner to win three straight since John Kipsang Korir pulled off a four-peat from 2005 to 2008.

Eyestone, Joseph Kimani and Kipsang Korir are the only three to win at least three straight titles since the Bellin started in 1977.

“Oh man, this race is one of my favorite races,” Ward said. “I do a lot of races because I run professionally and where my agent sends me is where I run.

The 2012 Ashwaubenon graduate was a two-time state qualifier in the 3,200-meter run and the 1,600-meter relay in track and a three-time all-conference performer in cross-country before competing at the University of Wisconsin-Eau Claire.

Despite growing up in the area, Cooper finally competed in his first Bellin Run. He figured it would be a fun race to show off some fitness.

“Normally, right after school gets out, my family and I would go to our cabin in northern Wisconsin,” Cooper said. “Ever since I was little, that’s what we did. So, we never made it to this race, but super excited to run it today.”

Cooper finished third in his debut with a time of 30:43.

“I’d like to come back in future years,” Cooper said. “And try to one up that.”

Community update from Kenosha Vocational Ministry: The consistency of change |