Johnson, other Republicans rally in Racine for last-minute election push 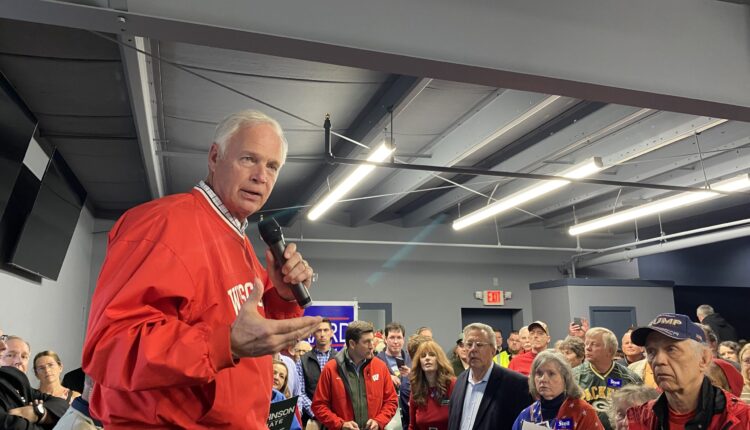 As part of a 60-stop bus tour, US Senator Ron Johnson (R-WI), US Representative Bryan Steil (R-Janesville), and Tim Michels, candidate for governor, made a stop at Angry Brothers Pub, 6501 Washington Ave. , to energize their base before the midterm general election on Nov. 8.

Johnson told the crowd of about 150 people not to count anyone out in persuading people to vote Republican.

“Someone’s got to be the adult in the room,” Johnson said. “And it’s got to be us. We need to strengthen this country by unifying it, healing it, and saving it.”

In a rally held last week, Barnes focused on today’s middle-class challenges. He spoke of Johnson’s interest in the gun lobby over Wisconsin’s children and his desire to raise the retirement age to 70.

“If you choose to work that long, go ahead. That’s fine. But nobody should be forced to work into their later years,” said Barnes.

“What it means to me is, do you want your family to be safe?” she said “Do you want your children to have a good education? Do you feel people should be able to earn a decent wage and be able to afford to live in the United States of America?”

Johnson avoided the discussion on abortion. He once supported a national abortion ban, but in early October, he told a Rotary group in Milwaukee that he would like a referendum on the issue. He sent a sample ballot to the Milwaukee Journal Sentinel.

Marquette poll: Governor’s race will likely be a nail-biter, again

Despite promises of a red wave, a Marquette Law School poll released on Nov. 2 called the US Senate and governor races “tossups” one week before election day.

During his time on stage, Michels pointed to increasing crime, school test scores being down, and the need for election reform.

“Our plan is simple; we need to make it easier to vote and harder to cheat,” he said. “Politicians in Madison have made a mess of our elections, and I won’t let that continue. This is a Wisconsin Voter Protection Plan, plain and simple. I’m pleading that as governor, addressing the election mess will be among the first things I do on my very first day in office.”

READ: Who’s on the ballot?

Steil platform focuses on energy prices and the economy

Rep. Bryan Steil focused his remarks on the economy, specifically around inflation and gas and food prices.

“Under one party democratic control, people are getting crushed,” he said.

To which party Steil refers is unclear given the Republican majority held in the Senate. He also didn’t mention the coronavirus pandemic and the impact supply chain issues are having on the economy not just here in the US but also around the globe.

According to the US Labor Department, the annual inflation rate for the United States is 8.2% for the 12 months ended September 2022 after rising 8.3%. Over the past two years, prices have soared because of basic supply-demand issues, according to University of Wisconsin-LaCrosse economics professors John Nunley and Adam Hoffer.

“In short, during the pandemic, we saw supply chain disruptions (decreased supply) combined with a massive increase to the money supply (increased demand). Basic economics tells us that less supply combined with greater demand means higher prices,” Hoffer wrote in a June 3, 2022, post for Currents, the UWL blog.

Steil criticized Democrats and President Joe Biden around his energy policy, saying that Biden went to Saudi Arabia, he said, to “beg for oil and gas” when he should have been tapping into the US oil supply.

“We need to unleash American energy not just to lower costs to the pump,” Steil said.

Nunley and Hoffer in their blog post highlighting the Russian invasion of Ukraine and the reduction of oil extraction from Russia and other OPEC (Organization of the Petroleum Exporting Countries) nations, essentially gutting global supplies, as the primary causes of rising gas prices.

“Many rich countries won’t buy from (Russia) anymore given their invasion,” the post reads. “Members of OPEC and Russia have been cutting their extractions. For prices to fall, oil supply will need to rise and/or oil demand will need to fall.”

At the end of his speech, Steil predicted that the election would be close, likely coming down to the final hour of the last day. But he also surmised that a red wave would be imminent.

“You should make sure and let your Democratic friends know if they got flood insurance because I think there is going to be a red wave on Tuesday,” he said.

Sen. Ron Johnson (R-WI), Bryan Steil (R-Janesville) and Tim Michels, candidate for governor, sought to energize their base at a rally held Saturday, Nov. 5, ahead of the Wisconsin midterm election Tuesday.

In a speech at a rally held Saturday, Sen. Ron Johnson made the claim that primary and secondary schools were teaching critical race theory.

“You know, rather than teaching the basics, as Tim (Michels) was talking about, they are teaching critical race theory exacerbating the racial divide,” Johnson said. “They’re teaching 1619. They’re teaching transgenderism. Again, these people need to be stopped.”

Johnson’s statement is not accurate.

Primary and secondary schools are not teaching critical race theory as it is taught in higher education, according to the Wisconsin Department of Public Instruction.

READ: What is critical race theory?

With that said, teachers at primary and secondary schools do teach students about race and racism.

“To do anything else would be a blatant disregard for the truth of our country’s history and an erasure of the lived experience of our students,” said State Superintendent Dr. Jill Underly on equity, inclusion, and diversity in an editorial written in April. “Teaching about race and racism is the only way to teach the complete story of the United States.”

What changes Michels wants to make in how Wisconsin votes

Among the items Michel wants to change:

Evers vetoed many of these items this year.