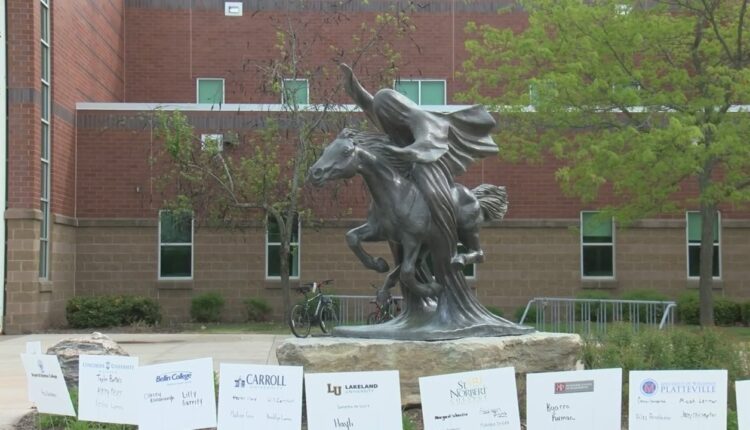 KAUKAUNA, Wis. (WFRV) – The Kaukauna Galloping Ghost statue will remain in front of the high school but now the district administration is tasked with creating a plan to add signage to explain the significance of the statue after some said it bears too close of a resemblance to Klu Klux Klan imagery.

“It’s something that’s been going on honestly since the statue was put up 20 years ago,” said Chris McDaniel, the Kaukauna High School Principal. “Everyone knows the intent was not to be any kind of hateful symbol but people walk in and might have that perception when they see it.”

The board approved $25 thousand to put a ‘Home of the Galloping Ghosts’ sign in front but did not give the additional money for an LED sign to go alongside it. The board is considering donations or fundraisers for the additional signage.

There are mixed opinions in the community, some said do nothing, others are in favor of a sign and some want it removed. Two people spoke on the issue at the meeting, one was in favor of signage and the other said the current price was too high.

“The signage proposed speaks to this home. We welcome people to our home,” said Giovanna Feller, a Kaukauna alum. “I urge you to support the signage.”

Brian Roebke, another Kaukauna alum said, “It appears the proposed solution to the ghost statue is throwing $20 thousand at the problem that could be solved with a $500 vinyl sign.”