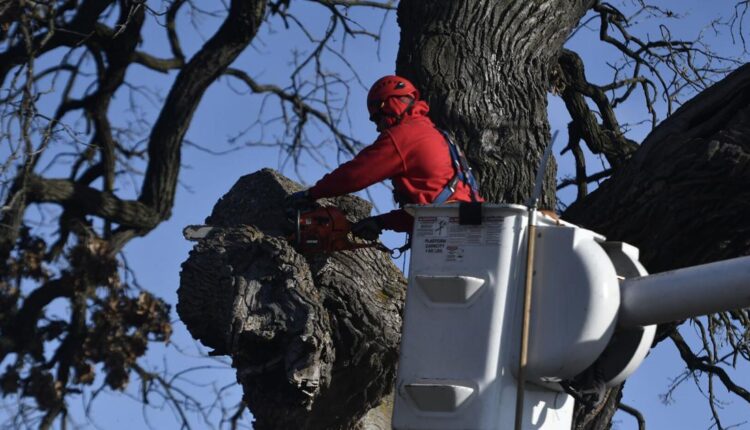 Last week, a tree as old as the United States itself came down in front of the First United Methodist Church, 919 60th St.

The burr oak stood on the northwest corner of the church property. About 54 inches across at its widest, it was estimated to be about 248 years old, meaning it was just a sapling the day the American colonies sent a strongly worded letter to the King of England in 1776.

Lloyd Kirk, a member of First United Methodist Church and the trustee in charge of the tree, recalled the day he first moved into Kenosha.

It was 1944, and Kirk was about 7 years old, riding in a car away from the family farm.

As crews stripped away its branches, he remarked on the change taking the tree down created. “Sheesh. It looks kind of naked now.”

In the more than two centuries that it stood, the oak was witness to radical changes in Kenosha. The small settlement at the mouth of the Pike River, created in 1835 by the Western Emigrating Company, slowly transformed into the city we know today, with homes, stores and factories popping up as the oak reached skyward.

The tree would see some of the greatest wealth the city could offer in the late 19th century, standing in the yard of Zalmon Simmons’ Kenosha home. The wealthy businessman, manufacturer and politician founded the Simmons Bedding Company, which still exists today.

Decades later, it would see Kenosha-manufactured automobiles puttering around town, with the first Jeffery Rambler rolling off the production line in 1902.

Through the 20th century, Kenosha’s automotive industry would rise around the stately oak. American Motors’ Ramblers, Matadors and Gremlins and Renault Alliances all drove past the tree. And in the early 2010s, perhaps it saw the dust from the 52nd Street Chrysler Plant’s demolition.

For the last 93 years, the tree has been a fixture at First United Methodist Church, the seventh Methodist Church in Kenosha, built in 1929 through the stock market crash and dedicated in late December of the same year. By then, the oak tree was already 150 years old.

Despite attempts to revive it, Kirk said they realized the tree had to be removed, or it could cause serious damage or even injury.

“We’re all saddened by it,” Kirk said. “To me, it was a Kenosha landmark.”

It took more than a day of work to take down the burr oak. Cassity Tree Service of Sturtevant brought in wood chippers, multiple trucks, a crane and more to safely remove the tree.

Workers were impressed when they arrived Wednesday morning to begin their work.

“I’ve worked in this company for eight years, and I’ve never cut down a tree like this,” said Jose Villagomez. “It’s pretty big.”

Now all that’s left is a 54-inch wide stump and a few logs that Kirk said he hopes to turn into souvenirs for church members.

Although Kirk said the church will likely do something eventually with the tree’s former spot on the church grounds, there are no immediate plans.