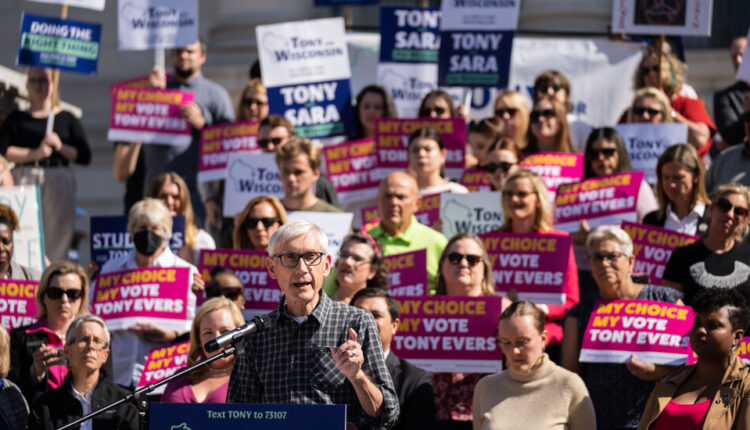 KENOSHA, Wis. — Joy Ermert, 46, the owner of Lulu Birds, an antique shop in downtown Kenosha, is a staunch Democrat who voted for Gov. Tony Evers four years ago. She admires his commitment to social justice and reproductive rights, she said.

Only one thing hath made her hesitate as she considers casting a ballot for him again: the riots.

In Kenosha, that’s shorthand for the harrowing events of August 2020, when a police officer shot Jacob Blake, a 29-year-old resident, during an arrest. The shooting, during a summer when the United States was being roiled by racial justice demonstrations after the murder of George Floyd in Minneapolis, prompted protests, looting, fires and destruction in Kenosha that lasted for days.

Two years later, Mr. Evers’s handling of the unrest has Ms. Ermert questioning his leadership. Now, as Mr Evers enters the final days of a tight re-election contest facing a Republican challenger, Tim Michels, she is still asking: Did Mr Evers err in releasing a statement hours after the shooting of Mr Blake that seemed to criticize the police officer and suggest that the episode was motivated by racism? Could the governor and other officials have done more to stop the unrest? Who was responsible for what happened?

The questions come at a time when crime has become one of the top issues for voters nationally and in the midst of an excruciatingly close race in a key swing state. Now, more than a few voters in Kenosha, Wisconsin’s fourth-largest city and a longtime Democratic stronghold, are wondering whether a drop in support for Mr. Evers in Kenosha could play a major role in the outcome of the race. And it’s clear that he’s struggling to quiet those concerns.

“I think Evers is going to have a hard time in Kenosha,” Ms. Ermert said. “He’s got to fight for himself here. He needs redemption.”

Kenosha should be a solid hub of Mr. Evers’s support as he crisscrosses Wisconsin in an election that could be decided by only a handful of votes. The lakefront city of 100,000 people has long been a democratic-leaning place whose identity was shaped by automobile manufacturing and labor organizing.

Mr. Evers has won big in Kenosha before: In 2018, Mr. Evers, then the state schools superintendent, beat Scott Walker, the incumbent Republican governor, by a margin of less than 30,000 votes statewide, winning 49.5 percent of the votes cast. In Kenosha, he won close to 60 percent of the vote. He still has strong support in the city, and is seen by many Democrats as a crucial check on Republicans who have a near-supermajority in the heavily gerrymandered State Legislature. “He’s all we’ve got,” said Nathaniel Wells, 84, a Kenosha resident who had placed signs supporting Mr. Evers and Lt. gov. Mandela Barnes in his front yard.

Yet some Kenosha voters said they had since soured on Mr. Evers — along with Mr. Barnes, who is hoping to unseat Senator Ron Johnson, a Republican. Some said they saw Democratic leaders as unable to keep them safe, noting that shootings and homicides spiked in Kenosha in the year after the civil unrest.

The shooting of Mr. Blake in 2020 unfolded after police officers arrived at an apartment complex in Kenosha in response to a domestic complaint. When they tried to take Mr Blake into custody, and unsuccessfully used a Taser to subdue him, one officer, Rusten Sheskey, repeatedly fired his gun into Mr Blake’s back. (The top prosecutor in Kenosha later declined to bring charges against the officer. Mr. Blake, who is partially paralyzed, has since moved to Chicago.)

The State of the 2022 Midterm Elections

After a brief cellphone video of the shooting spread widely on social media, demonstrations, looting and fires erupted; On the third night of the unrest, Kyle Rittenhouse, then a 17-year-old living in Illinois, shot and killed two men in an act that a jury last year ruled was self-defense.

During the unrest in the days after Mr. Blake’s shooting, many Kenosha residents feared that their residences would be set aflame, and some left home for days until they felt it was safe to return.

Those anxieties about personal safety are still rippling through Kenosha and beyond. A recent survey by Marquette University Law School revealed that the top five issues that Wisconsin voters said they were “very concerned” about included gun violence and crime. Though homicides increased in 2021 in Kenosha, they have decreased significantly so far this year.

Mr. Michels, the Republican challenger, has made Kenosha and Mr. Evers’s response to it a central theme of his campaign. At a round table event in Kenosha in August, he said that Mr. Evers had failed to deploy enough resources to protect the city.

“Kenosha was ignored, and as a result Kenosha burned,” he said.

David Zoerner, a Republican who is running for Kenosha County sheriff, has joined in the criticism, telling voters that “liberal leadership failed Kenosha” in 2020. His campaign has distributed yard signs that have popped up all over town that read “Make Kenosha County Safe Again.”

At least one prominent Republican in Kenosha defended Mr. Evers: David Beth, the longtime sheriff of Kenosha County, said in an interview this month that attacks on Mr. Evers were nothing but politics. Sheriff Beth, who endorsed Donald J. Trump for president in 2020, said that Mr. Evers sent all the National Guard members that were requested at the time.

“I don’t blame anybody for what happened except for the rioters who came,” Sheriff Beth said. “It’s campaign time right now. They’re looking to discredit someone. And I have no one to discredit.”

Two years later, scars from the rioting still remain in Kenosha. On the main commercial street in the Uptown neighborhood where much of a city block was burned, several charred, crumbling buildings have been torn down, yet to be replaced.

During a visit to Kenosha this summer, Mr. Evers, in a brief interview, said that he had responded with every possible resource to the unrest.

“I did everything that they asked me to do,” he said of local elected officials. “Is the other side going to lie and do whatever they can? Of course they are. They’re politicians.”

As Mr. Evers shook hands and chatted with customers at a coffee shop, Brooke Ohl, 38, walked past him without stopping. His presence was a reminder of the frustration and the fear she felt in August 2020, she said.

“I felt like he did nothing to help us,” said Ms. Ohl, who works as a manager in a dental office. “I’m sure he’s a very nice man. But he should have gotten us some more help.”

Mr. Evers’s supporters have been spending the final days before the election trying to convince voters that in 2020 the governor did everything he had the power to do. On Monday, as Mr. Evers stopped in Kenosha to accept an endorsement from the local firefighters’ union, Joseph Sielski, the vice president of the union, introduced the governor by trying to debunk the widely repeated narrative that Mr. Evers had failed to send in the National Guard.

“I’m going to go over some of the lies that were spoken of the governor’s actions in regards to the civil unrest in my hometown, the town I currently reside in, the city of Kenosha,” Mr. Sielski said. “I recently saw a political ad from the governor’s opponent that stated that it took the governor days to dispatch the National Guard. That is an outright lie.”

Anthony Kennedy, a city alderman whose district includes the block where Mr. Blake was shot, said that criticism of the handling of the civil unrest had been a running line of attack not just in the governor’s race, but in local, county-level races in the past two years.

“I’m calling it the Kenosha big lie,” said Mr. Kennedy, a Democrat who holds a nonpartisan seat as an alderman. “The people who are out here using this for their own political gain, shame on them.”

Mr. Kennedy said that Mr. Evers and Mr. Barnes had been instrumental in helping the city recover, asking local elected officials what kind of funding and resources were needed, and visiting frequently to show support. A spokesman for Mr. Evers’s campaign pointed to millions in federal funding that the governor has committed to Kenosha for rebuilding efforts.

Still, the suggestion that Mr. Evers failed Kenosha residents has become so pervasive that it could harm his re-election prospects, Mr. Kennedy said.

“I think it’s going to be very damaging,” he said. “They have an issue, and it’s a potent one. I’m not going to deny the emotional weight that’s behind this.”

Stacy Juga, who works in the area of ​​downtown Kenosha that was heavily damaged after Mr. Blake’s shooting, said last week that the civil unrest had left residents looking for someone to blame, without success.

“I do believe Evers made mistakes,” she said. “Would I vote for him again? Possibly.”

Echoing a common sentiment among people in Kenosha, she added: “It makes me not want to vote at all.”