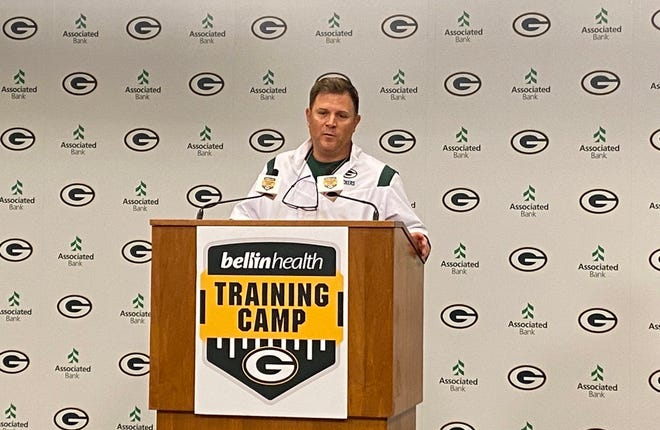 The Green Bay Packers open 2022 training camp with a practice on Wednesday. Refresh this page for updates from Ray Nitschke Field.

Galleries:Check out some of the highlights from our Green Bay Packers photo archive project

Matt LaFleur arrives excited for the start of his fourth season

Head Coach Matt LaFleur kicked off his fourth season with the Green Bay Packers on Wednesday, arriving excited and animated for the first day of training camp.

Reality will quickly set in, however, as LaFleur begins practices without his All-Pro left tackle, David Bakhtiari. Earlier in the day, general manager Brian Gutekunst revealed Bakhtiari suffered a setback in his ACL recovery during the regular season finale versus the Detroit Lions, calling it a “significant injury.”

LaFleur joked he no longer pays attention to timelines but is now tasked with working around Bakhtiari’s continued absence and unsure when he’ll return.

“I know we’ve talked about this quite a bit. I can tell you this, I’m not a doctor and that’s not my area of ​​expertise. As soon as they clear him, he’ll be ready to go from what I’ve seen. I know Dave’s doing everything he can,” LaFleur said.

It was revealed over the weekend that LaFleur and Gutekunst had both received contract extensions with the Packers.

The Packers will welcome the public to open training camp practices on Wednesday, Thursday and Saturday this week, all at 10:30 am.

Packers coach Matt LaFleur said that quarterback Aaron Rodgers looked like he was in good shape after skipping almost all of the off-season workouts.

LaFleur said he saw the clip of Rodgers walking through the parking lot into the facility with his tank top on that was spread widely on social media. He joked that he looked like Nicolas Cage, but he couldn’t remember Cage’s name and asked his public relations chief Jason Wahlers to remind him who it was. “I’m not a big movie guy,” he said.

LaFleur said that Rodgers “did well in the run test” that the Packers do at the start of camp to see what kind of shape the players are in and whether they might have any ailments.

Asked if he thought he would have to be more careful with Rodgers in the early part of training camp after the quarterback missed all the organized team activities, LaFleur said that he would handle things similarly to previous years. He said they generally have a plan for Rodgers and the number of throws he’ll take as they begin camp.

LaFleur said it would be crucial for Rodgers to get in tune with his receivers, who have been catching passes from backups Jordan Love and Danny Etling all off-season. The Packers begin practice today in shorts and helmets.

Green Bay Packers general manager Brian Gutekunst said during his season-opening news conference Wednesday that left tackle David Bakhtiari had another procedure on his ailing knee, but the club is confident that he will be back on the field this season.

Bakhtiari, who tore his ACL in December of 2020, missed all but a few snaps last year because of complications with the knee. He wound up having a second procedure in the middle of the ’20 season, attempted to come back for the playoffs and was shut down after the last regular-season game.

Gutekunst wouldn’t say when Bakhtiari had the third procedure, but the veteran begins training camp on the physically unable to perform list (PUP), which means he didn’t pass his physical and won’t practice until he does. If Bakhtiari stays on the PUP the entire camp, it’s possible he could stay there at the start of the regular season. He would be required to miss a minimum six games if still on PUP.

Gutekunst said that Bakhtiari “worked his tail off” to get back, but he would not put a timetable on when he might practice. Bakhtiari missed all of the off-season workouts.

With Bakhtiari still out, it’s likely Yosh Nijman will start out at left tackle. Nijman is also an option at right tackle. How the club lines up on the offensive line will be clear once practice begins.

Gutekunst also said that defensive lineman Dean Lowry and running back Patrick Taylor will be removed from PUP and will practice today. In addition, he said that wide receiver Sammy Watkins’ stay on PUP will be a very short-term thing. I think you’ll see him out there very soon.”

The GrPackers are unlikely to add a veteran wide receiver in the near future, general manager Brian Gutekunst said during his season-opening news conference.

The Packers reportedly showed some interest in former Atlanta and most recently Tennessee receiver Julio Jones — who signed with Tampa Bay Tuesday — but Gutekunst said he and his personnel staff were mostly just checking in on possible options and not necessarily in the market to add anybody. The Packers had veteran John Brown in for a workout this season, but they did not sign him, more than likely just checking to see what kind of shape he was in if they came up short at the position.

The Packers have 11 receivers on the roster and Gutekunst said he really likes the group.

He said the market isn’t very good right now and it’s more likely the Packers would address the position at the end of training camp if they feel a veteran is necessary.

The Packers will be without second-round pick Christian Watson (PUP) and veteran Sammy Watkins (NFI) for the start of training camp. He said he didn’t think either injury was long-term.

Tweets from our reporters