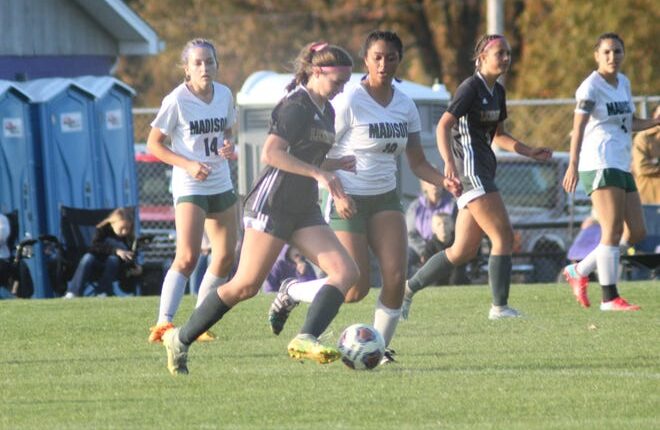 LEXINGTON — If you happened to be in attendance for Saturday’s Division II girls sectional final between Lexington and Madison, you saw a suspense thriller in which the final outcome was uncertain in more ways than one.

And that’s not in cinematic terms, the likes of which the late, great film director Alfred Hitchcock mastered during The Golden Age of Hollywood.

No, we’re talking sports, baby! An edge-of-your-seat 1-1 match that Lexington squeezed by 3-2 on penalty kicks over Ohio Cardinal Conference rival Madison to earn a sectional title and advance to Wednesday’s district semifinal against visiting Clear Fork. It was the teams second meeting of the season, with Lexington earlier winning 2-1 on the road.

“I think going into it, we’re both good, competitive teams against each other. Like, Madison had always been one of our biggest competitions,” said Lexington midfielder Macy Chambers, who made the game-winning penalty kick. “Even after Taylor Huff left they were still big competition for us. After our first win against Madison this year, it set us up on an uphill motion. After that, we came into this game knowing we had to work for it. They said they wanted revenge.”

From the jump, it was a fierce battle. Lexington (9-5-3) pressed hard up top early and mostly prevented Madison (8-10-1) from getting out of his own half of the field while also defending pretty compactly in the defensive third. There weren’t many shots on goal for either team for the majority of the first half, but around the three-minute mark Lady Lex found the back of the net when Kaylee Brown made a run toward goal, received the ball and played a low Cross near the back post to forward Olyvia Stoots, who tapped it in for goal and a 1-0 halftime lead.

In the second half, the intensity picked up even more. Nothing was easy for either side.

When Lexington was on the break numerous times on counterattacking opportunities, Madison defenders Mylah Davis and Taylor Tucker were there to cut off any attacks or put any Lexington player on their back. If Madison — which created the better chances in the second half — drove at Lexington’s defense, it was halted by everyone from Chambers to Olivia Workman to Addy Boyce to Zoe Borowicz to Maddie Hughes to Aubrey Coleman.

Lady Lex were flying to the ball, making tackles, key clearances, interceptions, slide tackles and knocking whoever they needed to knock down. And we can’t forget about the job goalkeeper Mollie Worley did back there, too. Bodies were hitting the ground left and right for both sides. Chambers and forward Makeena Arnholt both went out of the game in the second half with injuries, indicating how rough the play was.

Just when it looked like Lexington was on the verge of clawing its way to victory, the Rams hit back with nine minutes left to play when Kendyll Kershner took a corner kick that took a high bounce and landed in the penalty box at the feet of midfielder Natalee Back, who struck it past the goalkeeper with her left foot to even things up at 1-1.

“I thought in the first half it was nice to get one and we controlled things well. I was hoping we could hang up another one,” said Morton. “Then in the second half, they were much better than us, I thought. They got to the ball better. They were passing it better than us, controlling things better. To get all the way down to nine minutes and give up that goal , that was tough. We probably could have just cleared and played defense for nine minutes, but that’s the way it goes.”

“It was just that we had to come together as a team at that point and not turn on each other,” said Chambers of the late goal Madison. “When you get in that position, it’s very stressful. Everybody gets mad but we can’t tear each other down.”

The match went into a 15-minute overtime with the next goal deciding the winner. It was more of the same — raw ferocity displayed with both teams giving every ounce of effort to prevent the other from scoring while trying to create that one efficient chance in front of goal that could be the final decider at the other end of the pitch. After both teams failed to score in the first overtime period, it went into a second — which ended the same way.

The term “suffered” — the mental stress of dialing up effort and concentration levels to weather the difficult moments during a game — is often used at the European soccer level, but for this match it applied without a doubt. Both teams suffered in this one.

The final went to penalty kicks, with Lexington winning 3-2 in the shootout when Chambers nailed the goal-ahead kick that turned out to be the game-winner. It was followed by Madison’s Davis hitting the crossbar to miss her penalty kick, setting off euphoria for Lady Lex, who celebrated on their home turf after beating a dejected Madison for the second time in 2022.

“I was so nervous,” said Chambers on the crucial penalty kick. “It was basically the make-or-break kick. They just told me that before I walked up there, too. The long walk across the field. You find your spot and you hit it.”

“To go to a shootout, it’s so hard,” said Morton. “The nerves — you can’t replicate that in practice. For Mollie to save one and for our girls to finish three out of four, that was really good. It’s huge for our program. We’ve been at this level before. For us to do it against a great conference team like Madison who have been winning districts in our area is huge for us.”

“Same as the first time we played them,” said Madison coach Zac Huff of his assessment of the match. “We couldn’t find the back of the net when we needed to. We possessed the ball well. Just in the final third we couldn’t do it.

“Tough lost. Tough to see these seniors go out. We’ve had a rough season. We’ve played some good competition and we just couldn’t find that potential goal scorer at the end of the day. Good luck to Lexington when they play Clear Fork on Wednesday.”

“The team is so happy,” said an excited Chambers, a senior. “We’re so blessed to have this moment together, especially since for some of us this could have been our last game together. We’re all so happy and we’re not going to take it for granted.”

Get your library card at the Racine Public Library