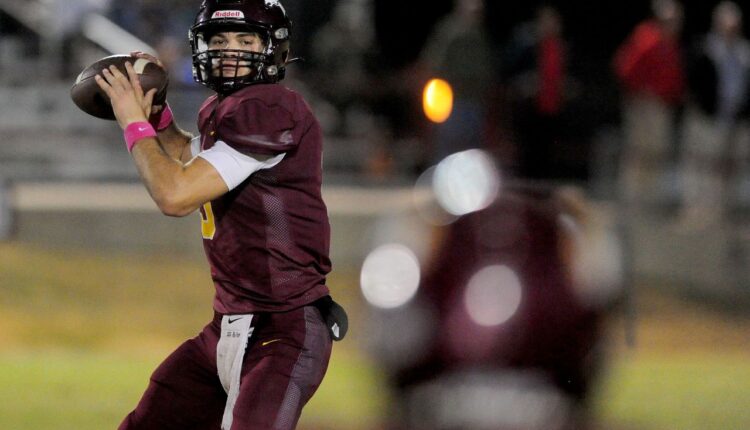 The last time Madison Academy appeared in the Class 3A state football playoffs in 2015, the Mustangs lost in the third round – their first exit from the tournament after three consecutive championships.

This Friday, Madison Academy will be back in the 3A playoffs after playing two years in 4A, two in 5A and a couple more in 4A. The seemingly constantly reclassifying Mustangs will host Phil Campbell at 7 pm at Bill Washington Stadium in Huntsville in a first-round playoff game.

Early in the season, it may have looked to outsiders that Madison Academy would have been on the outside looking in after losing 17 seniors – nine who signed to play college football – from the 2021 team that finished the regular season at 9-1 and ranked No. 1 before falling in the semifinals to Oneonta. This year’s Mustangs started the year by losing by a touchdown to Deshler and by a couple to Randolph – a first-ever loss to the Raiders.

The 0-2 start didn’t shake Bob Godsey’s preseason assessment of his young squad. “I felt we could win the region,” said Godsey, who is 35-11 in his fourth season at Madison Academy. “You never know what a season brings with a young team. I wasn’t sure, but I felt like it would all come together – just when? It was a matter of time.

“We lost to two really good teams (Deshler finished 10-0 and Randolph is 8-2). Those were games that we didn’t really play bad, we just made some crucial mistakes that cost us the games. It was a matter of growing up and playing with more confidence.”

During that growth spell, the Mustangs won eight straight games to win Region 7, allowing its region opponents just 3.5 points a game while scoring 52.5. Madison Academy, ranked No. 10 in the final Alabama Sports Writers Association regular-season poll, shut out three teams and the other three scored 7 points each.

For the season, the Mustangs average 47.4 points per game, gaining 503 yards per outing. Madison Academy averages 273 yards through the air while running for 230.

Leading the way is second-year starting quarterback Carson Creehan. The 6-foot-4, 210-pound senior has passed for 2,221 yards and 21 touchdowns with 3 interceptions. He completed 65 percent of his throws (119-of-184). Creehan has also gained 526 yards and scored 7 times on 55 rushing attempts.

“He’s an extremely hard worker,” Godsey said. “He played 14 games for us last year and became one of our leaders. The No. 1 thing you have to have for a quarterback is toughness and he certainly has that. This team respects that. In our first couple of games he rushed for 100 yards and passed for 200 in both of those games. In both of those games, he exhibited the toughness a quarterback has to have and they rallied behind that.”

Shouldering the load in MA’s rushing attack is Ken Cherry, a 6-foot, 187-pound junior. Cherry has 1,289 yards on 116 carries with 20 TDs. He also plays linebacker for the Mustangs. Wide receiver/defensive back Mario Brewer, a 5-6, 132-pound senior, has 37 receptions for 670 yards and 8 touchdowns.

“Daylen Johnson (a 6-1, 297-pound senior) and Hayden Knight (5-11, 220, senior) have been mainstays for us starting on the offensive and defensive line,” Godsey said. “They have done an outstanding job leading our team.”

Godsey also praised Reese Baker’s junior right offensive tackle, who has offers from Troy and had a recent visit to Auburn. Baker is 6-5, 260 pounds. Junior center Brock Horton, 5-11, 225, joins Baker as a three-year starter for the Mustangs.

“Matt Manley (6-0, 188, senior) has done an outstanding job for us at free safety in his first year back in the program.

“We have five sophomores starting on defense and early in the season it took time for us to find our groove over there,” Godsey said. “Guys like AJ Rice (6-2, 228, linebacker), Keaton Watson (5-10, 175, defensive back) and linebacker Josh Williams (5-8, 176) are young guys finding their way a little bit.”

“They are a good team, a seasoned team,” Godsey said. “They seem to be very physical. They give you a lot of different looks on offense and are very aggressive on defense. If we don’t play well, we won’t win.”

Haven’t Seen Your Doctor in a Few Years? You May Need to Find a New One