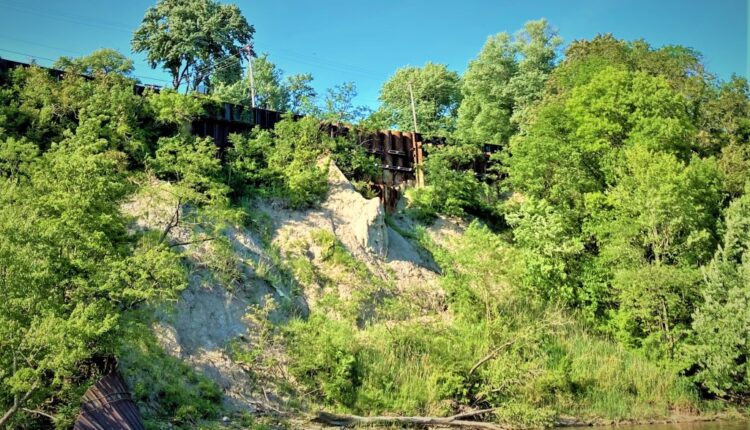 Madison Avenue, leading from Painesville Township into East Main Street in Painesville — between Casement and Woodworth avenues — has been closed to all traffic due to structural issues with the retaining wall overlooking the Grand River.

The Lake County Engineer’s Office became aware of the failing wall on the south side of the road and has determined that additional inspections and evaluations regarding the structural integrity of the wall are needed.

The road will remain closed until the results of the study are available.

Drivers should not try to drive around and/or move the barricades to gain access.

Madison Avenue between Casement Avenue and Woodworth Avenue in Painesville Township will be closed to all traffic until further notice. (Bryson Durst — The News-Herald)

Due to the “physical disaster to the wall,” Engineer Jim Gills has recommended “immediate repairs, noting, during a May 31 special meeting of the Lake County commissioners, that the wall is “actively moving and presents a real and present emergency to the traveling public.”

“We’ve been told this is ‘unacceptable,’ however, I think the alternative is not ‘acceptable’ either….” Gils said, addressing the board. “Nobody planned this. This is a nasty section of the wall, too, because the river is about five or six feet away from it and it is taller than the other section, almost twice as tall and so it is a very scary long drop.”

As a result, Commissioners John Hamercheck and John Plecnik adopted an emergency resolution to develop plans and specifications to solicit bids to repair the wall.

“We are moving along on this as quickly as possible,” Gills said, noting a June 1 on-site evaluation meeting with Great Lakes Construction Co., engineering/architectural firm Burgess and Niple, and representatives from Painesville and Painesville Township.

Additionally, Gills said the office has heard from the US Army Corps of Engineers, which has advanced the department’s application to Washington, DC

“The government works very slowly, so we won’t be hearing from them for a little while, but they’re monitoring (the situation) and want all the information on what we’re doing right now they want right away.”

Happy to be back, Rasul Douglas likes direction of Packers’ defense