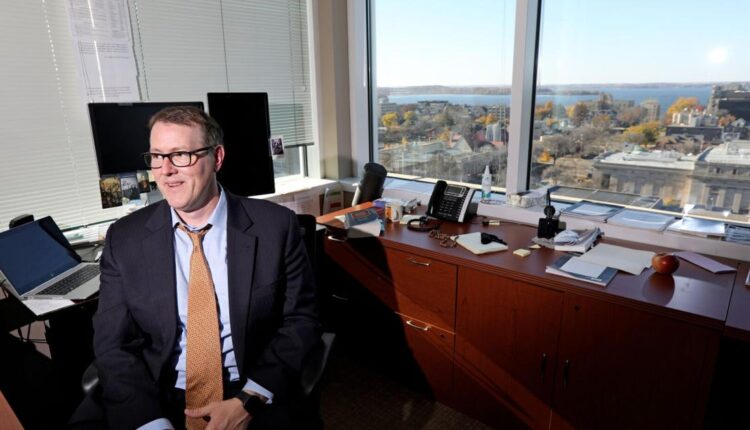 Joe Bugni, supervising attorney in the Madison office of Federal Defender Services of Wisconsin, says he was drawn to criminal defense work after he had considered becoming a priest. He represents people accused of federal crimes who cannot afford a lawyer.


He’s just 44, but the walls and shelves of Joe Bugni’s office at Federal Defender Services of Wisconsin are already filled not only with family mementos but with reminders of the clients he’s served during his career representing the indigent in federal court.

A chocolate bar from the family of one client. A bottle of wine from another, still unopened. Photos, drawings, letters, a memory box from a client whose case Bugni said was “my first big win ever.” Something else from a client Bugni calls “the best human being I have ever known.” There’s a story with everything.

A Milwaukee native, Bugni is the son of a factory worker and a special-education teacher who became a school principal. At 6-foot-4, he played offensive tackle for Riverside University High School’s football team, then played four years at Cornell University, two of them as a starter.

The pros did not come calling, not that he would have expected that.

“I was fine for the Ivy League, but that was it,” Bugni said.

With an undergraduate degree in economics, Bugni joined Teach for America. But after a religious conversion at 22, he thought instead about becoming a priest. In the meantime, living in Madison he worked at the Great Dane and at a group home for men with developmental disabilities. After realizing the priesthood was not for him, he married his now-wife Kirsten, whom he met at Teach for America.

They now have six children, ranging in age from 16 years to 19 months.

Bugni attended law school at the Ave Maria School of Law in Ann Arbor, Michigan, a Catholic school that has since moved to Florida.

“At Ave Maria, it was just really about like the person and the dignity of people,” Bugni said. “And so I really enjoyed that. And it was a deep immersion in the law.”

Bugni then was clerk for a federal judge in the Southern District of Florida for three years before spending two years in Indiana as a clerk for Judge Daniel Manion of the US Court of Appeals for the 7th Circuit.

A desire to become a criminal defense attorney led Bugni to a job at Federal Defender Services of Wisconsin, located in Milwaukee. It’s a private firm that’s funded by a federal grant to represent indigent criminal clients in federal court. After three years in the Milwaukee office, Bugni became supervising attorney of the firm’s Madison office, where he has been for seven years.

“Joe’s Shield of Silence,” on the door of Joe Bugni’s office at Federal Defender Services, was a gift from an outgoing intern, replacing a paper sign with a similar message that Bugni would put on his door when he needed solitude to prepare for a trial.


How did you decide to go into law?

When I realized I was not called to be a priest, I wanted to be able to serve people. One of my family members had been a victim of a violent crime. And I saw how well that the prosecutor’s office was able to serve my family. I thought that I could give people that same dignity, and I wanted to do that.

How did that lead to work for the indigent?

My first case when I was clerking was a guy named Thomas Mastrelli, and he was innocent. And I watched his trial and saw the way the accused were treated. And I thought, this is what I could dedicate my life to. And so it was a slow process after Tom Mastrelli’s trial, but I thought this is what I wanted to do to serve people.

Is it more challenging to defend the accused in federal court? Why?

I think the federal government has more resources to go after people and heftier penalties. It is more challenging. The judges are more prepared. The prosecutors are usually more prepared and, you know, they’re usually quite formidable.

What would you say has been your most challenging case?

It would be a United States v. (Samy) Hamzeh. It was a case out of Milwaukee where a client was entrapped after four or five months of the FBI having two informants working on him daily. We fought that case for six years. And we went up to appeal. It was a huge case. Number two would be State v. (Mark) Jensen. That’s the Gone Girl case. So I did the habeas appeal of that, the habeas case where we were able to overturn his conviction.

What was the most satisfying?

It was this case, Ronnie Wells, and my client was a savant. He had graduated last in high school, and during the course of representing him, I realized he was actually a genius. He had all this unlocked potential. So I was able to get him into MATC and then to college during the course of the representation. And he was sentenced, despite having three prior convictions for drugs, to probation. The judge came off the bench and shook his hand. He was so proud of the man that he had become. He’s now in the information technology field.

What’s the best part of the job?

The best part of the job is that I’m able to help someone at probably the lowest point of their life. And not just shepherd them through that lowest point and give them hope, but also I’m able to recognize and defend their dignity throughout that process.

Besides your job, what else do you like to do?

Play with my kids and be with my wife. That’s kind of my life. I love my family. I’m blessed with the greatest family anyone I could ever ask for. So anytime I’m not at work, I’m usually with them.