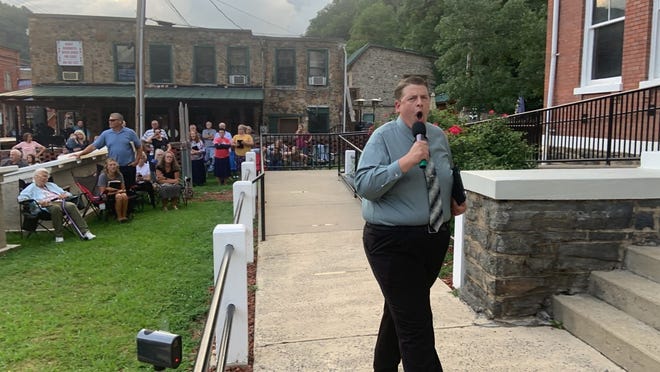 MARSHALL – A crowd of more than 100 people gathered on the Madison County courthouse lawn in Marshall July 13 to participate in an anti-abortion rally organized by local pastors.zatysw3

“The bottom line is … we are reclaiming Madison County for God almighty,” said Brian Coates, a pastor with Arrington Branch Baptist Church in Marshall.

“The Baptist Christians of Madison County are reclaiming this county,” Coates said.

According to Coates, the July 13 event was moved so that churches are able to move their Wednesday evening services to downtown Marshall

Opposite view:‘Bans off my body,’ ‘Abort the Court:’ Asheville rallies, furious at Roe v. Wade ruling

“Several had mentioned to me that it was hard to come up here at noon on a Thursday, because men work,” Coates said. “These men are working men, and they can’t come here on an afternoon on Thursday. So, we decided to do it on Wednesday nights so that area churches can gather here at the courthouse.”

Some residents questioned on The News-Record & Sentinel Facebook page how the event was allowed to take place on the courthouse grounds.

Coates said he worked with Clerk of Superior Court Mark Cody to establish a date, which Cody approved.

“I send him a date and he approves it yes or no,” Coates said. “We’re offering whatever we need to do make sure this place is just as clean when we leave as when we get here. This piece of property represents Madison County. We’re here to state what we believe in Madison County.”

Roughly halfway through the event, a resident pulled in front of the courthouse and blared on his/her car horn for more than two minutes, aiming to drown out Coates’ voice.

Around that same time, a cry of “My body, my choice” broke out from a number of residents gathered across the street from the North Main Street courthouse, many of whom carried signs expressing their support for abortion rights.

“I feel it’s necessary because I have a lot of friends – I’m in my late 20s, and this is a time where losing Roe v. Wade is a really big deal,” Hunter said. “It’s a really scary situation surrounding all of my female friends, and all of my nonbinary and trans friends who are scared of losing their rights in this state.

“But this is my town. I’ve lived here in this town, on this street, for three years. When I see that happening, it scares me, because people that are on the edge of making decisions against bodily autonomy, they start to scare my friends. I don’t have any room in here, but I will activate myself, and anyone else I can around me, to support my friends’ ability to make their own decisions.”

As Big Pharma Loses Interest in New Antibiotics, Infections Are Only Growing Stronger