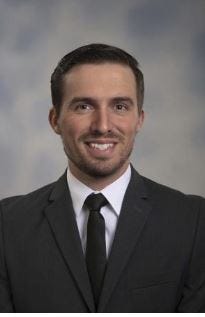 “I’ve learned a lot more about Winthrop in the past couple months than I even knew as a student,” Auman said. “I had always seen the Coliseum, which is incredible. But the university itself, the campus, the people there, it’s such a nice community and tight-knit group. You can tell they really care about the university.”

Before joining Columbus State, Auman was a coach at Combine Academy, a prep school in Matthews, during the 2016-17 school year. Auman spent the previous two seasons as an assistant coach at USCAA DII member Johnson & Wales University in Charlotte on the first varsity women’s basketball program in campus history.

Auman began his collegiate coaching career as an assistant at Elms College in Chicopee, Massachusetts. During his tenure, the Blazers won consecutive NECC regular season championships and made appearances in the NCAA Division III and ECAC regional tournaments.

Auman, a 2011 graduate of UNC Asheville, said he is looking forward to returning to the conference where his journey began, as his first coaching gig was as a graduate coach with the Bulldogs.

“I’ve really enjoyed my time so far,” Auman said. “It’s a blessing to be back in the Big South. I’ve been a huge fan ever since I started school. It’s a very competitive league, and Winthrop has always been atop that, especially on the men’s side. The women’s basketball program was also there in 2014. Really, we’re looking to get it back to that peak.”

The Winthrop men’s basketball program has made 11 NCAA tournament appearances, including most recently in 2021.

“Our guys are there consistently. They set the tone, so we’re looking to feed off that energy and bring that back to the women’s side,” Auman said.

Auman played two years under former Madison High coach Bill Burrows. He said he has known that coaching was his destiny since his playing career ended at UNC Asheville.

“I tried out at UNC Asheville as a player, and I just wasn’t good enough,” Auman said. “I played all knew through high school, and once I playing was out, I was like, ‘I need to be around this game.’ I love the game of basketball.”

Auman and his wife Stephenie Auman live in Denver, NC

For now, the 2007 Madison grad said he feels gratification in representing his hometown wherever he goes in his coaching career.

“I’m happy that I can represent Madison County and Marshall, and continue to do so where I go,” Auman said. “I’m happy that I still have family back there who are still active in the community. My dad is always telling me things that he’s doing out that way. It’s nice to still have that connection.”

KHN’s ‘What the Health?’: Voters Will Get Their Say on Multiple Health Issues