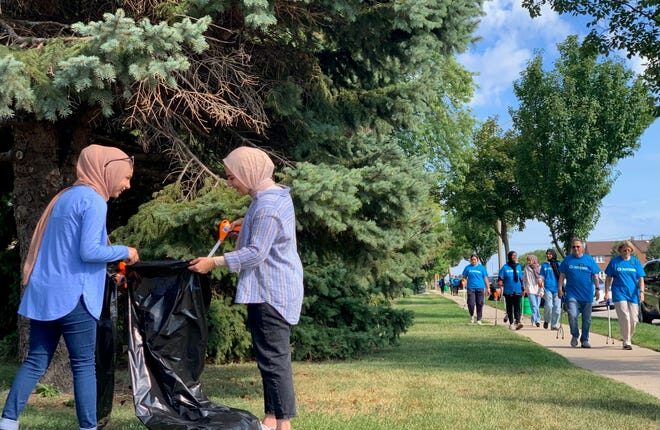 At 9 am on a sunny Saturday morning in Milwaukee, two prayers went up.

One was led by Zulfiqar Ali Shah, imam at the Islamic Society of Milwaukee.

The other was led by Chris Nussbaum, president of the Milwaukee North Stake of the Church of Jesus Christ of Latter-day Saints.

The two faith leaders had a singular message: gratitude for the opportunity to give back to their community.

They were among nearly 200 people of both faiths — from college students to elderly men to parents pushing babies in strollers — gathered in the parking lot of the largest mosque in the state for the second annual Interfaith Neighborhood Clean-up.

For two hours on Saturday, members of the two religious organizations spread out across the neighborhoods near South 13th Street and Layton Avenue and along Interstate 94, picking up cigarette butts, candy wrappers and water bottles.

Othman Atta, director of the Islamic Society of Milwaukee, said the idea was born at Aurora St. Luke’s Medical Center, where his daughter, a nurse, works alongside Nussbaum, an emergency medicine doctor. The two began talking about how their religious communities should collaborate.

Atta’s daughter put the two faith leaders in touch, and soon they got the nonprofit Keep Greater Milwaukee Beautiful involved.

Both faith communities are quite large. The Muslim community in Milwaukee is estimated at 10,000 to 15,000 people, while the Church of Jesus Christ of Latter-day Saints counts about 5,000 members split across two Milwaukee stakes, according to Nussbaum.

This marks the first time the two religious organizations have worked together. The Mormon church, which organized the first interfaith cleanup last year, worked with the Episcopal Church and the Ahmadiyya Muslim community and focused on cleaning up northwest Milwaukee.

This year, Atta said the Islamic Society suggested cleaning up the area around the mosque, a diverse neighborhood close to the airport where many longtime homeowners live alongside immigrants and refugees, especially Rohingya, a Muslim ethnic minority who have faced decades of repression in Myanmar.

The organizations also chose to do the cleanup around the National Day of Service, an annual community service event in remembrance of 9/11.

“A lot of the Muslim community, during the time of 9/11, can feel secluded or stereotyped or like they have to be extra careful about what they do or say,” said Lena Abukhamireh, a recent Marquette University graduate. That makes it particularly meaningful that LDS and Muslim communities are showing up hand in hand to “shed positive light,” she said.

Although the cleanup is the first collaboration between the Islamic Society of Milwaukee and the LDS church, some of their members have already been longtime friends.

Walking beside clotheslines hung with sarongs and houses flying American flags, Sheri Bohl and Muna Mousa filled up their second bucket of the day and told the story of how they became friends.

Lasting friendships can be formed

When Mousa, who is Muslim, first moved to the area nine years ago, she said she was slightly nervous about how her neighbors would treat her.

But she said she instantly clicked with next door neighbor Bohl, who is LDS. Now, they spend hours at each other’s homes eating sweets and talking about similarities in their faiths.

“She is so nice. She has a big heart. And she looks exactly like me,” Mousa joked. “Not on the outside, but on the inside.”

When Bohl found out that the LDS and the Islamic Society were holding a joint event, she said she told Mousa, “We can do this together!”

Mousa had only one question: “You want me to wake up early?” she said with a laugh.