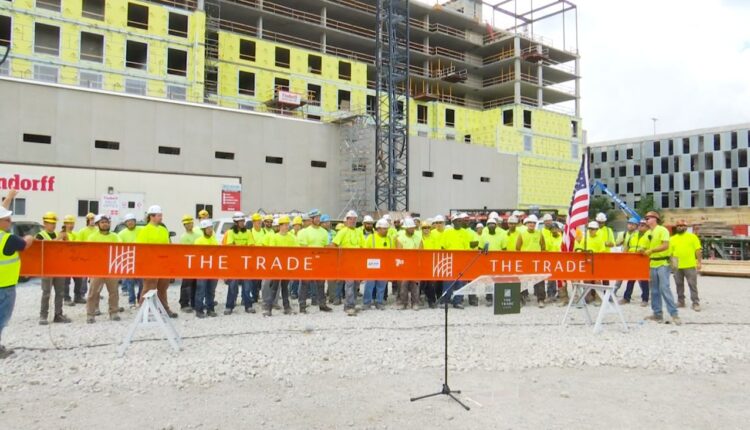 MILWAUKEE — A new hotel that’s under construction in the Deer District aims to be a big draw for the City of Milwaukee.

Peggy Williams-Smith watched as an orange beam went on the top of The Trade Hotel during Wednesday’s topping ceremony.

“It’s been a long time since we’ve seen hospitality development in this city with COVID, so this was really exciting to see,” said Williams-Smith, the president and CEO of Visit Milwaukee.

Williams-Smith joined several others on a tour of the future hotel, which hosted more than 200 rooms. The Trade Hotel is expected to open in early 2023.

The hotel is focused on highlighting Milwaukee, which Williams-Smith said she believes will go a long way.

The Trade Hotel showcases local products in its guest rooms, in an attempt to tell the story of the city.

“I don’t think they have skipped a beat in what this hotel is going to be in this market,” said Williams-Smith.

She said hotel guests will have access to explore the heart of the “beautiful” city.

The Trade Hotel is among a list of new developments that have come to the Deer District within the last few years.

Peter Feigin, president of the Milwaukee Bucks, said this hotel is just another part of redefining downtown.

“I mean, whether we are inviting visiting NBA teams, MLB teams or visiting tourist or business travelers, this is what we need to continue to do in the city of Milwaukee to really create a destination,” said Feign. “The Trade has helped us further our goal of creating the destination where we can live, work and play in downtown Milwaukee.”

Williams-Smith said she feels the hotel could also be a big part of attracting more conventions to the city.

“I think if the past two and a half years have taught us [anything], with COVID, it’s that hospitality is incredibly important to the success of the city,” she said. “What I like to say [about] tourism, is that sometimes it is the first time that a person sees our city — which could lead them to falling in love with our city and then having them move to our city.”