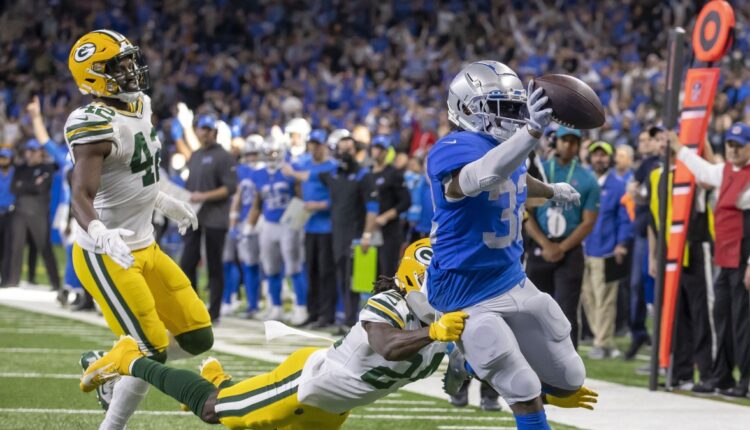 GREEN BAY, Wis. – The Green Bay Packers have been bad. The Detroit Lions have been worse.

The Packers lost four in a row headed into Sunday’s NFC North matchups at Ford Field. The Lions have lost five in a row.

The Packers’ defense has been a tremendous disappointment. The Lions’ defense is the worst in the NFL by points allowed and yards allowed. Of the main statistical categories, Detroit’s best is passing yards, where it’s 27th because opponents don’t have to throw the ball in the fourth quarter.

The Packers didn’t add anyone at the trade deadline. The Lions traded away their standout tight end.

Green Bay is a 3.5-point favorite to get back on track. Nonetheless, even against the worst team in the NFL, there are reasons to worry. Here are three.

The Lions are the new Greatest Show on Turf. Well, home turf. In their four games at Ford Field, they’ve scored an NFL-high 143 points. The Cleveland Browns are next with 134 points but in five home games. Detroit’s 35.8 points per game at home is more than a touchdown better than the Philadelphia Eagles’ second-ranked 28.5.

And it’s not like they’ve beaten up on the equivalent of some FCS schools. In Week 1, Detroit lost 38-35 against the Eagles, who are the only undefeated team in the NFL and have given up 17 or fewer points in six of their other seven games. They scored 36 in a victory over the Washington Commanders, who held the Packers’ offense to just 14. They lost 48-45 to the Seattle Seahawks, who have given up a total of 45 points the last three games. And, last week, they lost 31-27 to the Miami Dolphins; all 27 points came in the first half.

Staying at home, the Lions are first in touchdown passes, second in passing yards per game and third in passer rating. Led by D’Andre Swift’s 8.2-yard average, their 6.2 yards per carry is almost a full yard better than any other team. They lead the league in 25-yard plays (16) and 40-yard plays (eight).

Yes, the Lions’ defense is as bad as their offense is unstoppable. But this is a group with the potential to blow the Packers right out of the stadium.

“They’ve got good skill position guys,” cornerback Rasul Douglas said. “Jamaal (Williams) and Swift are playing great right now. And there’s something about them when they play at home, they just get it going. So, we have to go in there and try to get some stops early. We’ve just got to make sure we’re all on the same page so we can just play our jobs. They definitely make a lot of big plays. We’ve just got to be in the right spots, communicate.”

With D’Andre Swift and Jamaal Williams, the Lions have a tremendous one-two rushing attack that rivals Green Bay’s dynamic duo of Aaron Jones and AJ Dillon.

Led by a powerful offensive line that features former first-round picks Penei Sewell, Frank Ragnow and Taylor Decker, Swift and Williams have been the driving forces behind an offense that, regardless of location, ranks ninth in scoring, third in total offense, fourth in yards per carry and seventh in yards per pass attempt.

Swift is averaging a ridiculous 7.4 yards per carry, tops in the league. Williams is second with eight rushing touchdowns. The Lions have topped 100 rushing yards in six of seven games, including four games with at least 139.

Joe Barry’s run defense has been like a pinata. It holds firm for a while but, whack it enough, and the candy spills out.

“The Commanders game, for example, I think they had 38 minutes; I think 32 of them, we played dominant,” Barry said. “We had a breakdown here or there at different spots on six plays where they turned six runs into 70 yards. Same thing in the jet game. They had 33 runs. Shoot, 28 of them, we played really, really well. We knocked the run out. But the other four or five, we missed a tackle here, we gave up the edge here, whatever it may be. Bottom line, there’s always been one or two little things here or there that’s affected it.”

Which Weakness Is Weaker?

Call this the opposite of the unstoppable force paradox. Detroit’s defense is the stick of butter to every lukewarm knife. Green Bay’s offense is the plastic knife to every block of granite.

The Lions are on pace to allow 546 points. That would be the most in NFL history. Remember all those points they’ve scored at home? They’re still only 1-3 at Ford Field.

Detroit ranks 32nd in the NFL with 8.07 yards allowed per passing attempt (worst by 0.38 yards) and opponent passer rating (108.5). Not so long ago, you’d penciled in Aaron Rodgers for 400 yards and four touchdowns as the Packers would hang half-a-hundred. Not anymore. Green Bay, which ranks 26th in scoring overall, has managed just 14.8 points per game on the road. Rodgers is 25th with 6.3 yards per passing attempt.

Savage has issues to tackle

O’Donnell under pressure at punter; here’s why

Are injuries really a problem for the Packers?

Here’s why Aaron Rodgers has a healthy outlook

How to Watch/Listen/Stream/Bet Packers vs Lions

What channel is the Packers-Lions game on?

Journalists Cut Through the Noise, From Open Enrollment to Magic Mushrooms