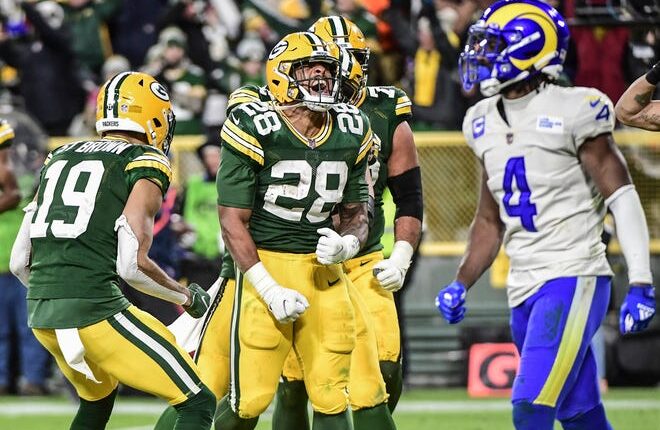 Elvis has left the building and maybe this mortal coil.

The Kenosha Kingfish mascot (that’s Elvis) went toe-to-toe with Packers running back AJ Dillon, he with the massive quads and thundering NFL carries, as part of a celebrity softball extravaganza Saturday in Kenosha. It went quite badly, for the mascot.

It appears Elvis was going head-to-head in an “Oklahoma drill” variation, with the goal of bringing the opponent to the turf in a 1-on-1 situation. Both began from a seated position facing away from each other. They got to their feet, and Dillon promptly eviscerated the poor mascot, with his foam head flying off in the process.

The eye-opening moment came during the Kenosha Kingfish celebrity softball game, featuring a number of current and former Packers players like Ahman Green, Jordan Love, Dorsey Levens, Gilbert Brown, George Teague and Jordan Love. Jerseys from the event will be donated to the Boys and Girls Club of Kenosha.

The Kingfish are part of the Northwoods League, a wooden-bat summer baseball circuit featuring college players.

Dillon has had a high-profile offseason, including his wedding, European honeymoon and various other excursions around Wisconsin (mostly Door County).

Tariq Carpenter was a steal for Green Bay’s defense