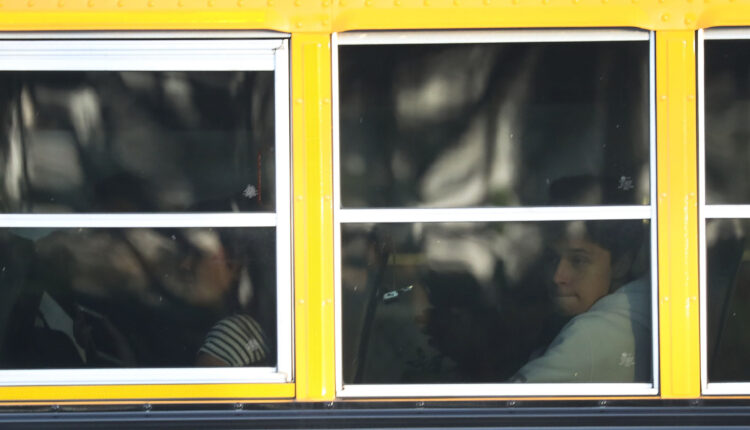 When a school board in Lake Country, Wisconsin approved a policy banning the display of LGBTQ Pride flags and the use of preferred pronouns, it found itself on the leading edge of  a series of similar policies enacted in school districts elsewhere in the state and across the country.

On July 26, 2022, Kettle Moraine School District’s school board approved an interpretation of Section 522 in the Employee Professional Code of Conduct applying it to pride flags and the use of preferred pronouns in email signatures: “All employees of the District are expected to maintain high standards in their school relationships including … Restraint from using their position to promote partisan politics, sectarian religious views, or selfish propaganda of any kind, or for personal, monetary or non-monetary gain.”

This decision was similar to a letter sent on August 20, 2021 by school officials in nearby Waukesha School District requesting that teachers not display anything in the classroom that might be seen as “controversial” or “divisive”. The following December, a teacher in the district was suspended for displaying a Pride flag in her classroom.

Between early August and mid-September schools in Texas, Kansas, and Pennsylvania also enacted policies restricting the use, by students and teachers, of pronouns that do not match an individual’s gender assigned at birth.

In Hartland, Wisconsin, the Arrowhead School Board voted on September 14, 2022 to adopt Policy 651 (Student Name and Pronouns) stipulating, among other things, that “staff shall not refer to or address minor students by a different name(s) or pronoun(s) that differ from their biological sex during school hours, without written authorization from a parent.”

The practice of asking for someone’s preferred name and pronoun, often called gender affirmation, is common in both educational and business contexts.

Policies that prevent teachers from honoring how students wish to be addressed make long days at school hard for students to endure. In some cases,  exceptions have been made based on a student securing parental permission. This presents LGBTQ students with difficult, if not impossible, options: Either suppress your gender identity or submit to the administrative requirement for permission and “come out” to your parents. For a child who does not come from an accepting family, this can be incredibly traumatic.

This is one reason why so many people have been motivated to attend board meetings in districts that have proposed or approved policies that prohibit gender affirmation practices. At the meeting that followed the one where Kettle Moraine’s school board instituted the district’s  ban, demonstrators filled the library where the meeting was held.  When Arrowhead brought Policy 651 up for a vote, more than 20 students, parents, teachers and community members spoke out against it. A petition was also circulated, gathering over 180 signatures of people who opposed the policy. Only six individuals spoke in favor of the policy.

With so much opposition to these policies, and so little public support for them, why are they proliferating?

In part the bans follow a reactionary trend of conservative groups and the Republican Party pushing back on progressive legislation such as The Equality Act and efforts going back to 2010 to ensure Title IX protections are extended to LGBTQ students. Human Rights Watch reported a record number of anti-transgender bills introduced and/or passed across the country in 2022.

Promoting anti-transgender policies has also been seen as a way of activating conservative voters in low-turnout elections. Wisconsin Assembly Representative Barbara Ditttrich (R-Oconomowoc) introduced legislation (AB195 & AB196) to restrict student athletes to competition “based on the sex of the participants” just in time for the school board elections in Spring of 2021. Standing alongside her during a press event for those bills was a candidate for the school board in the Oconomowoc Area School District. On April 6, in what is historically a low-turnout election cycle, conservative voters were mobilized and he, along with other GOP-backed candidates, won their races.

By early 2022, anti-LGBTQ policies were subsumed, along other topics including so-called  critical race theory, into the phrase “Parents Rights in Education”. In Wisconsin, this new theme combined well with campaign tactics used the previous spring to deliver school boards that were more partisan, and more focused on “culture wars,” than ever before. The notionally non-partisan school board elections on April 5 brought a wave of partisan-controlled school boards across Waukesha County.

In early April the “Parent Bill of Rights” put forward by the Republican party faced a certain veto by Democratic Gov.  Tony Evers. The school board elections provided the GOP with a chance that these bills could find life in partisan-controlled school districts. One of those rights, “the right to determine the names and pronouns used for the child while at school,” became the basis for the policies governing student names and pronouns.

While the decisions on pronouns and Pride flags in Waukesha and Kettle Moraine school districts relied on interpretations of existing policy, there was, at the time, no policy designed explicitly to regulate those things directly. In June, the conservative Wisconsin Institute for Law and Liberty (WILL) released a suite of “model policies” for school boards with the goal of “increasing parents’ rights and involvement, creating transparency, optimizing student academic achievement and improving school governance.”

Meanwhile, behind the scenes, Arrowhead’s partisan-backed school board was seeking to replicate Kettle Moraine’s policy. An open records request produced the following email, sent on July 30, 2022, four days after Kettle Moraine passed its ban, in which Arrowhead school board member Chris Farris reached out to obtain the policy in question: 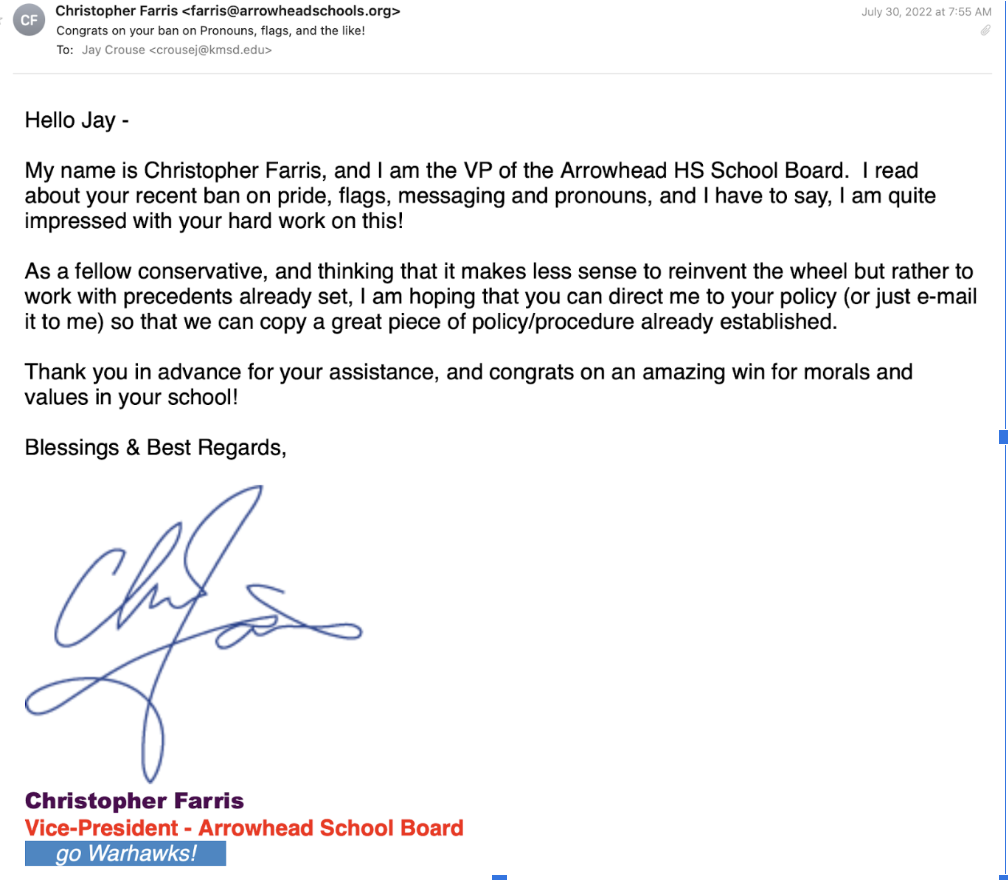 This was followed by another email on August 3rd from GOP-backed Arrowhead Board President, Kim Schubert, to another partisan-supported board member at Kettle Moraine making a similar request: 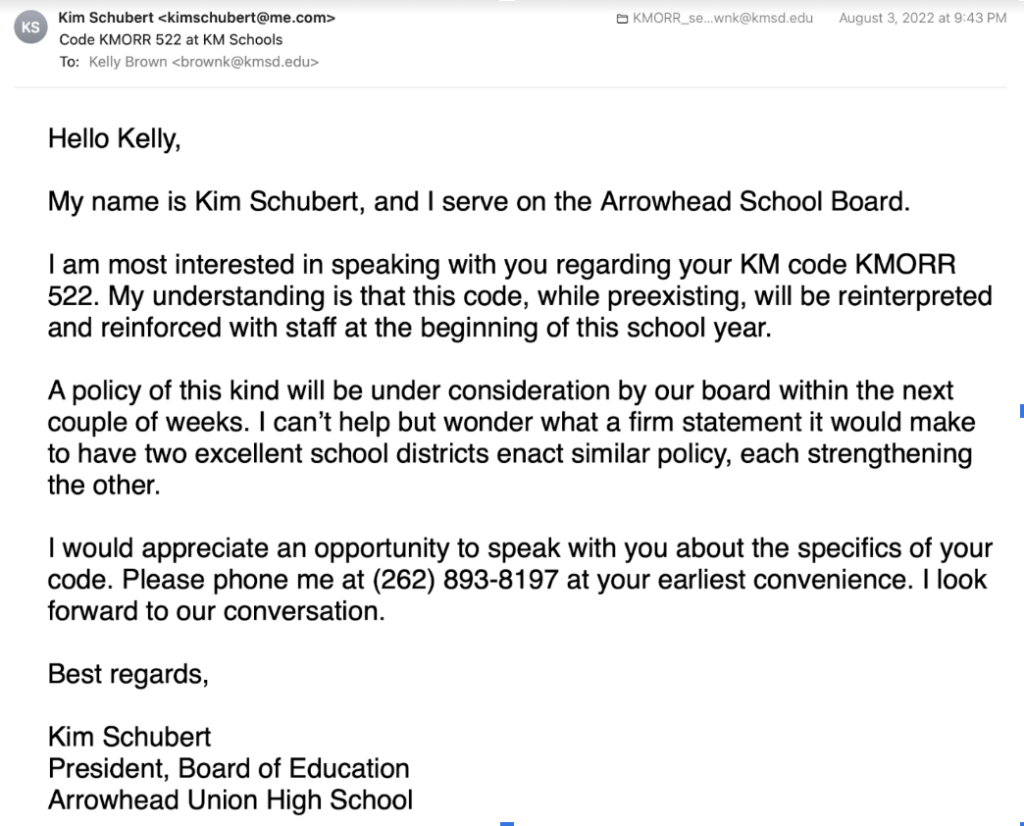 Public records show there was at least one other inquiry to learn more about Kettle Moraine’s policy, in this case by an educator in Kansas.

Another sign of coordination: one of WILL’s pre-drafted policies on “Student Gender Identity” was used, almost word for word, to create concept Policy 651 (Student Pronoun Use Authorization) which was introduced to Arrowhead’s Policy Committee on Aug. 15.

After sending the policy to legal counsel for review, including an attorney who used to work with WILL, the board took up a revised policy Sept.14 and approved it  8-1, over the opposition of the community.

It’s likely that other provisions in the GOP’s “Parent Bill of Rights” will serve as inspiration for new policies in partisan-backed school districts in the coming months. One conservative member of Arrowhead’s school board already publicly expressed interest in banning Pride flags in the near future. It’s also likely that these policies will continue to receive strong opposition from the community. Since school board elections are typically low-turnout affairs, a base of voters motivated by these policies will make all the difference in 2023.