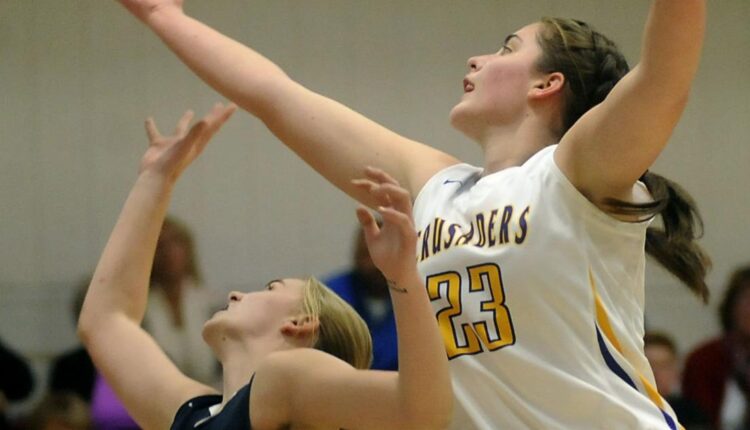 Editor’s note: This is the ninth in a series of stories previewing Racine County girls basketball teams.

RACINE — It was a reasonable assumption to make last year at this time that the Racine Lutheran High School girls basketball team would hit a speed bump.

Caroline Strande and Morgann Gardner, both NCAA Division I recruits, had graduated in consecutive seasons — Strande in 2020 and Gardner in 2021. Surely, the Crusaders wouldn’t be able maintain a run that saw them go 94-24 from 2016-21 without at least one of those standouts.

And then, improbably, the Crusaders went on to make a deeper run in the postseason than they ever did with Strande or Gardner.

Entering the WIAA Division 4 regions with a 13-11 record, Lutheran stunned Kenosha St. Joseph and the Milwaukee Academy of Science. Then the Crusaders pulled of a 56-51 upset of Prairie, which had won 16 straight, in a sectional semifinal before losing to eventual Division 4 runner-up Laconia 47-45.

Can the Crusaders continue this success? With four returning starters — Salma Ibarra, Julia Kellner, Sarah Strande and Ellie Jaramillo — why not?

“I think we’re going to continue to win because we still have that team mentality within us,” Jaramillo said. “We all have a competitive drive to win and we all know how far we want to get.

For the third straight season, coach Steve Shaffer will have to replace his leading scorer. Nevaiah Bell-Tenner, who averaged 14.3 points, 8.1 rebounds, 4.6 assists and 2.8 steals, has graduated and is now playing for Culver-Stockton in Canton, Mo.

There may no longer be a focal point the likes of Caroline Strande, Gardner or Bell-Tenner. As coach Steve Shaffer said, “It’s more than just one player and it’s more than one player with talent. It’s all of us together. Everyone in our program brings something to the table that makes our team better.”

It sure helps with four established returning starters.

Sarah Strande averaged 11.3 points, 4.3 rebounds, 2.9 assists and 2.1 steals last season. She is being moved this season to point guard, where her All-State sister flourished for four seasons.

“She’s going to take over the point guard spot for Nevaiah and being more of a scorer as well as a distributor,” Shaffer said. “She’ll get us going and make the decisions on the floor as a leader. It take her while to adapt, but I have all the confidence in the world that she’ll might do a nice job with that.”

Lutheran’s only other senior, Jaramillo, averaged 11.9 points per game and will join Strande as a team leader.

“She brings a lot of experience to the table,” Shaffer said. “She can shoot from the outside, she’s developing a drive … I see her game increasing every single year. With her having played a lot of minutes, that’s going to be crucial to us.”

Ibarra made a quick progression as a sophomore last season after not playing on the varsity as a freshman. She is already established as a defensive stopper.

“She’s that player we can put on the other team’s best player and she’s going to do a nice job of slowing her down, at least,” Shaffer said.

And then there’s the 6-foot-2 waiter, who was one of the best post players in the Metro Classic Conference last season as a freshman. Kellner averaged 8.6 points, 13.1 rebounds and 1.4 blocks.

“Julia is very good defensively and a great rebounder,” Shaffer said. “You can depend on her for double digits (with rebounding every night). She’s also learning to use her left hand around the basket and, once she does that, she’ll be a much more effective offensive player.”

Add it up and it appears this program will continue to continue rolling.

“It’s not really one player anymore,” Ibarra said. “It’s the team being very supportive with each other. Lutheran basketball can accomplish many things as long as we keep playing our game.

“Yeah, we lose people, but there’s still people who are here and ready for the new season.”