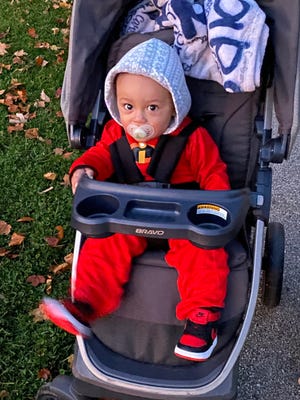 Linda Scott drove to Milwaukee from Racine so that her son, Carson Lay, could enjoy his first ever trick-or-treat with his family.

The normally joyous occasion quickly took a turn for the worst when Scott, 22, and her 11-month-old baby boy were hit by a reckless driver, who then fled the scene.

The incident happened near Humboldt Park in Milwaukee around 6:30 pm Saturday. The Bay View neighborhood had trick-or-treat until 8 pm Saturday. Scott was meeting with her family at the park before heading off into the neighborhood.

The Milwaukee County Sheriff’s Office says a driver in a black sport utility vehicle, possibly a Tahoe, drove through a stop sign on Park Road before crashing into another vehicle and hitting four people, including a 40-year-old woman and 37-year- old man

Scott and baby Carson, who was in his stroller at the time, were hit head on.

“I was walking with my child in the stroller, as I’m walking more towards my sister’s car the vehicle came speeding around striking the side of my sister’s car, like scraping it, then came head on into me,” Scott said.

Both were transported to the hospital with injuries. Scott believes she took most of the force, but Carson needed to get stitches in his chin. As of Monday, both Carson and his mother had been released from the hospital.

Scott said a woman who announced herself as a nurse rendered aid to her and her baby prior to the arrival of paramedics.

Humboldt Park Friends, a nonprofit focused on engaging the Bay View neighborhood with the park, will meet for a general meeting at 7 pm Thursday at the park pavilion where the group plans to talk about how to slow traffic.

Scott says she is shaken up but grateful her son is OK.

“Slow down and please pay attention, younger lives do depend on it,” she said.