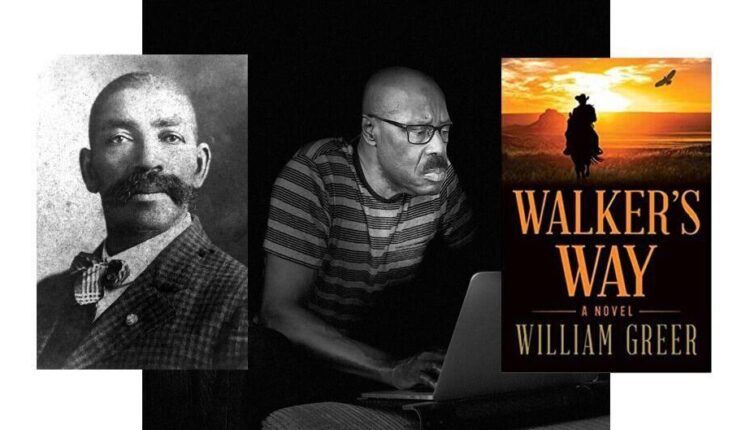 RACINE — William Greer’s first published book started as a gift for his son on the occasion of his 40th birthday.

The Racine native, who now lives in Madison, said it was a struggle to come up with a gift that expressed a father’s love for his son, something more than a card, something he could put time and effort into.

“I wanted a gift that would tell him how much he really meant to me,” Greer said.

So he wrote a short story, a western with a black cowboy in the lead.

“He was very moved by that,” Greer said. “He said ‘Keep them coming. If this is something you enjoy doing, I enjoy reading them.’”

After a while, Greer began to share the short stories with friends and relatives, who encouraged him to turn them into a book, which he did.


“Walker’s Way,” by William Greer, is a historical novel that intersects with the western genre.

Greer published his first book — “Walker’s Way” — featuring the Black cowboy he first created as a gift for his son.

“I’ve always had a knack for writing, for putting things down on paper,” Greer said. “I had long desired to write a book, but I didn’t have time to do that until after retirement in 2016.”

With the publication of his book in 2020, he was able to cross one thing off his bucket list.

Now 75 years old, and considering a second book, Greer looks back to his childhood in Racine in the ’50s and ’60s where he spent a lot of Saturday afternoons watching westerns with his mom.

“I knew a lot about westerns from the point of view of a fan and a reader,” Greer said. “What I did not know about was the role that African Americans played in the western saga because in all of the material that I was viewing and reading, there was little mention of Black men and women.”

He began to research and learned Black people played a significant role in the Civil War, and later migration to and settlement of the West, stories that were often ignored by Hollywood.

“That was a story to me that seemed largely untold,” he said. “I wanted to flesh that out for folks, so I created a character that allowed me to do that.”

The character was Joe Walker, a former enslaved person who escaped the South and fought for the Union in the Civil War and then went on to help settle the west. The story is nuanced and includes the struggle of Black men and women who were “suddenly emancipated with no clue what they were supposed to do now that they were free.”

Greer said he did quite a bit of research for the novel. While it is a western, it could also be considered historical fiction.

“I explored what that must have been like for people who had been a part of this nation from almost its inception, but who had not been given the independence and the agency to conduct their own lives,” Greer added.

He had to learn some things about history that were not taught in school, especially in the ’50s and ’60s: the role of Black men and women in the Civil War and the Buffalo Soldiers, who were products of the war and helped settle the west.

Greer learned about Bass Reeves, “who was a renowned law enforcement officer in the mid- and late 19th century, the first Black man to put on a badge and cover territory west of the Mississippi.”

He also learned about Nat Love, who was a famous cowboy of the era, renowned for his skill in horsemanship, and James Beckwourth, a famous mountainman.

“Joe Walker has bits of all these actual men in him,” Greer said. “His audacity and his journey reflects their real stories.”

Greer explained, “I wanted young Black men and women, young Black kids, to get a sense of the fact that we played an important role in what is now called ‘the taming of the west.'”

“The folks who tell the story are the people who shape what history is,” he said. “So it’s very important that people of color be the storytellers, as well as others.”


He remembers with appreciation his Horlick High School English teacher, Janet Fishbain, who was the person who encouraged him to keep writing.

While she has since passed away, Greer names her in the acknowledgments of his book and the fact he did what she encouraged him to do: to keep writing.

In addition to Fishbain, Greer credits the team he worked with at the Cadence Group, of Chicago, and Bethany Brown, executive director, especially for helping to move the process forward.

“She gave me the validation and motivation to move forward with it,” he said.

Brown saw the book as something with wide audience appeal, something beyond the western genre.

As for the long process of getting his work from manuscript to a published book, Greer described himself “as a babe in the woods.”

He was introduced to his editor, Katherine Don, who collaborated on the project. She helped him take what he had written and develop it.

Greer said hearing the company liked his book was “both a blessing and a curse.”

“The blessing is, they like the concept,” he said. “The course is now you’re going to have to do the refining work.”

The process took about three years; though, as a retiree, Greer did not necessarily work long days on the editing.

He is still writing and says, “I think I have another book or two in me.”