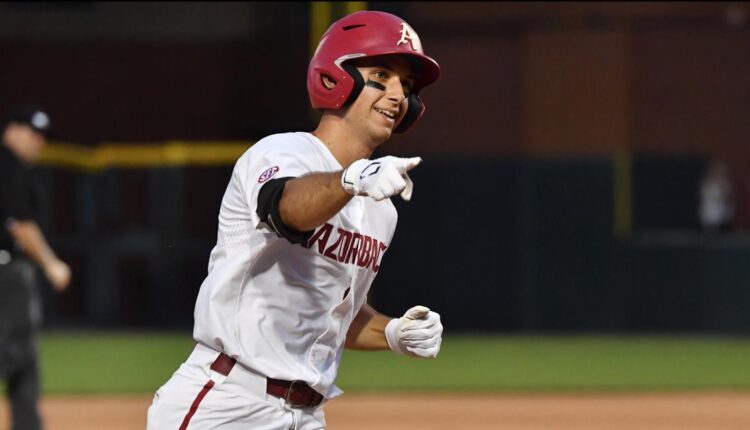 Milwaukee selected the Razorback infielder with the 72nd overall pick of the draft.

FAYETTEVILLE, Ark. — Robert Moore became the third Razorback off the board at the MLB Draft.

The Milwaukee Brewers selected Moore in the Competitive Balance-B round with the 72nd overall pick in the draft.

With the 72nd overall pick, the @Brewers select @Razorbacks_BSB second baseman Robert Moore, No. 108 on the Top 250 Draft Prospects list.

Despite playing as a second baseman at Arkansas, Moore was designated as a shortstop when the pick was announced.

Moore becomes the third Arkansas player picked in the first day of the draft, after Cayden Wallace went to the Royals and Peyton Pallette was picked by the White Sox.

Moore helped lead the Razorbacks to Omaha in 2022 with his stellar defense at second base, becoming the first Hog ever to win a collegiate Gold Glove.

At the plate, Moore hit .232 this past season with eight home runs and 44 RBI.

The second baseman’s big year at Arkansas came in 2021, when he earned first team All-SEC honors after .283 with 16 home runs and 53 RBI.

Moore was rated as the No. 108 prospect in the draft according to MLB.com. Here’s part of their scouting report on the Razorback infielder:

“A switch-hitter listed at 5-foot-9 and 170 pounds, Moore derives power from his bat speed and aggressive approach at the plate — though almost all of his pop comes from the left side. While he looks to drive the ball , he doesn’t chase pitches or swing and miss excessively.He draws a healthy amount of walks and plays quicker than his fringy speed on the bases.

The son of Royals president of baseball operations Dayton Moore, he’s a quality defender at second base with quick hands and an outstanding internal clock. Though he has fringy arm strength, some scouts believe his instincts would allow him to get the job done at shortstop, but he didn’t get the chance to do so at Arkansas after Jalen Battles returned for his senior season. With his relentless hustle and feel for the game, Moore comes with a high floor. “