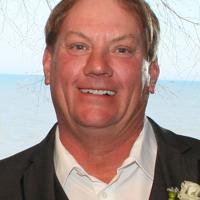 Ron was born in Racine on March 19, 1963, to Richard and Rosemarie (nee: Anderson) Christensen. He was a lifelong Racine resident and remained active in the community. Ron reconnected with the love of his life Nancy Daams and on March 20, 2021, they were united in marriage. Last year he built their forever home in a short four months which was a month too long for his liking! This was accomplished with the help of many friends and especially his sidekick Byron. Ron was a hard worker and always right there to help others, whether just to meet for breakfast at Sausage Kitchen, lend his equipment to a friend, squeeze in a concrete job for family, or share his business knowledge with others. Ron was a member of the Harbor Lite Yacht Club, where he enjoyed playing “cardboard crack” with his boating friends, participating in the cardboard boat races and even winning the sauerkraut eating competition at the yacht club’s German Fest event. You always knew when Ron entered the room because of his bigger-than-life personality. Ron never missed the Saint Patrick’s Day parade and always joked that the parade was “his” parade, because it was always on his birthday weekend. Ron is also very patriotic and always attended the Fourth of July Parade. He had a sensitive heart and teared up when the military floats went by. He most looked forward to challenging the Horlick High School football team to a pushup match. He never missed a photo op and gave his phone to his wife to capture all of these memorable moments. Those who knew him well, often saw him with a phone on each ear and commonly heard him say “wait a minute can I call you right back?” Anywhere he went in the community; downtown, Menards, Sausage Kitchen or in the Marina, it was difficult to get to his destination without seeing, talking or flagging down someone he knew. Ron’s zest for life was infectious to everyone he touched and his motto was “you can’t take it with you when you go!” Even in death, Ron is giving back through the donation of his organs.

A visitation for Ron will be held on Saturday, October 22, 2022, from 10:00 am until 1:00 pm at Purath- Strand Funeral Home. Private information will take place. In lieu of flowers, memorials to the family have been suggested.