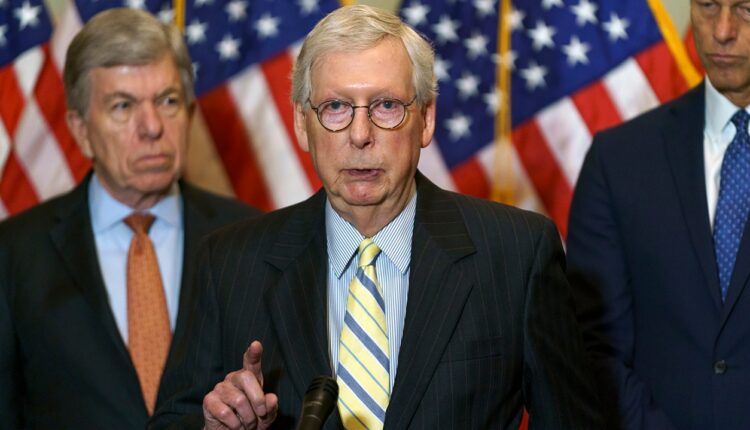 (The Hill) — The Senate advanced a bipartisan gun-safety bill past the threat of a filibuster Thursday, setting up a final vote for later in the day or Friday on the farthest-reaching gun legislation that Congress has considered in decades.

The bill, a response to mass shootings in Uvalde, Texas and Buffalo, NY, would enhance background checks for gun buyers younger than 21, provide money to administer red flag laws and crack down on straw purchasers.

Those voting to advance the bill included Senate Republican Leader Mitch McConnell (R-Ky.), who said he wanted to do something to respond to the shocking violence at the Robb Elementary School in Uvalde, where an 18-year-old gunman killed 19 children and two teachers.

It would close the so-called boyfriend loophole by barring people convicted of a misdemeanor domestic violence offenses from purchasing or owning firearms, though they could have their rights restored after a period of at least five years.

It would clarify the definition of gun dealers by requiring people who buy and sell a large number of guns for profit register as Federal Firearm Licensees, which means they would have to conduct background checks for those transactions.

McConnell praised the legislation as “a package of commonsense and popular solutions to make these horrific incidents less likely.”

The GOP leader argued “it does not so much as touch the rights of the overwhelming majority of American gun owners who are law-abiding citizens of sound mind.”

What states have concealed carry laws?

McConnell, who has an A-plus rating from the National Rifle Association, which opposes the bill, said Wednesday that he is more concerned about doing something to prevent future school massacres than losing his top rating from the gun-rights group.

“What I’m mainly concerned about is dealing with the issues that have been brought to the fore by these mass shootings which are directly related to school safety and mental health. And I think Sen. Cornyn and his team have put together a bill that addresses the problem,” he said, referring to Sen. John Cornyn (R-Texas), the lead GOP negotiator.

But a large majority of the Senate Republican conference voted against advancing the bill, voicing concerns over money to help states administer red flag laws or other intervention programs to keep guns out of the hands of people who are deemed dangerous to themselves or others.

Sen. Rick Scott (R-Fla.), who signed a state red flag law as Florida’s governor in 2018, announced Thursday morning that he would oppose the legislation because of what he sees as lack of guaranteed due process for people who are stripped of their firearms.

Scott argued that the Senate gun-safety bill has fewer due process protections than the Florida gun safety bill he supported four years ago.

“The bill the Senate is considering abandons Florida’s model and allows even the most radical policies, like California’s red flag law, to be implemented and supported with federal funding. Ironclad due process protections are essential to protecting the constitutional rights of Americans and we can NEVER compromise on that,” he said in a statement.

All Democrats voted to advance the legislation, which Senate Majority Leader Charles Schumer (DN.Y.) hailed as a major accomplishment.

“The bill can be described simply in three adjectives — commonsense, bipartisan, lifesaving. And if Republicans work with us, we could very well finish the job in its entirety before the day is done,” he said.

The vote to cut off debate sets up a vote on final passage of the bill later Thursday or sometime Friday.

Under Senate rules, senators can insist on up to 30 hours of post-cloture debate but Senate leadership aides said they hoped to get the bill wrapped up by Thursday afternoon.

Sixty-four senators, including 14 Republicans, voted to proceed to the legislation Tuesday evening.

Senate negotiators released the text of the legislation late Tuesday afternoon after weeks of private negotiations.

Sen. Chris Murphy (D-Conn.) convened a bipartisan group of senators in his Capitol basement hideaway two days after the shooting in Uvalde and that same week McConnell said he would appoint Cornyn, a senior member of the Judiciary Committee, to lead the negotiations for Republicans.

Cornyn said he rejected proposals by Democrats to significantly expand background checks for gun purchases, to ban assault-style rifles and high-capacity magazines, and mandatory safe-storage requirements for firearms at home.

The proposal has already gotten GOP pushback in the House, with both Minority Leader Kevin McCarthy (Calif.) and Minority Whip Steve Scalise (La.) coming out against it. Republicans plan to formally whip members against the legislation.

Speaker Nancy Pelosi (D-Calif.), however, has said she expects the House to vote on the measure this week, clearing the way for it to reach President Biden’s desk.

“This is an important piece of legislation. We’re very excited about it. It will save lives,” Pelosi said Wednesday. “But we want to get it done.”