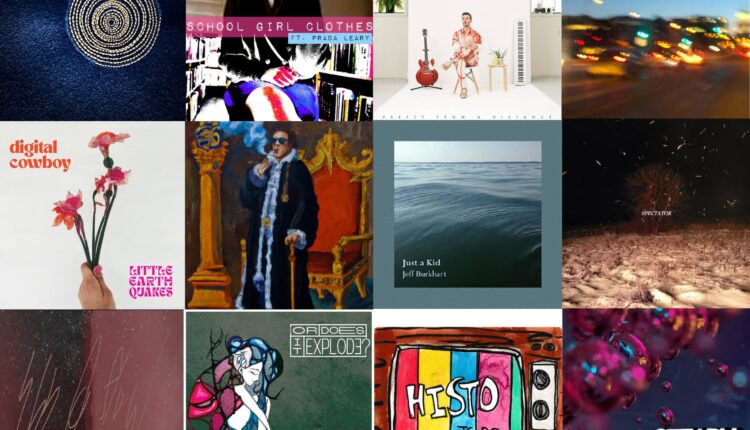 Photo: A 3×4 grid displays the cover art for the tracks that appear on this list.

The third installation of a three-part series chronicling our favorite tracks from local artists.

Kindness wasn’t always easy to come by in 2022, but when we needed comfort, Madison’s local musicians made sure we were covered. Across a three-part series, we will be featuring our favorite tracks from Madison artists, making sure to minimize overlap between our songs and albums selections. Madison’s music community is exponentially more varied than it often gets credit for, though its existing infrastructure needs major improvements to actually work towards meaningful equity.

Across around 36 selections, and split into three distinct parts, our picks reflect Madison’s depth. Emergent rap artists, veteran folk songwriters, experimental acts, punk projects, and more all find some amount of representation. Serenity, urgency, tragedy, and raucous fun are allowed to coexist comfortably here, while we reflect on what each track has to offer and how they impacted us as listeners. Some of these songs came from an album or EP, and some were released as standalone singles. All of them made an impact.

A few of this year’s selections were also included on the To Grow A Garden compilation. They were selected for both the compilation and these lists based on their strength and nothing else.

Music editor Steven Spoerl and Tone Madison publisher Scott Gordon handled the assembly of this year’s selections and writeups. From rap to folk, acoustic to electronic, and hardcore to slowcore, there is a range of material here that shows Madison’s musical strength isn’t due to one specific approach, but to a stylistic diversity that always keeps things interesting.

On the very last day of 2021, Air Cabin released one of the year’s best songs in “It’s Been Real,” and we’re recognizing it here as such. Fortunately, “It’s Been Real” wasn’t the only punchy, psych-dappled rocker that Air Cabin released over the past 12 months and change. “Steady Going Strong” stands tall as one of the project’s best songs, emphasizing mid-fi production and a deliberate insistence that’s all but guaranteed to get the song’s hooks stuck in more than a few people’s heads. —Steven Spoerl

Figuring out what a Cal Lamore (Hex House, Soot, etc.) solo record might sound like before its release is an exercise in futility. Lamore’s chameleon-esque approach frequently leads to different genres, but typically those genres are isolated and pronounced. “Meet Me At Mt. Hope Water Tower” is a sublime instance of all of Lamore’s favored genres coalescing into something profoundly, pointedly singular. Americana, post-rock, doom, grunge, indie-pop, and post-punk all seem to have equal representation on the opener from Lamore’s excellent recent album, Spectator, resulting in a breathtaking introductory moment that’s hard to shake. —Steven Spoerl

Several years ago, Nick Tovarek was playing at the Milwaukee-based Kane Place Record Club. Following a move to Austin, Tovarek has once again relocated and now resides in Madison. He makes up one half of Dream Attics, a long-running electro-pop duo, with Shane English. Their most recent single, “Ebb & Flow” is a glimmering triumph, evidencing years of chemistry and refinement, living up to its title. Verses on the track hurdle forward in staccato increments before the astonishingly sleek chorus sets flight. Masterfully constructed and tenderly delivered, “Ebb & Flow” demonstrates Dream Attics at their best. — Steven Spee

Histo’s recent full-length, JGDC, is the band’s most complete and most diverse record thus far, connecting on a multitude of stylistic swings. “Modern Soldiers” sets itself apart as the album’s most engrossing moment. Hazy psych-rock with ornate punk inflections washes over listeners on the track, lulling them into a state of calm even while the record’s most jagged impulses strike forward with complete abandon. A perfect closer to a superlative record, “Modern Soldiers” has more than a few moments that are so well-placed and well-presented that no one could be faulted for swiveling their head when they hit. —Steven Spoerl

One of the most promising bands to emerge from Madison’s depths in 2022 was punk trio Jonathon Millionaire, who immediately set to work bridging Midwest and “classic” emo with post-punk and indie-punk. Following a debut single and the album Unlimited Growth Potential (which has since been taken down), the trio released “Chrysalis,” a skybound single betraying grander scopes of ambition. Ostensibly a song about acceptance, “Chrysalis” revels in the comedown, alluding to various fuck-ups and hard moments with a wealth of empathy that provide the song with an abundance of warmth. Guitars swell and surge, stretching outward, surrounding pockets of restrained rhythm section work to create an effect as intoxicating as the substances depicted in the lyrics. — Steven Spoer

Carving out a distinct space as a folksy singer-songwriter can be a difficult task, considering the saturation point. Jeff Burkhart is one of the few Madison-based artists who’s achieved a comfortable, respected place in the city’s lineage of such acts. “Just A Kid,” the title track from Burkhart’s latest effort, is emblematic of Burkhart’s most winsome artistic elements. A palpable sense of both grit and sincerity works in tandem to create a naturally dusty sense of DIY attitude and execution. Flavorful acoustic licks, a rustic vocal delivery, and exquisite bass work congeal into a heartening whole, leaving Burkhart with a small triumph. —Steven Spoerl

“Digital Cowboy” is the debut track from Madison’s newest indie-adjacent quintet. Formed in part due to its members’ collective artistic restlessness during the 2020 Covid shutdowns, the band features several members who have been participating in Madison’s music scene for years. Both their combined pedigree and that thirst for artistry are clearly evident in “Digital Cowboy,” which packs in a number of ideas that more inexperienced bands might balk at, finding ways to make them work. A noir-ish lead guitar riff, electronic drum pad assists, disco licks, and suave synth lines all somehow sound perfectly in place. —Steven Spoerl

Few songs to come out of Madison—outside of Cribshitter, at least—have dared to be as outwardly explicit as “School Girl Clothes,” the latest single from the scrappy Andrea Gonzales-Paul-led punk project Mickey Sunshine. Detroit rapper Prada Leary descends on “School Girl Clothes” with bleary-eyed fervor, absolutely owning a feature that pushes the song to its eventual climax, which heightens Gonzales-Paul’s moans of “Oh. Yeah.” Apart from the unabashedly sex-forward lyrics, the song also boasts a genuinely catchy rhythm guitar pattern that dances its way through the track. Promiscuity is rarely granted this much power. —Steven Spoerl

…Or Does It Explode? go big with conceptual and sonic reaches on their debut album, Chrysalis. “Shattered Princess,” on the other hand, shows us what the post-hardcore band can do when it pares back, bringing welcome balance to an ambitious record. Delicate, clean-toned guitars, vocals full of weary compassion, and the concise punch of the chorus give this song just as much impact as the band’s lengthier and more grandiose statements. —Scott Gordon

Over the seven-plus minutes of “Cruel”, Pretty From A Distance holds its audience in a sultry thrall. “I hate that I have a feeling that I am / Destined to make my last call to a friend” is a brutally tragic couplet delivered with a graceful resignation that’s positioned snugly into the center of the track. As its electronic elements gently rumble around, a clean, reverb-heavy guitar line slinks over everything, which brings to mind feeble efforts to cover over feelings of impending dread with a blanket. Sometimes relief comes, and sometimes it doesn’t, but knowing we’re not alone in those struggles is a comfort in itself. — Steven Spee

Intone, the most recent full-length from Steve Meyer’s electronic Tables & Waves project, consists of occasionally bewildering, always enchanting tracks that sputter, synchronize, and breathe in mesmeric patterns. “Regroup,” Intone’s penultimate track, is the album’s most melancholic moment, as it deploys a gentle, calm quality that Intone rarely indulges, making its impact all the more powerful. Meyer—who has contributed technical support to Tone Madison on past occasions—is in full control on “Regroup,” allowing the track the space it needs to achieve full bloom. —Steven Spoerl

Ever-tinkering electronic musician Casey Bushmaker delivers a track title for the ages to accompany a new excursion into oddball funk. Wiggly synth leads, a couple of stately harpsichord breaks, and an array of skittering percussive textures keep this sample-based piece moving in unpredictable directions. There’s enough structure here to give the instrumental its share of well-defined hooks, all while leaving plenty of room for playful experiments. —Scott Gordon