U.S. House GOP outlines agenda in bid for control in the midterms 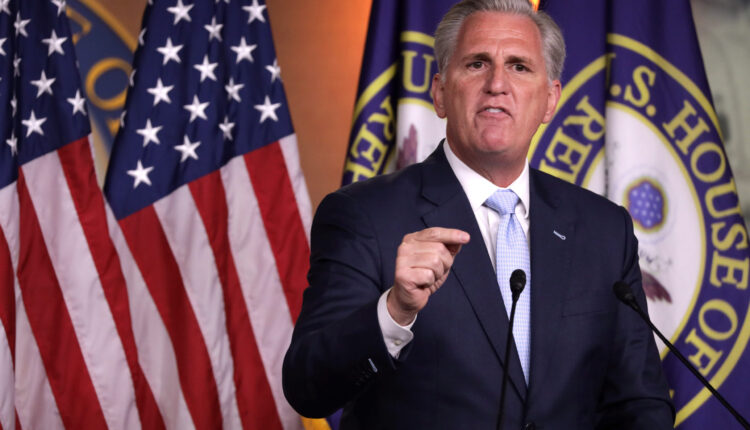 WASHINGTON — U.S. House Republicans gathered inside a warehouse in Southwestern Pennsylvania on Friday to outline the legislation they’d try to enact if voters give them back control of that chamber following the November midterm elections.

Speaking from an HVAC factory in Monongahela, about an hour south of Pittsburgh, House Republican leader Kevin McCarthy said the first bill he’d bring to the floor if elected speaker would repeal part of a Democratic law that boosted funding for the Internal Revenue Service.

“On that very first day that we’re sworn in, you’ll see that it all changes, because on our very first bill we’re going to repeal 87,000 IRS agents,” McCarthy said, using a number Democrats have repeatedly said isn’t an accurate representation of what the funding boost would do. “Our job is to work for you, not go after you.”

None of the proposals that were sketched out came with a price tag showing how much a Republican House would change spending compared to current levels. Republicans also said they’d “protect the lives of unborn children and their mothers” but did not detail exactly what nationwide abortion restrictions they’d bring to the floor, or how they’d address maternal mortality rates.

Louisiana Rep. Steve Scalise, who would likely move from whip to majority leader if his party regains control, said Republicans would put forward bills to reduce inflation and bring down energy costs.

“We wanted to lay out a bold, conservative vision to show the country there’s hope again,” Scalise said. “The commitment to America is going to show the country, if you give us a Republican majority in the House, these are the things we will do.”

Democrats broadly panned the Republicans’ rollout of their plan.

House Majority Leader Steny Hoyer, a Maryland Democrat, said during a speech in Pittsburgh that the House GOP’s “new platform, which isn’t new at all, is long on slogans and short on details.”

Both parties are pouring millions of dollars into swing districts throughout the country, hoping to convince voters that their vision for the country’s future is the best path forward following a tumultuous few years that included a pandemic, a Jan. 6, 2021, insurrection by Donald Trump supporters hoping to overturn the results of the 2020 presidential election and record inflation.

The U.S. Supreme Court’s decision to overturn Roe v. Wade this summer, ending half a century of abortion as a constitutionally protected right, is also playing out on the campaign trail.

Democrats have repeatedly urged voters to reject GOP abortion policies by keeping them in control of both chambers of Congress, while Republicans have tried to sidestep the issue in some more contentious races.

“Oz is a fraud who does not even have the guts to give a yes or no answer when it comes to how we would vote on the abortion ban bill that has been introduced in the U.S. Senate,” Fetterman said in a statement Friday. “He’s dodging this very real question and thinks Pennsylvanians won’t notice.”

That close race in the Keystone State and others likely drew both the Republicans and Hoyer to its southwest corner on Friday.

House Republicans say if voters give them back control of that chamber, they’d create a “future that’s built on freedom,” in part by preventing transgender women from competing in women’s sports and lowering health care prices by boosting competition.

The proposal also calls for the GOP to “save and strengthen” Social Security and Medicare, though it doesn’t provide any details about how they’d change the longstanding popular social programs that primarily serve the elderly.

Those two entitlement programs along with Medicaid are categorized as mandatory government spending, meaning they run mostly on autopilot and represent the fastest growing section of federal spending.

Under the section on government accountability, Republicans tackle abortion without specifics, though during this session of Congress, House Republicans have introduced more than 100 bills addressing abortion in some way.

One bill, from Pennsylvania Republican Rep. Mike Kelly, would bar abortions after a fetal heartbeat is detected, typically about six weeks into a pregnancy and sometimes before a woman knows she’s pregnant.

The measure, which has 123 co-sponsors, has an exemption for abortions that are essential to save the life of the pregnant patient, but not for rape or incest.

Legislation from West Virginia Rep. Alex Mooney, backed by 166 co-sponsors, would “implement equal protection for the right to life” at the moment of fertilization.

The legislation doesn’t detail if or when women would be able to access abortions, including in cases of ectopic pregnancies, which are never viable, or miscarriages that sometime require the same medications or procedures as elective abortions.

A 20-week abortion ban, sponsored by New Jersey Rep. Christopher Smith, has the backing of 173 House Republicans. The proposal includes exceptions after 20 weeks of pregnancy if it’s the result of rape or incest, but only if the patient “has obtained counseling for the rape” or “has obtained medical treatment for the rape or an injury related to the rape.”

A child whose pregnancy is the result of rape or incest would be allowed an abortion after 20 weeks if the minor has reported the crime to a “government agency legally authorized to act on reports of child abuse”, or law enforcement, under Smith’s legislation.

Abortions after 20 weeks would also be legal if the pregnancy would endanger the patient’s life because of a physical illness or injury, but not “psychological or emotional conditions.”

U.S. House Republicans at the rollout celebration Friday didn’t mention their abortion proposals, but did detail many other aspects of their plan for a GOP majority, including investigations.

Ohio Rep. Jim Jordan pledged that various committees would hold investigations into the U.S. military’s withdrawal from Afghanistan, the origins of COVID-19 and various actions by the U.S. Department of Justice.

“We are committed to doing the investigations that need to be done,” Jordan said. “After all, that is part of our constitutional duty, to do the oversight and make sure you, the country, we, the people, have the facts and the truth.”

On education policy, Louisiana Rep. Julia Letlow said Republicans would bring up her so-called Parents Bill of Rights, which would impose new national regulations on state and local education bodies.

The legislation would require local education agencies to post the curriculum for elementary and secondary schools on a public website, or widely disseminate it to the community if they don’t have a website.

Local education agencies would need to create annual report cards detailing all revenues and expenditures for the entire school system as well as each school.

“This is common sense legislation. It’s just about providing transparency for us,” Letlow said. “And so you, as a parent, should always—the first and foremost thing, be able to view your child’s curriculum.”

Parents would also be granted the right to know if states change their academic standards, to meet at least twice a year with their child’s teacher, to review the books and reading material in the school library, and to receive information about violence within the school.

Hoyer, in Pittsburgh, said there were few specifics from Republicans “because the true details of Republicans’ agenda are too frightening for most American voters. Details matter, however.”

“These appalling proposals have long been advanced by right-wing politicians and are widely supported by the dark money special interests who call the shots in the GOP,” the California Democrat said.

“But this extreme MAGA agenda is way out of step with Americans’ priorities, who align with Democrats’ vision of putting People Over Politics: with lower costs, better-paying jobs and safer communities.”

President Joe Biden, speaking at a Democratic National Committee event at the National Education Association headquarters in Washington, D.C., rebuked House Republicans’ plans, saying it was “a thin series of policy goals, with little or no detail.”