Untouchable, Tradeable And Unlikely To Be Moved 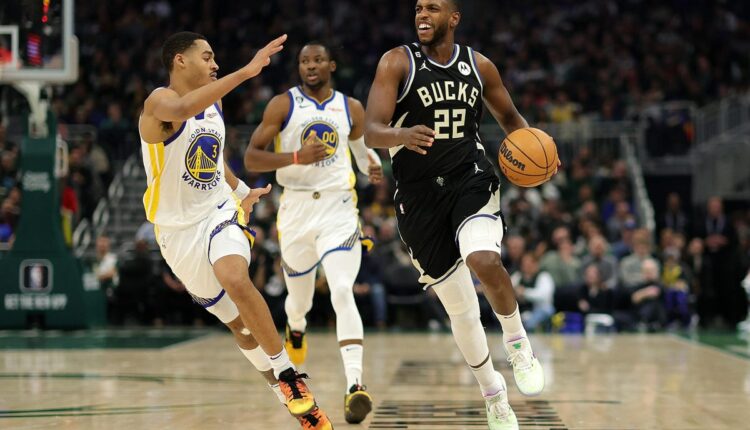 MILWAUKEE, WISCONSIN – DECEMBER 13: bb22 of the Milwaukee Bucks is defended by Jordan Poole #3 of … [+] the Golden State Warriors during a game at Fiserv Forum on December 13, 2022 in Milwaukee, Wisconsin. The Bucks defeated the Warriors 128-111. NOTE TO USER: User expressly acknowledges and agrees that, by downloading and or using this photograph, User is consenting to the terms and conditions of the Getty Images License Agreement. (Photo by Stacy Revere/Getty Images)

We are still a couple of months away from the 2023 NBA trade deadline, but it’s never too early to start thinking about who could be on the move.

The Milwaukee Bucks have reportedly been engaged/interested in Jae Crowder trade talks since the beginning of the season, but something has yet to materialize. That could change any day.

Milwaukee is always looking to upgrade its team and improve its chances at winning another NBA Finals. They have the core pieces in place for another deep postseason run and could benefit from some rotation-altering moves. With Jon Horst’s history, chances are good they will make another deal before the deadline in February.

To determine where individual Bucks’ stand, let’s put on our general manager hat and do some role-playing. I’ve placed the 15 rostered players into tiers based on what Milwaukee should say if an opposing team calls with a trade offer.

Not In A Million Years

There’s absolutely no way I’d trade away Giannis Antetokounmpo. If you called proposing a deal, I’d either hang up before you finish your sentence or laugh you off the phone call. Next.

I almost added these two players in the first category, but thought there could be a scenario where trading them is justifiable (it would have to be an offer that…blows me away).

Holiday and Lopez are key components to everything the Bucks do on both ends of the floor. Holiday locks in at the point of attack and Lopez anchors the defense at the rim. Without them, Milwaukee would look completely different. The only way I’d ever move them is with an incredible offer that helps set the Bucks up for long-term success.

Middleton is the trickiest situation on the roster. He is making $37.9 million this season and has a player option for the 2023-34 season at $40.4 million. He’s also eligible to sign a contract extension at any point.

He returned from an offseason injury just a couple of weeks ago, but missed the last two games due to knee soreness. He looks like he hasn’t played in nine months (surprise!), sparking some questions about his longevity alongside Antetokounmpo.

At 31-years-old, the Bucks will have to start thinking about the next wave alongside their MVP. However, that time is not now. I’d listen to a phone call, but would be very, very hesitant to move Middleton—his fit and value to the Bucks is higher than anywhere else.

Portis has been amazing in a Bucks’ uniform. After two years of being underpaid, he re-signed with the team on a four-year, $48.6 million extension last summer (he still might be underpaid).

He sacrificed a lot of money to stay in Milwaukee after they won their championship and is fully committed to the city. Unfortunately, the NBA can be a harsh business and I would move Portis if the right deal came along. Remember, he was benched for most of the second-round clash against the Brooklyn Nets in 2021 and there are still some questions about whether he’s a 16-game player. He’s made some strides and works incredibly hard, however, the Bucks would be ignorant to put their head in the sand on any trade call that may come in. Side note: He’s not eligible to be traded until January 14th, 2023.

Connaughton (who can’t be traded until January 15th) and Carter are key rotational pieces for the Bucks. They demonstrate the tough, hard-nosed mentality the Bucks are all about and provide decent positional flexibility.

Connaughton signed a three-year extension last offseason that will increase his annual salary to $9.4 million. Carter has a $2.2 million player option for next season. Either player could be moved in a deal, but the Bucks would have to get a known postseason commodity in return. Connaughton, especially, has proven himself as a valuable rotational player come playoff time.

Beauchamp’s numbers haven’t been great, but he’s shown flashes throughout his rookie campaign. Milwaukee has him under a cheap contract for the next four years, a valuable asset considering the rising projection of the rest of their salaries.

If his potential comes to fruition, he could become a three-and-D wing who brings more toughness to the Bucks’ rotation. He seems to have a great mindset and is intent on doing everything he can to help Milwaukee win.

Allen’s name has been floated in trades (mainly concerning the Phoenix Suns and Crowder) for months. However, nothing has materialized yet. I’m hesitant to move Allen for Crowder considering the former’s growth in several key offensive areas. I still chalk up his lackluster second-round performance against the Celtics to the absence of Middleton and being asked to do too much.

Allen’s timeline also matches up with Antetokounmpo’s. Milwaukee will need to start pairing their star with like-aged players, as they prepare for the second half of his career. Continuing to flip mid-to-late twenty-year-olds for early-to-mid thirty-year-olds doesn’t add up. I’d be open to moving Allen, but for the right player.

It’s highly unlikely either Hill or Nwora will get traded on their own. Neither player provides any value for other teams. It’s most likely they get included in a deal as a salary-filler. The NBA has strict rules about incoming and outgoing salaries in any deal, and Milwaukee’s roster is uniquely set up to make that as difficult as possible. Hill and/or Nwora could help fill the gap.

None of these three players is likely to be moved in a deal. The Bucks just signed Ingles last summer and it would be a bad look if they immediately traded him away. He just returned to the court and can potentially add a new offensive dynamic in Milwaukee.

Ibaka and Matthews’ salary is too light to really help in a deal which is the only way they’d ever be traded. Their veteran leadership and work ethics are great examples for some of the younger players on the Bucks.

Antetokounmpo is only on the Bucks’ roster because of the other Antetokounmpo. Milwaukee would risk upsetting their franchise star if they traded away his brother. Besides, he’s not an NBA-caliber player, so no other team will want him.

As state treasurer’s office swings to Republican, potential for a dramatic shift