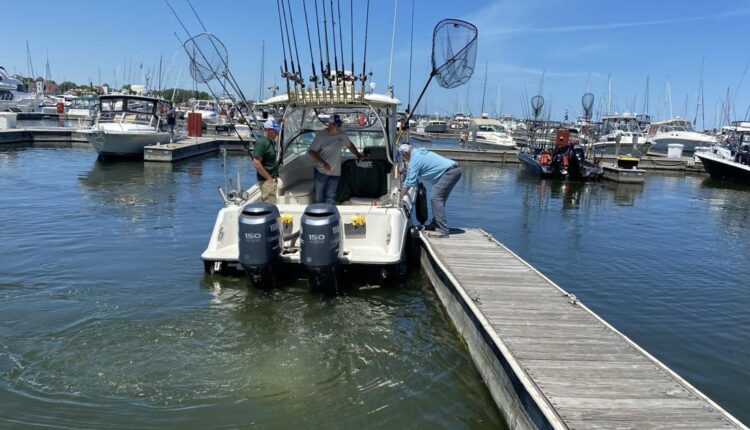 RACINE — As a gorgeous Sunday replaced the challenging conditions of Saturday, Jason Reuter and Mark Koonce headed out onto Lake Michigan for Salmon-A-Rama’s Two On A Boat contest.

Most of the boats competing in the tournament headed north out Racine onto Lake Michigan. Reuter, a 48-year-old Kenosha man who won this contest last year with a different partner, decided to head south in his 25-foot boat “Violator.”

Within six hours, Reuter and Koonce returned to Racine with a haul of five fish weighing a total of 68 pounds. And Reuter was a champion for the second straight year.

Reuter credited his new fishing mate, Koonce, for helping him win again. And he certainly credited the dramatic change in weather conditions Sunday.

“(Saturday) was awful,” Reuter said. “We got out in the afternoon for about two, three hours just because we had to move from Kenosha up to Racine. We didn’t fish in the morning. There were eight-foot-plus waves, so hardly any of the boats got to fish yesterday.”

Sunday was dramatically different. There were gorgeous blue skies, temperatures approaching 80 and much more manageable waters because of lower winds.

Reuter and Koonce, who work together in the diagnostic division of Abbott Laboratories in Illinois, used dodgers and flies to land three chinooks (the largest was 19 pounds), an 18-pound lake trout and an 8-pound steelhead.

Why did Reuter decide to head south when most of the other boats headed north?

“We’re a Kenosha boat, we had good fishing there Thursday and Friday and we know that water really well,” he said. “We feel comfortable there. We feel confident there. So we went back to the last spot where we knew we had good fish. That was the best intel we had.”

Where exactly was that spot?

Reuter fished last year with Adam Folkes, who was unavailable for this contest. Koonce fit right in, even after he initially felt some pressure, because he said, “I’m the new guy.”

“We got our lines in and we actually caught our first two fish within the first hour,” said the 50-yeat-old Koonce, who lives in Libertyville, Ill. “Then we went into a dead zone for about the next two hours where we didn’t catch anything. We got a couple of bites, but they didn’t hit hard.

“But then they started to hit again and then we had one more lull. And then toward the very end, like the last hour, is when we caught two of our largest fish. That sealed it for us.”

Reuter and Koonce will split their prize money, the amount of which is yet to be determined. But that’s not what matters to Reuter.

“There is money, but we get a plaque and the fun thing is we get the bragging rights,” he said. “You compete against a lot of really good teams. You see Stormtrooper with one of the best fishermen on the lake and all the boats that are in here.

Federighe was not able to be reached Sunday. But Craig Bender, a longtime SAR volunteer, was impressed by the improving fishing conditions.

“Conditions were good (Sunday),” Bender said. “There some nice kings being caught finally and a lot of lake trout coming in today also and some coho salmon are still around.

“Everybody’s catching fish now. It’s not outstanding, but it’s very good and some very nice big fish are being caught.”

However, conditions are expected to worsen again Monday and southwest winds could reach 15 to 25 knots, especially in the morning. Waves could be four to six feet.

“We’re going to get some wind tomorrow, so I think we’re going to have to watch out for some warnings on the lake,” Bender said. “So anglers should watch the weather.”

A big assist could come from a new buoy, that was put on the lake by Salmon Unlimited of Wisconsin.

“Salmon Unlimited now has a weather buoy, approximately six miles off shore off of Racine that gives anglers a very good opportunity to see the wave conditions in real time off of Racine and the wind conditions. And also, the water temperature at various depths.”

Bender recommends fishing for brown trout in shallow water on Monday and staying, “inside of 100 feet,” for salmon.

Colorado’s Efforts Are Not Enough to Solve Its Ozone Problem