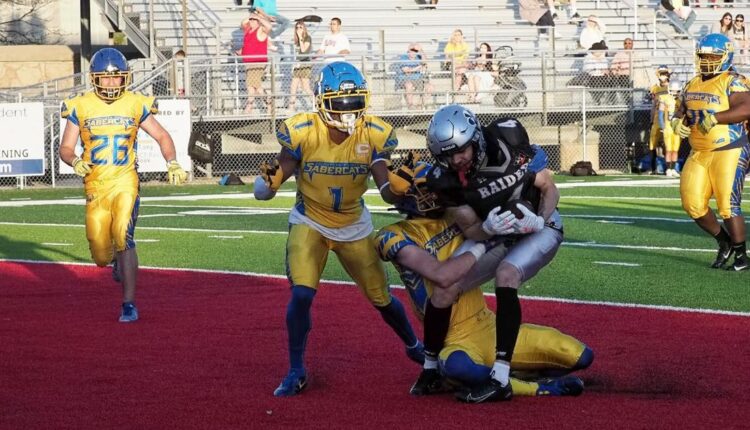 RACINE — The Racine Raiders are renewing old acquaintances Saturday night, and this reunion has the potential to become a classic.

Coming off a season-opening 39-0 victory over the Sheboygan County SaberCats, the Raiders will play the St. Paul Pioneers in a 7 pm nonconference game Saturday night at Horlick Field. It will mark the first time these two teams have met in nearly 13 years.

In terms of rivalries in the nearly 70-year history of the Raiders organization, this one ranks near the top. The Raiders and Pioneers have split eight games, with Racine winning the first four and St. Paul winning the latter four. The Pioneers have an 11-point edge in scoring between the two teams (173-162).

“It was a real good rivalry going back and fourth,” said Matt Nelson, president of the Raiders and the Mid-States Football League. “We used to have a home and away with them at one time and we’re trying to get another one. We’ll be going to their place next year.

Raiders coach Wilbert Kennedy, a defensive lineman for Racine from 1989-2009, what in his final season as a player the last time these two teams met. He remembers the competition the Pioneers brought in each of their eight showdowns against the Raiders.

“We had a great rivalry with the Pioneers,” Kennedy said during the Raiders’ weekly practice Wednesday night at Horlick Field. “They were always very tough and they were a lot of fun to play against.

“It was a good group of guys and they played great football. Whether we played them in a preseason game or it was a playoff game, it was always just so much fun to play them. I love that they’re on the schedule and it will be a real test to see where we’re at and what we need to work on and to give these guys a taste of what it’s like to play a team of that caliber.”

The Pioneers, a member of the North Elite Football League, have won multiple national championships, as have the Raiders. They are off to a 1-1 start this season.

Kennedy and his staff reviewed game film of the Pioneers from late last season and saw the same quality team he remembered from the 2002-09 rivalry.

“It’s almost as if they like to lull you to sleep before they slit your throat. So to have a team that’s patient like that and is waiting to see if they can get what they want, that makes it difficult to play a team like that. Most teams aren’t that patient.”

Jordan Payne, a game-breaking receiver for the Raiders who is trying to continue his playing career after joining the Kenosha Police Department last winter, attended practice Wednesday. Kennedy does not know if Payne will be available for Saturday’s game.

But he expects to have former Case High School standout Isaiah Trussell, one of the Raiders’ best offensive linemen. Because of his work schedule, Trussell isn’t always available to play.

A major pickup for the Raiders could be wide receiver-tight end Jermaine Clemon, a 2010 Horlick High School graduate who went on to have a distinguished career for Concordia University in St. Paul, Minn.

The 30-year-old Clemon, who is 6-foot-4 and 220 pounds, believes he can make an impact after being out of football for several years.

“This has always been a part of my life,” Clemon said. “Through trials and tribulations, I allowed the game to slip away. But now is the perfect time to come back and re-fall in love with football in its entirety.

“My whole motto that I went by for years was ‘faith, family and football.’ With football being out of the picture, I kind of felt off balance. This gives me the opportunity to come back and prove to myself that I can do it.”

Nelson, who has returned this season to be the Raiders’ offensive coordinator, was once a tight end of the team. He believes Clemon can be a major addition.

“He had some accolades when he played in college,” Nelson said. “When I shook his hand, he’s got huge hands, which I love in tight ends. Our offense is geared more for a tight end-type of player.

KHN’s ‘What the Health?’: Waking Up to Baby Formula Shortage