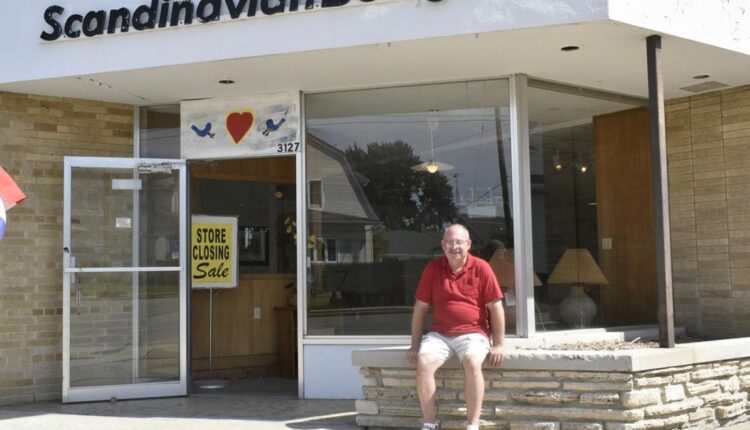 Nearly 50 years ago, Paul Rizzo’s parents’ Carmen and Sam Rizzo decided they wanted to open their own furniture business.

Carmen was an interior designer and Sam, who worked for American Motors, was something of a handyman, selling real estate and building houses.

With the help of their three kids and plenty of extended family, Scandinavian Design, 3127 Roosevelt Road, opened its doors for the first time to customers in August of 1974.

Paul Rizzo’s collection of photos from the early years of the store include a group image of the family sitting on the storefront’s ledge. Going by the store now, it’s hard to see what’s changed in nearly five decades, other than some paint and a giant “store closing” sign.

“It’s bittersweet. My parents were very charismatic, they drew in a lot of people. It was always fun,” Paul said. “But it was their dream.”

Both of Paul’s parents have since passed, and after almost a decade of carrying on their dream, the doors on the business will be closing for the last time by the end of the month, 48 years after they opened.

Since 2013, when the store reopened from its “dormant state” during the early 2000s recession, the store has been largely open only on Saturdays. Paul, who lives in Illinois, would come up to Kenosha to sell off the remaining inventory left after his father’s passing in 2012. His mother passed away several years earlier, in 2004.

“50 days a year, it takes a long time at that rate to sell everything,” Paul said with a smile.

Now in his 60s, Paul was just 16 when the business opened, working along with his twin Paulette, who passed several years ago, and sister Renee. Paul worked in delivery and assembly, which he said let him get to know the customers and people of Kenosha. HE attended UW-Parkside for accounting, and then moved to Chicago, returning to Kenosha on weekends to help the store.

“I had a unique opportunity to visit a lot of people in their homes,” Paul said. “You have a chance to talk about their lifestyles and how that furniture complements that.”

Most of the furniture in the two-floor store is gone now, leaving some pieces that Paul said he put together from leftover parts, and various smaller decorations or leftover equipment he was giving away for free.

“Last time it was this bare was when we opened up,” Rizzo said, gesturing to the largely empty showroom floor.

Now retired, he plans to travel with his wife once the store closes and perhaps find new hobbies beyond building furniture. With such a long chapter of his family’s history coming to a close, he expressed his thanks to the community his parents served for so many years.

“What I want to convey, on behalf of my parents, is a heartfelt appreciation and gratitude for all the customers,” Paul said. “Thank you very much. We’ve had 48 years, and it’s been fun.”

The future of the store is uncertain, although Rizzo said he hopes to find a community-oriented business or organization to take over the location.

Upgrade your room with these dorm DIYs from TikTok

You don’t have to spend a ton of money for a cool wall clock. Instead, try this DIY from @emilyrayna to make a $4 Walmart clock look like a work of art.

Whether you lack a green thumb or your dorm room lacks natural light, these DIY paper plants from @joshuarcher_ are an adorable substitute for the real thing.

TikTok creator @emmarupard made some pretty glowing curtains with string lights and sheer material. These would make a great room divider for a shared dorm.