What is a Matt Walsh? – Isthmus 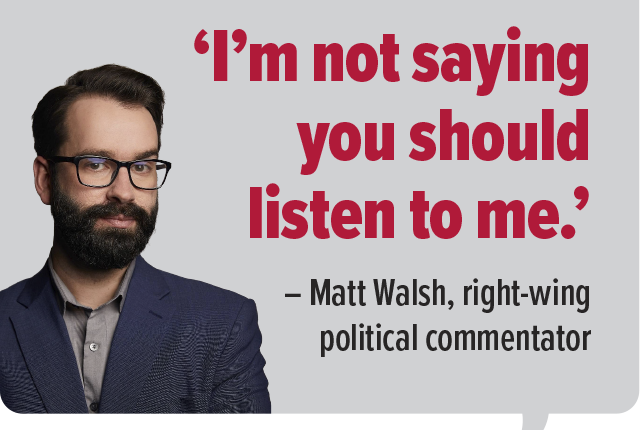 to october 24 event with right-wing political commentator Matt Walsh on the UW-Madison campus sparked protests, counter-protests, and vandalism of university property. The local chapter of the Young America’s Foundation, headed by former Wisconsin Republican Gov. Scott Walker, invited Walsh to give a speech at the Memorial Union on his new documentary, What is a Woman? Hundreds of students were outraged that UW-Madison allowed Walsh to speak on campus because of his controversial — some would argue bigoted and harmful — opinions of transgender people.

Tell Dylan won’t dive into Walsh’s remarks at the event — which were pretty much what one would expect from a speaker who, in 2021, called school board members in Virginia “child abusers” for allowing transgender students to use restrooms that match their gender identity. A video of the event is posted on YouTube if you’re interested. However, the Q&A portion of the event did provide some insight into the minds of college conservatives at Wisconsin’s infamously liberal flagship university and there were a few thoughtful questions to boot.

The first student asked Walsh his thoughts on cultural trends in America.

“Basically, even less than 10 years ago, homosexual marriage was illegal in the United States. And even in the short time since Obergefell v. Hodges, we’ve lost so much ground in this country to perverse sexual issues,” said the student, referring to the 2015 US Supreme Court case that legalized same-sex marriage nationwide. “What do you think is next on the slippery slope of societal-degrading causes?”

One UW-Madison student asked Walsh, “How does a conservative like myself maneuver modern college campuses in a way that is not destructive to me or hopefully to other people?”

Another student, who indicated he supports Walsh’s opposition to transgender rights, did push back on Walsh’s viewpoint that it should be illegal for doctors to provide medical treatment to individuals with gender dysphoria.

“My question is if adults can get vasectomies, eat until they get diabetes, etc., shouldn’t they be allowed to take hormones if it reduces their likelihood of committing suicide and their doctor approves, even if you or I disagree?” asked the college student.

Towards the end, a student pointedly challenged the merits of the arguments Walsh presented during his campus appearance.

“Eight months ago, I was diagnosed with gender dysphoria while I was an inpatient here at UW-Madison [hospital]. I looked into the research and talked to doctors, and through my journey, I decided to explore medically transitioning because it’s shown to decrease suicidal ideation,” the student said in a respectful tone. “Since then — although I’ve had to deal with other issues such as transphobia and sexual assault — I’ve been happier overall than I ever was before. And my question to you is, what specifically about medically transitioning do you think is so immoral? [Why] should we ignore the potential benefits? And why should I listen to you as somebody who’s not a medical professional and has not experienced gender dysphoria?”

Known for calling supporters of transgender rights “Nazis” and “pedophiles,” Walsh answered the question without hostility but doubled down that medical transitioning is immoral and should be banned by the government. Walsh told the student doctors shouldn’t be trusted because they make money off providing treatment to transgender individuals, but added: “I’m not saying you should listen to me like I’m the ultimate authority on all things.”

Kenosha was accused of hit-and-run, driving while intoxicated