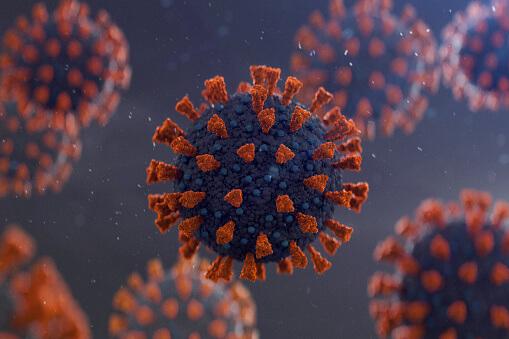 For the second day in a row, Wisconsin has recorded deaths from COVID-19 on a scale not seen since the first two months of this year, the state health department reported Wednesday.

In the first two weeks of October, there have been 100 reported deaths from the illness caused by the SARS-CoV-2 coronavirus. Half of those were logged this week, with 40 deaths recorded Monday and another 25 recorded Tuesday, according to the state Department of Health Services (DHS).

“We’re still in a place where we’re identifying more than 2,000 new cases of COVID every single day,” said Karen Timberlake, DHS secretary-designee, during an hour-long panel discussion sponsored by WisPolitics.com and conducted on Zoom. “We’re in a place where we have more than 1,100 people hospitalized across our state with COVID. Today, we have lost 100 people in the state of Wisconsin to COVID since October 1.”

There are signs in recent days that the most recent surge might be reaching a plateau. As of Tuesday, DHS reported that across Wisconsin, there were 2,318 new cases a day on average over the previous seven days. That seven-day average has gone down steadily since Friday, Oct. 8, when it stood at 2,633.

But it’s too early to be certain, said Timberlake, who counseled, “Let’s be optimistic and let’s be cautious at the same time.”

A year ago, she observed, Wisconsin saw COVID-19 cases rise through September, then appear to be on the verge of trending downward. “And then it shot up,” Timberlake said, with the fall surge that galloped ahead in November.

Even if case counts are beginning to level off, “we are plateauing right now at a very high level of overall cases,” she said. 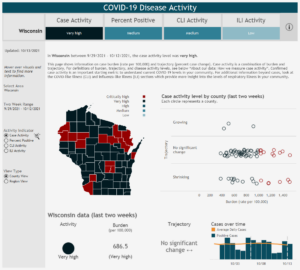 Wisconsin Department of Health Services weekly COVID-19 dashboard for Oct. 13, 2021. The red counties are where case activity is “critically high.” In the remaining counties, activity is “very high.” Click on the image to enlarge. (Graphic courtesy DHS)

The weekly update that DHS posts on Wednesdays showing the level of virus activity across the state reports 16 counties where virus activity is “critically high” and the remainder of the state with activity “very high.”

“We’re six to seven times higher right now than the CDC says is a high level of infection,” Timberlake said. “Maybe we’ve plateaued, maybe we’re coming down, but we’ve got to come down farther to be able to say that we’ve truly crested this wave.”

To bring down the numbers, she said, requires digging in across the state to what has been the constant advice from early in the pandemic — advice renewed this summer as the mutation of the virus known as the delta variant began to spread widely, reversing what had been a steady decline since early in the year.

“We’re all completely sick and tired of it,” Timberlake said of the pandemic. But prevention can’t stop, she added, “whether it’s a person still wearing a mask in their workplace, whether it’s a child being tested [for the virus] at school — all of those things are part of that ongoing persistence and commitment to get through this together.”

It also means continuing to make COVID-19 vaccines available and persuading people who aren’t yet vaccinated to step forward and get the shot. DHS reported Wednesday that 54.5% of the state’s population is completely vaccinated, a number that has been continuing to edge slowly upward over the last few months.

COVID-19 vaccinations have been tapering off in recent weeks. DHS reported that in the first full week of October, 36,000 doses of one of the three vaccine types were given. Three weeks earlier, in the week of Sept. 12, there were 61,372 doses given.

Timberlake said that the emergence of the delta variant earlier in the summer helped to boost interest in getting vaccinated, as did a month-long state incentive program awarding $100 gift cards to people who started the vaccination process.

She looks to continued awareness of the delta variant and the pressure that rising cases have put on hospital systems to help encourage more people to get vaccinated. Vaccines are widely available, she added, with 700 to 1,000 locations around the state where people can go to get the shot.

Still, more people need to make use of those opportunities, Timberlake said.

“We are seeing very high rates of COVID infection among children right now, in part because we have so many younger kids who still cannot be vaccinated, and because our vaccination rates in the 12- to 17-year-old group are not as high as they need to be,” she said.

Flu shots, now widely available for everyone age six months or older, are also needed in what is being forecast to be a bad year for influenza, she added. “What we know nationally is that about half of the country says they’re likely to get a flu shot,” Timberlake said. “That’s not going to be good enough — we are going to have to do better than that.”

There has been “very, very strong vaccine resistance” in areas of western and northern Wisconsin that the Marshfield Clinic Health System serves, according to Dr. Susan Turney, Marshfield’s CEO. Employees have been complying with the health system’s vaccine mandates, but Turney said there has also been “a lot of backlash” in some of the communities where it operates. “Like others, we had protests outside our facilities,” Turney said. “We had providers and staff that have been harassed, both in person as well as online, for doing their jobs.” 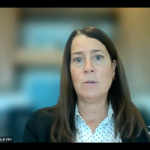 Chris Woleske, CEO of Bellin Health System, which operates hospitals and clinics in northeastern Wisconsin and Michigan’s Upper Peninsula, said Bellin’s vaccine mandate has also drawn protests, even as many people supported it. Before the company announced the requirement, just under 80% of the Bellin workforce was already vaccinated, she said. The number has since grown to 82.6%.

Some people will be given exemptions, but some employees “will leave because of the requirement,” Woleske acknowledged.

Those who are not trained specifically in epidemiology and infectious disease might have difficulty understanding the details of how the vaccine works, she added; Bellin has enlisted its affiliated doctors who are trained in those fields to help explain the vaccine to skeptical employees, which Woleske said has been “very, very beneficial.”

Turney said one lesson of the pandemic was the way it exposed longstanding disparities in society. 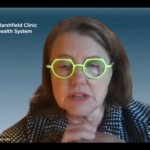 “The issues fell disproportionately on the poor, the elderly, certainly folks in isolated rural areas like ours, as well as under-resourced urban communities,” said the Marshfield CEO. “When people who are being paid the least were deemed essential workers and they were taking on some of the most risk, it created many fault lines.”

COVID-19 “revealed the inequities that we have been aware of” — but also magnified those differences, she added. “We might have been complacent about many of these things in the past.”

On the issue of equity, DHS announced Wednesday that the department will be disbursing $27 million awarded by the CDC for grants to address inequities in infections, illness and death from COVID-19, including disparities in communities of color, where the pandemic has had a disproportionate effect. The award also includes $9 million that will be dedicated to rural communities, the agency announced.

In addition, DHS has set aside an additional $13 million in federal funds for vaccine outreach in marginalized and underserved populations. 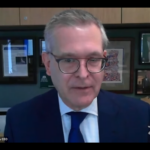 Speaking on the WisPolitics.com panel, Dr. John Raymond, president of the Medical College of Wisconsin based in metro Milwaukee, said what he called “a lack of vaccine confidence” can be found both in isolated rural areas as well as among people of color in urban areas, for overlapping as well as distinct reasons.

For African Americans who are reluctant, that might be “based in part on justifiable mistrust of science and medicine from history,” Raymond said, while rural residents might feel “that vaccinations are unnecessary in their community.”

Economic inequality for people who have had to work during the pandemic in service jobs has also played a role, he added, particularly if they lack strong support networks or the kind of flexibility at work that they would need to get the shot.

“Just think about a single working mother with three kids at home who lives hand to mouth,” Raymond said. “Unless there’s a clinic available on a day that she’s off work, and she can get transportation there, it would be very difficult to be vaccinated. So those are the kinds of problems that we’re all dealing with.”

Tavern started for the 75th anniversary + fire from lighter