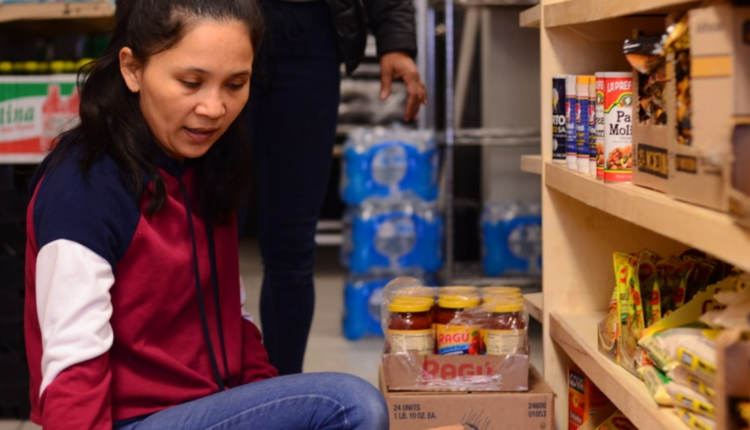 When Tony Moore wants to make a quick grocery run, his options are limited.

Most of the foods that fill the shelves in his Kenosha neighborhood are laden with sugar and fat — chips, soda and other sweets. Moore calls it the kind of food you eat to just “fill your stomach.” It’s the only food he can find at a gas station, after all.


In Moore’s neighborhood, two large grocery stores have closed since 2017, and in January, a small grocery there burned down — removing one more source of fresh meat and produce in an already deprived area.

Data from 2015 show that 10% of Wisconsin, or about 570,000 people, live in areas meeting the standards of a food desert, according to the U.S. Department of Agriculture.

Grocery stores typically operate on razor-thin margins, and changes in the market, labor supply or customer base can easily put them out of business — providing strong incentives not to build in underserved areas. In recent years, grant programs at the local and state level have supplied food deserts with subsidies in hopes of luring and retaining brick-and-mortar grocery stores.

Moore marks himself lucky compared to some of his neighbors — he owns a car and can drive to a supermarket in the area.

Tony Moore, executive director of mental health clinic Birds of a Feather, says his group home in Kenosha is in a food desert, where many local residents without transportation rely on junk food from a local gas station or fast-food chains. Roughly 10% of Wisconsin is considered a food desert, according to the federal government.


“People who have to catch the bus really catch the fluss, because now you have to carry groceries,” Moore said. “How much groceries can you have that you can carry?”

As the leader of a group home, Moore watches some of the community’s most vulnerable residents sustain themselves on junk food from nearby gas stations and fast food chains, where prices are higher than full-service grocery stores.

“You’re talking about going to a grocery store (and) spending $10 on what if you did it in a local neighborhood, you’re talking $25,” Moore said.

It’s more than just cost and convenience. According to the 2019 Milwaukee Fresh Food Access Report, distance from supermarkets correlates with higher rates of obesity, heart disease and diabetes.

“You don’t know you’re in a food desert until someone who is educated enough tells you you deserve better,” Moore said. “You don’t really even know the nutritional value of what you should have to help your mental health or your emotional health.”

The USDA uses a combination of income and access measurements to characterize food deserts. Census tracts where the poverty rate is 20% or where the median family income is 80% of the statewide average are considered low-income. Census tracts where at least 33% of the population lives more than 1 mile from a large grocery store in urban settings, or 10 miles in rural areas, meet the USDA’s definition of low access.

Under the low-bracket USDA measurement for food deserts, most of Milwaukee is considered to have low access to food — meaning a majority of residents live more than a 10-minute walk away from a store where fresh food is available.

Danielle Nabak is the healthy communities coordinator for the University of Wisconsin Extension Milwaukee County’s FoodWIse program. Like some other experts, she prefers the term food apartheid to food deserts because of histories including redlining, economic disinvestment and freeway expansions that isolated marginalized communities.

“I think that really gets at more of the active disinvestment and the active oppression that occurred to create the conditions that we’re really talking about when we talk about a food desert,” Nabak said.

For almost eight years, from 2006 to 2014, Florence County had no grocery store at all.

Living on the border of the Upper Peninsula of Michigan, residents of the county had to drive up to half an hour and cross the state line to buy groceries, according to Florence County Economic Development Director Wendy Gehlhoff.

“We were having to drive anywhere from 15 to 30 miles, depending on what part of the county you lived in, to a grocery store,” Gehlhoff said.

For Gehlhoff, the effort to close this grocery gap was a longtime goal, but it wasn’t until she discovered the Community Development Investment Grant in 2013 that she found the answer to Florence County’s problem.

The $250,000 grant provided by the Wisconsin Economic Development Corp. was “the last little bit” needed to finish the project, Gehlhoff said.

The grant provides money for Wisconsin municipalities to fund projects that will create jobs and spur the local economy. The funds from the grant mainly went to replace older equipment and remodel the site that is now Pat’s Foods, an IGA/Festival Foods market in Florence, the county seat.

But grants may not be enough to entice big grocery chains to invest in certain communities. Grocers typically don’t want to build in high-poverty or low-population areas where risk is certain.

“Just because you’re the only store in town doesn’t guarantee you stay in business,” Wisconsin Grocers Association President Brandon Scholz said. “Grocery stores require regular customers — it doesn’t get any more complicated than that.”

Supermarkets, especially those that serve foods such as meat and vegetables that expire relatively quickly, can easily lose money while running on a narrow margin of profitability. Depending on the item, it can range between 1% and 3%.

“To put it into the most basic language, you have to pay the bills,” Scholz said.

According to Scholz, large grocery stores which dominate the American market are not sustainable in food deserts. And with the high upfront costs to open a new store, not making enough money means something has to get cut — whether it be employees, benefits or advertising budgets.

“Everybody understands that they need a store,” Scholz said. “The question is, can you pay back the loan?”

In one Madison neighborhood, entrepreneur Mariam Maldonado is making it work. In 2019, Luna’s Groceries opened its doors — and closed the grocery gap in the Allied Drive-Dunn’s Marsh neighborhood. The store was awarded a $157,000 grant from the city of Madison aimed at improving food retail access in the area, Maldonado said.

Maldonado, a longtime resident of the neighborhood, had a vision for what is now Luna’s Groceries. When the site of a former check-cashing outfit on Red Arrow Drive came up for sale, Maldonado snapped it up.

Mariam Maldonado, the owner of Luna’s Groceries, used a grant from the city of Madison to help open her market in 2019 in a Madison neighborhood that had been lacking a supermarket for nearly a decade. She is pictured in the store on May 5.


The store serves a community with multiple ethnic enclaves where over half of residents are Black or Hispanic, and customers can expect a Spanish-speaking worker to greet and assist them. Luna’s is one of the few groceries in the city where you can buy Dominican longaniza, seasoned pork sausage, and Salvadoran, Mexican and Guatemalan cremas, which are similar to sour cream but tangier, staff member Yanci Almonte Vargas said.

“We have folks who are just coming to the U.S.,” Almonte Vargas said. “And it’s their first month here, first day, and they go into the store, and I might not have the same accent or dialect of their country, but they can still speak in their native tongue and they can feel heard — and they can get what they’re looking for.”

Customer Christina Bojorquez appreciates the convenience of having a store nearby. Before Luna’s, Bojorquez had to travel several miles away to shop at Walmart or Woodman’s, a Wisconsin grocery chain.

“And now it’s better for me because I can stop before I go home,” Bojorquez said. “Especially nowadays, you know that gas is more expensive, so I can walk.”

The store fills a big gap for Allied Drive-Dunn’s Marsh residents without vehicles. The only bus that goes through the neighborhood is Madison Metro Route 18, which has no stops near any major grocery store.

Yannette Figueroa Cole, the alderperson who represents the Allied Drive-Dunn’s Marsh area, said the city invested in the community for years, but it wasn’t enough to provide the “resilient” neighborhood with access to food that it needed.

“City resources are limited; that’s where the community kicks in to fill up some gaps,” Figueroa Cole said. “Luna’s Groceries is an example of what happens when communities work together.”

Based on its success in Allied Drive-Dunn’s Marsh, the city of Madison approached Luna’s in 2020 to expand to South Park Street at a mixed-use development on the site of a former U.S. Army Reserve facility. The plan was for a 24,000-square-foot full-service grocery store, filling the looming grocery gap in South Madison as the nearby Pick N’ Save’s lease is set to expire.

But last year, Maldonado pulled out, partly because of the financial struggles she foresaw.

“Investing $10 million into a grocery store that will not be profitable for about seven to eight years, it was not a good investment,” Maldonado said.

She also worried that such a project would detour her from her vision of expanding Luna’s into a chain of three small stores across Madison in identified food deserts.

“When I think about my legacy, and what I want to leave for my kids … I want to have a grocery store that puts the neighborhood that it’s in first,” Maldonado said. “And to have an inventory that is built to the input of that neighborhood, that’s very important to me. Luna’s being so big in the Park Street area, I would not be able to match that.”

Even with local efforts like Luna’s and grants attempting to fill the gaps, eradicating food deserts is not a simple feat. Nabak said improving food systems is regularly near the top of the list of Milwaukee resident concerns, along with crime, safety and housing.

“Until we change some larger systems,” Nabak said, “we will probably always struggle with inequity in our food system.”

IN PHOTOS: Images from the 2022 Kenosha County Fair

Molly Schwertfeger, 16, shows her crossbreed pig at the Kenosha County Fair in Wilmot on Wednesday, Aug. 17, 2022.

Visitors make their way through the grounds at the Kenosha County Fair in Wilmot on Wednesday, Aug. 17, 2022.

Jimmy Storck makes bubbles of all sizes for children at the Kenosha County Fair in Wilmot on Wednesday, Aug. 17, 2022.

harper Calcagno, 5, hits the sky while doing the Xtreme Jump at the Kenosha County Fair in Wilmot on Wednesday, Aug. 17, 2022.

Caden Warren, 17, left, gets a hug from his sister Jalyn, 19, after his crossbreed pig was named the overall grand champion of the junior swine show at the Kenosha County Fair in Wilmot on Wednesday, Aug. 17, 2022.

Young farmers show their crossbreed pigs at the Kenosha County Fair in Wilmot on Wednesday, Aug. 17, 2022.

Max Marquardt, 8, gets help from his mom, Christie, with getting onto a 1956 J.I. Case Model 400 tractor at the Kenosha County Fair in Wilmot on Wednesday.

The judge of the sheep show examines the sheep while the contestants brace them.

Sheep are braced by competitors in the sheep show for the judge to examine.

Competitors line up their sheep as they wait for the judge to choose the champion market lamb.


The nonprofit Wisconsin Watch collaborates with WPR, PBS Wisconsin, other news media and the University of Wisconsin-Madison School of Journalism and Mass Communication. All works created, published, posted or disseminated by Wisconsin Watch do not necessarily reflect the views or opinions of UW-Madison or any of its affiliates.