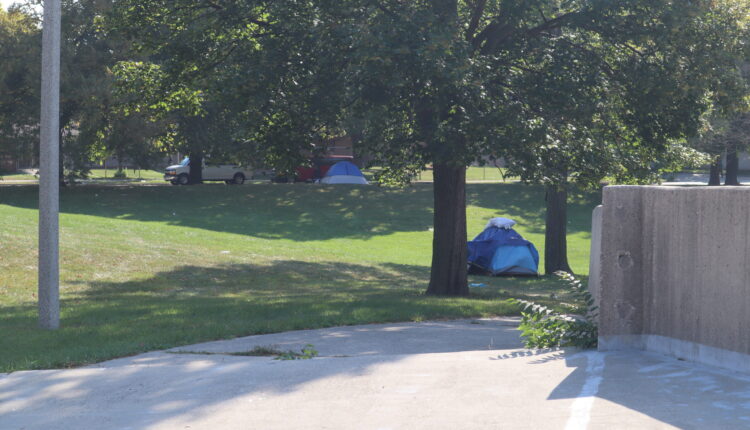 A Wisconsin lawmaker is proposing legislation that would authorize the state to establish local campsites for homeless people and criminalize camping on other public land.

Coupled with that, the legislation would also require the state to allocate $300,000 in federal pandemic relief money to pay for more local “housing navigators” to help homeless people find housing.

The legislation, AB-604, would also impose a “pay for performance” provision on state grants distributed by the state Department of Administration (DOA) to address homelessness.

The bill aims to “put pressure” on local governments to work harder to resolve homelessness in their communities, said Rep. Alex Dallman (R-Green Lake), author of the legislation, at a hearing Tuesday before the Assembly Housing and Real Estate Committee.

The bill would allow DOA to designate public property, including land owned by local communities, as “structured camping facilities” and to assign homeless people to stay there. People would be allowed to bring camping equipment to those locations, but the DOA would have to be responsible for public safety, potable water and sanitary facilities. The department could also require a person to get mental health or substance abuse evaluation before being allowed to use the designated camp.

At the same time, the bill outlaws camping on property that is not either a recreational campsite or one of the proposed state-run camping sites for homeless people. A person who camps illegally could be charged with a misdemeanor, facing a fine of up to $500 or up to 30 days in jail.

Another section of the bill would direct DOA to give $300,000 in grants to organizations for more housing navigators from the state’s allotment under the American Rescue Plan Act (ARPA).

That provision alone is likely to draw a veto from Gov. Tony Evers if it reaches his desk; the governor has repeatedly vetoed legislation that would direct how he spends the state’s funds from the federal pandemic relief legislation.

Penalizing agencies based on numerical results, she added, could lead them to focus entirely on the easiest-to-resolve cases, putting chronically homeless people who are most at risk “on the back burner.”

Very similar legislation has been proposed in Arizona, where it was furnished by the Cicero Institute, a Texas-based policy organization that proposes “entrepreneurial solutions” to policy problems. Tuesday’s hearing included testimony from Jared Meyer, policy director at the Cicero Institute who previously worked in the Trump administration.

“What does not work is allowing homeless individuals to camp wherever they want,” Meyer testified. Structured camping programs in cities in other states have worked, he said, enabling homeless people to be safer than living on the street.

The only hearing witness who has directly worked with homeless people testified against the legislation. No one who has experienced homelessness testified.

The bill’s offer of housing navigators “is a good idea,” said Marjorie Lewis, a Madison resident who has assisted homeless people who are severely mentally ill over the last six years. “But when you’re sending someone in to navigate in a marketplace where there isn’t any affordable housing, and then saying, ‘If you fail we’ll take your money away, and… we’ll give it to somebody else’” — Lewis paused. “Who’s going to do what?” she asked. “We don’t have any housing to navigate.”

The legislation was one of eight bills that Republican leaders scheduled for Tuesday’s hearing, all focusing on housing issues.

Of the remaining seven, one measure, AB-609, which would authorize local housing investment fund programs, has garnered bipartisan support and support from lobbyists for Madison and Milwaukee as well as the League of Wisconsin Municipalities.

Another, AB-607, creating a new housing rehabilitation loan program in the Wisconsin Housing and Economic Development Authority (WHEDA), also appears to have consensus support, based on lobbying filings with the Wisconsin Ethics Commission.

The other five bills got the endorsement of the real estate industry and one developer who testified Tuesday, but were universally panned by lobbying groups for local government. They also got a cool reception from the committee’s Democrats.

Interviewed after the hearing, Emerson criticized the decision to fast-track the bills, which were still in draft form late last week and were reportedly under consideration for a committee vote later this week. Fiscal notes have not yet been attached to the legislation, she observed.

“The devil’s in the details,” Emerson said. “It’s harder to get it right than to get it done.”