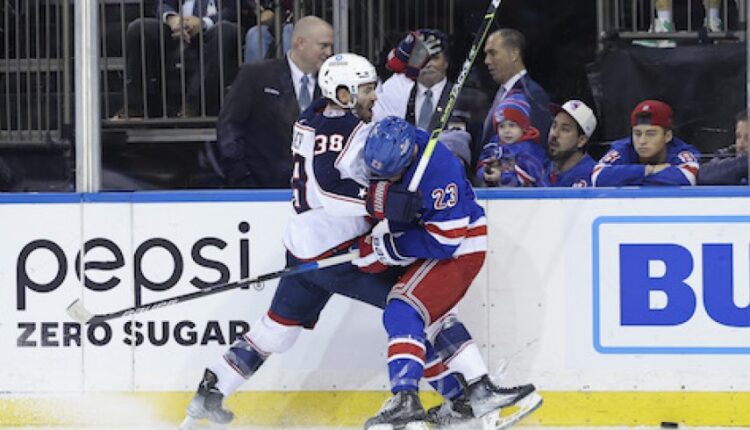 A big bounce back win.

Blue Jackets goalie Daniil Tarasov had to be sharp with just 14:40 remaining in the first period as he denied Ryan Carpenter on a two-on-one from the right circle.

The Jackets opened the scoring for the second consecutive game when Zach Werenski cleaned up a rebound from Liam Foudy just to the right of the blue paint with 2:06 to play in the opening frame.

The Rangers had the advantage through the first 10 minutes of the period but the Jackets bounced back in the final 10 as the Blue Jackets entered the first intermission up 1-0.

Columbus doubled his lead less than two minutes into the middle frame when Andrew Peeke’s right-wing wrist shot that Jaroslav Halak will want to have back.

Yegor Chinakov joined Peeke as Jackets to score their first goals of the year when he fired a wrist shot from the top of the right circle to extend the Columbus lead to 3-0.

The Rangers showed a sign of life when Artemi Panarin took advantage of a failed clearance by Gustav Nyquist and scored on a wrist shot from the high slot before the Rangers’ five-on-three power play expired with 1:16 to play.

Panarin gets the Rangers on board!

The Jackets took a 3-1 lead into the third period, in large part to the play of Tarasov, who made 15 saves in the middle frame.

Unlike last night, Columbus did not squander his two-goal lead. In fact, the Jackets added on.

Eric Robinson scored his first goal of the year when he deflected a right-point shot from Erik Gudbranson with 5:47 left in regulation.

Kent Johnson scored his second goal in as many days just 44 seconds later to the left of the Rangers’ blue paint to extend the Columbus lead to 5-1.

That was the final tally as the Jackets defeated the Rangers 5-1 and improved to 3-4-0 on the season.

Nick Blankenburg left the game briefly in the first period with an upper-body injury but returned soon after. However, he left the game at the beginning of the second period and was ruled out.

#CBJ say Nick Blankenburg suffered an upper-body injury and will not return against #NYR. Jackets playing with five defensemen for the rest of the game.