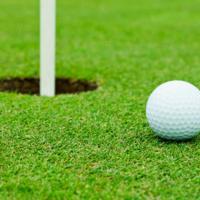 Ava Litkey was all alone for the Kenosha Bradford High School girls golf team Thursday in the Southeast Conference Tournament.

She was also all alone on top of the leaderboard.

The Red Devils senior, who has been her team’s lone player all season in SEC mini-meets and tournaments, finished off a strong season by winning the individual championship in the SEC Tournament at Meadowbrook Country Club in Mount Pleasant.

Litkey shot an 87 that featured two birdies, on the first and eighth holes, and a 39 on the front nine (par-36 for women). She struggled more on the back nine, but still had the second-best score there with a 48.

Litkey was a mini-meet medalist a few times and will be in the mix for SEC Player of the Year.

Franklin senior Olivia Schueller of Franklin, another strong Player of the Year candidate, was second with 44-47—91 and the only other player to break 100 was Park senior Kiley Skenandore, who shot 48-49—97.

In the team standings, Franklin won the title at 403, with Oak Creek second at 421, Racine Case third with 426 and Racine Park fourth at 442.

Tremper and Indian Trail were in a battle for fifth and sixth, with the Trojans edging the Hawks by one stroke, 458-459.

Indian Trail had two of the next-best Kenosha County scores after Litkey, with senior No. 1 player Maddie Dahlk shooting 49-56—105 to tie for ninth with three other players. Dahlk was 12th after the first WIAA tiebreaker (back-nine score) was applied.

No player statistics were available Thursday night for Wilmot (9-6, 3-1 SLC), which received votes in the Wisconsin Boys Volleyball Coaches Association state poll and remained second in the SLC behind Union Grove.

No player statistics were available Thursday night for Central (4-6, 2-2 SLC).

Shoreland won the girls race with 39 points over Rockford Christian (62).