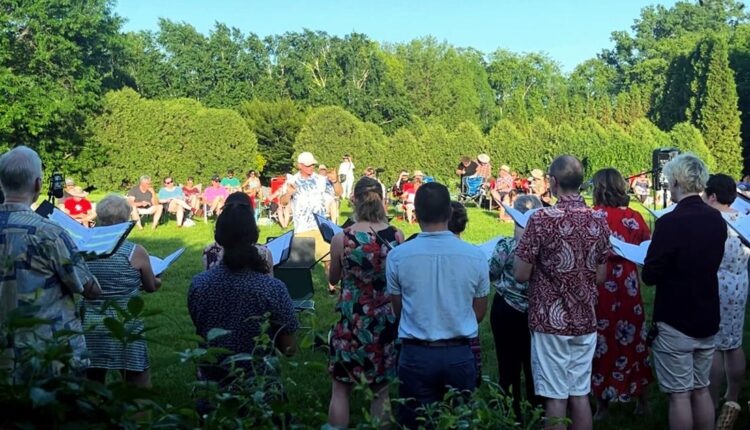 Visitors to Madison’s Olbrich Botanical Gardens could see more musical performances and art events thanks to a new endowment aimed at expanding such offerings.

The series began last week with a performance by the Madison Chamber Choir. Around 200 people brought picnic baskets and lawn chairs to the gardens despite the nearly 100-degree heat to enjoy a collection of songs about spring.

The series will continue Tuesday with performances from 10:30 am to 8 pm as part of “Make Music Madison Day, part of an annual international celebration of music taking place in more than 1000 cities.


While the endowment will support performers in the Summer Concert Series for years to come, Vande Slunt said he would like to see the funding also expand other arts opportunities at the popular Madison destination.

“As this endowment grows, we’ll be able to talk about things like temporary art installations or poetry readings, or maybe work with various community organizations that we haven’t always had the resources to support,” he said. “It’ll be exciting as this builds over the next several years to think about what might be possible.”

Vande Slunt said he has been working with the donors on creating the endowment, dubbed the “Bridging Nature and Art: Performance and Visual Art in the Gardens Endowment,” since the winter of 2020. He said the donors started volunteering at the garden in 2016 .

“They saw the wide variety of folks that the garden serves and how the concert series continues to grow and offer diverse performers,” he said. “That brings in diverse audiences. So they were excited to be a part of that. They wanted to help that grow in a very impactful way and allow us to further serve the community.”

The Madison Chamber Choir performing a series of songs about spring, including “This Sweet and Merry Month of May…” by William Byrd.


The addition of art and music can attract people who might not otherwise visit the gardens, Nodolf said.

“Not everybody is a gardener or thinks that coming to a botanic garden for an afternoon is going to be the way they want to spend their time,” she said. “Programming like concerts helps people see what we’re all about and see that it really is a place for them. Nature is somewhere that they want to be and they feel like they can belong.”

Leticia Malavazi is one of those people. She moved from Brazil two months ago and visited the gardens twice in the past two weeks with her parents, who are professors of agriculture.

Malavazi attended the first concert in the series with a friend.

“It’s beautiful, it’s summertime,” she said. “I heard (the gardens) have amazing free concerts and amazing free areas, and I want to enjoy it before the winter rolls in because I heard you have a pretty rough winter.”


This year’s Summer Concert Series will include 10 performances by bands including the hip-hop group Supa Friends, Celtic music performers The Kissers, and the soul group Don’t Mess with Cupid.

Olbrich Botanical Gardens’ Summer Concert Series runs each Tuesday at 7 pm until August 23. Concerts are free, although a $5 donation is appreciated.

June 21 — Make Music Madison Day. Music from 10:30 am to 8 pm in the gardens, featuring headliner Something to Do at 7 pm

August 2 — Opera at the Gardens

The range of performers should attract a diverse cross-section of the community, Vande Slunt said.

“You see kids, and sometimes grandma and grandpa also come and dance, which is pretty cool,” he said. “It’s a really good Madison summer tradition. It’s not uncommon to see the great lawn filled up with several hundred people … and we cover all genres to hopefully bring in all different types of folks throughout the community.”

Nodolf estimated that the Summer Concert Series typically brings about 500 visitors to the garden for each concert. She added that the concert series has been running for more than 20 years and is a community tradition.

Lucy Jenkins, a Madison native, has attended the Summer Concert Series off and on for almost 30 years, she said.

“It’s a beautiful setting, with the view of the gardens,” she said. (This endowment) is great, any chance to extend the arts to more people I think is fantastic.”‘