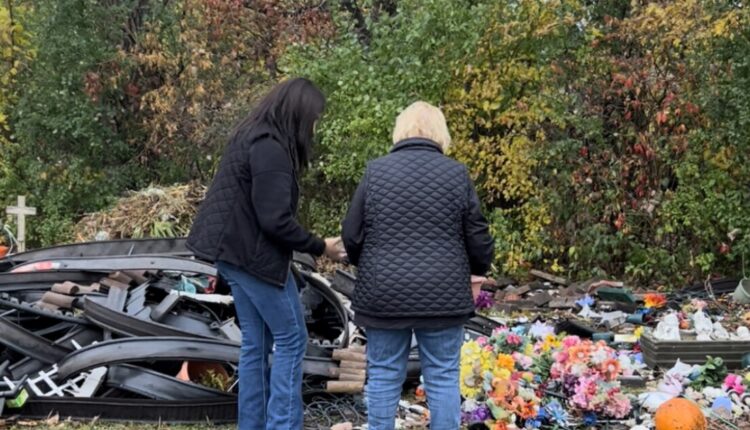 KENOSHA, Wis. — At St. George Cemetery in Kenosha, gravesites now sit bare and mementos and flowers are piled up in and beside dumpsters.

Families who have loved ones buried at the cemetery said they’re outraged and heartbroken. They said it all happened without any warning.

“I come here every day, twice a day minimum. So, somebody could have reached out to me,” said Simone Turner whose fiancé is buried at the cemetery.

Turner has six kids with her deceased fiancé, including a 7-month-old she was pregnant with when he passed away a little more than a year ago. She brings her kids to his gravesite every day after school.

“They love to maintain it. The little ones water the flowers, they help pick out the decorations and all of that,” Turner said. “I have a young son who just started school so he’s a kindergartener and he loves to tell dad about school because it’s something new for him.”

But now the gravesite with memories of their father is nearly empty.

“We can’t have pictures here so we don’t see his face anymore. It’s a disconnect now,” Turner said.

Luckily, she said she was at the cemetery when items were being removed and she was able to collect her family’s stuff and bring it home. But, she knows others weren’t as lucky.

Sandy Parise was looking through the piles of mementos on Friday evening when she came across a cross that used to be by her in-laws’ headstones.

“They were solar crosses that we put there so at nighttime when we drove by we could see mom and dad’s gravesite,” Parise said.

She’s not sure if they’ll be able to find any more of the items that were placed at her family’s gravesite.

The cemetery’s website says items like shepherd’s hooks, lights, pictures, and candles are prohibited. But family who have had loved ones at the cemetery for years said that hadn’t been the case.

Caitlin Busse, whose grandparents, aunt, and sister are buried at the cemetery thinks the site must have been updated recently.

“Part of why my family chose this cemetery is because they were a little lax on the rules and regulations,” Busse said. “We’ve been here for five years, with my grandpa passing first, and there was never a fall clean up like this where they remove everything. Sure, if there’s like dead wreaths or dead flowers or your typical fall clean up, sure. But there’s never been something like this in the past five years we’ve been here.”

Busse said her dad was passing by the cemetery when items were being removed and was, fortunately, able to collect items from the gravesites.

Now, Busse’s family isn’t sure if they’ll be able to put out a flag or her grandpa’s medallion for Veteran’s Day next week.

TMJ4 did reach out to the cemetery but hasn’t gotten a response back.

Journalists Cut Through the Noise, From Open Enrollment to Magic Mushrooms