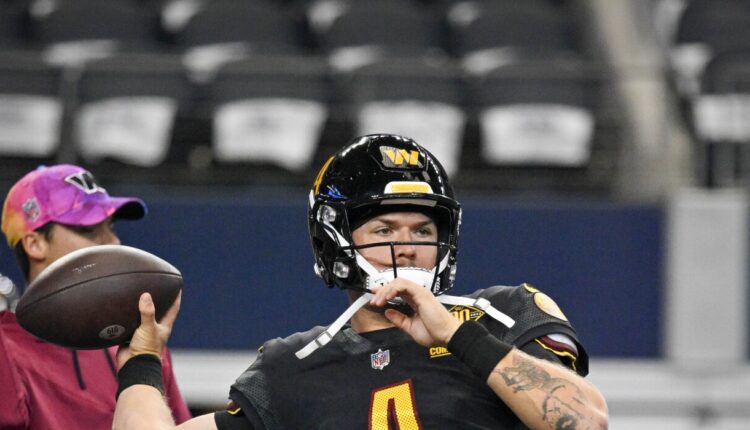 For the third straight year, Washington has lost a starting quarterback to injury. Once again, it’s Taylor Heinicke coming off the bench.

With Carson Wentz out for at least a month with a broken ring finger in his throwing hand, the Commanders (2-4) looks for a spark from the charismatic backup against the visiting Green Bay (3-3) Packers on Sunday in Landover, Maryland.

The game will be played amid unusual circumstances as there is increased scrutiny of Commanders owner Dan Snyder. Tuesday at the NFL fall meetings, Jim Irsay of Indianapolis became the first owner to speak out against Snyder when he told reporters “there is merit for removing him.”

Related to that, some Washington home games have become bizarre spectacles, with fans of the visiting team outnumbering Commanders supporters and chants of “Sell the Team” growing.

With that as a backdrop, Green Bay will play its first of three straight games on the road, though Sunday’s environment will bear little resemblance to what the Packers can expect in upcoming games at Buffalo and Detroit.

Rodgers has struggled to find a reliable receiver after the departure of Davante Adams. Inconsistent play from the offensive line also has plagued the Packers. In Sunday’s 27-10 loss to the Jets, Rodgers was sacked four times and pressured relentlessly.

“If we don’t block better, it’s hard to do anything,” Green Bay coach Matt LaFleur said.

The defense has been shaky as well, as the unimposing offenses of the Patriots, Giants and Jets have scored 24, 27 and 27 points, respectively, against the pack the last three weeks.

Washington is struggling as well. The Commanders have lost four of their last five with the win coming in ugly fashion, 12-7 at Chicago in Week 6.

Commanders coach Ron Rivera has come under increased fire after two seven-win seasons. After the win over the Bears, he lost his cool and stormed off when asked a pointed question about Wentz.

Now he turns to Heinicke, who has had his moments. Two years ago, in his first start for Washington, Heinicke threw a scare into Tampa Bay in the playoffs, throwing for 306 yards in a 31-23 defeat.

Last year, after Ryan Fitzpatrick was lost for the year, the Commanders got off to a slow start before Heinicke guided them to four straight wins to get them into playoff contention.

Heinicke has a 7-9 record as an NFL starter but he’s won over fans and teammates with his fearless mindset.

Last year in a 24-10 loss at Green Bay, Washington outgained the Packers 430-304 but two turnovers, including a Heinicke interception, were costly.