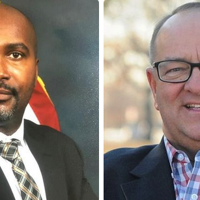 First-time challenger Democrat James Simmons, 50, will face Republican David Zoerner, 53, a multiple times candidate, in the Nov. 8 general election. They are vying for the job held by David Beth, a Republican who has been sheriff the last 20 years. Beth announced before the 2018 election he would not seek another term.

Zoerner first ran for sheriff as a Republican against Beth in 2014, during the August primary but lost to the incumbent, who garnered more than 70 percent of the vote. No Democrats ran in either the primary or general election in 2014.

In the Aug. 9 primary, Zoerner won a decisive victory capturing 8,927 votes or 47.4% of the polling amid a field with the largest number of candidates running in recent memory.

Simmons had now challenger in the August primary. Among those who selected a Democrat, Simmons earned 11,040 votes, or 99% of the polling.

A partisan position, the sheriff is elected every four years and currently earns an annual salary of $114,472, which will remain unchanged in 2023. With a budget of nearly $45 million for next year, the sheriff is responsible for the third largest law enforcement agency in Wisconsin, overseeing more than 360 full-time employees, including 137 sworn officers, and commands the third largest county detention system in the state.

The Kenosha News contacted both candidates who answered questions including why they chose to run, the most important issues facing local law enforcement and what they would bring to the job if elected. Here’s what they had to say:

Why are you running for office?

SIMMONS: I’m a productive member of society and willing to change the negative image of law enforcement with a different mindset on community engagement. Running as sheriff, Kenosha County needs a new positive direction. As a law enforcement leader for Kenosha County, the sheriff must be able to hold law enforcement and the community accountable for their negative actions. As sheriff, common ground must be found amongst political ideology from different political affiliations. Becoming sheriff, one must not fall under the influence of any extreme agenda which compromises the trust of the community. As sheriff having multiple divisions of experience will help with the camaraderie because the subordinates will respect the sheriff. Since the 2020 riots, the sheriff has been tasked with uniting the community and law enforcement vs showing an adversarial perspective.

ZOONER: Kenosha County needs a sheriff who has spent enough time in the department itself, has experience in working directly with a broad range of issues, and has good working relationships with other law enforcement professionals, leaders, and organizations — I am that candidate. I’ve spent 23-years serving Kenosha County in the Sheriff’s Department, 11 of them as a supervisor. I have worked and supervised in every division of the Sheriff’s Department: Patrol, Civil Process and Detentions. My opponent has never worked in law enforcement in Kenosha County. I’m the only one with the experience, training and drive to turn things around for Kenosha County so we don’t end up like another Milwaukee. I have dedicated my entire adult life to serving our community — I grew up here, I live here, I work here and I want to see it thrive.

What issues do you think are the most important for the office at this time?

Kenosha County Sheriff’s Department Capt. Justin Miller, standing, discusses the need for a data analyst to optimize the use of New World software to meet demands for information from the County Board, its committees and advisory boards, other county departments and communities it serves, as Sheriff David Beth listens during the Finance and Administration Committee’s budget hearings Monday, Oct. 24, 2022.

ZOONER: Crime is at an all-time high nationally and Kenosha County is no exception. Something must be done immediately about the skyrocketing instances of property and violent crimes, illicit drug use, abuse, and trafficking. Kenosha County has been allowed to become part of a deadly drug trafficking corridor between Chicago and Milwaukee and I’m ready to take the action that the current leadership has not. I will launch a multi-jurisdictional effort to shut down the flow of fentanyl and other drugs so that criminals will have no escape. Patrol, Detective and Detentions divisions will be staffed appropriately and we will continue to pursue cases with every resource available to bring these criminals to justice and keep them off our streets. The people of Kenosha County will be able to see a marked difference in the crime rate within my first year of office.

What do you think you will bring to the office?

SIMMONS: As the sheriff, bringing an effective law enforcement agency will consist of working with the community, showing transparency and accountability. The agency must be able to keep up with evolving technology in order to solve highly complex (internet stalking, cyber crimes, evidence collections) criminal activities. The agency must be proactive vs reactive. As the sheriff, promoting and hiring the best and brightest minds is necessary to keep the agency headed in the right direction.

ZOONER: Kenosha County is my home and I’m proud to be heavily involved in its protection. I have first-hand experience in a wide variety of law enforcement specialties such as firearms and taser instruction, drone operation and hostage negotiations. I am still active in all of those disciplines. I also serve Kenosha County on the Opioid Task Force, the Chapter 51 Committee on Mental Health and I’ve been a board member of Women and Children’s Horizons for 20 years helping victims of domestic and sexual abuse. I am a Navy veteran. I have garnered the respect and endorsements from the Kenosha County Deputy Sheriff’s Association, Kenosha Professional Police Association, the Republican Party of Kenosha County, Racine County Sheriff Chris Schmaling, as well as, several chiefs of police from our area that I have worked beside. They not only trust my ability to lead the Sheriff’s Department but that trust will allow us all to collaborate and work together to improve public safety throughout the entire region.

IN VIDEOS: Kenosha County sheriff candidates introduce themselves at forum