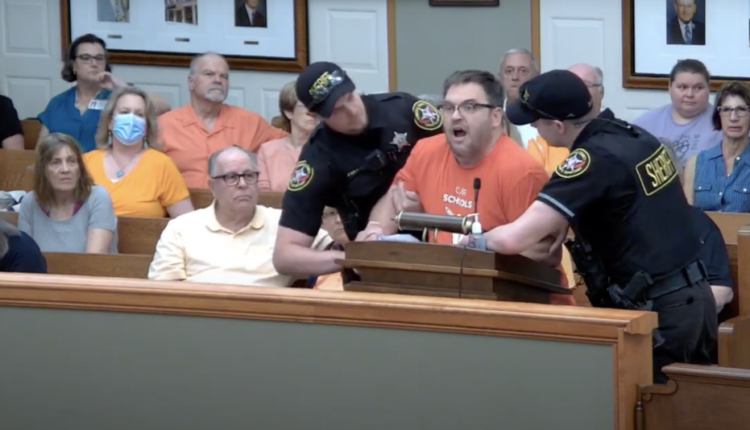 A meeting of the Kenosha County Board ended in chaos on Tuesday night after the board chair ordered sheriff’s deputies to arrest a citizen giving public comment about a provision that would allow people to carry weapons into county buildings.

The man, 43-year-old Joel Trudell was booked into Kenosha County Jail on Tuesday night on charges of disorderly conduct and resisting/obstructing an officer, jail records show. He was released from custody Wednesday morning and online court records do not show any formal records have been filed as of mid-day Wednesday. The Kenosha County District Attorney’s Office said it didn’t yet know if charges will be filed against Trudell

Immediately after Trudell’s arrest, the board adjourned the meeting.

On Tuesday evening, the board — which in this year’s spring elections was taken over by members aligned with the Republican party — was set to take up three controversial measures.

The first would amend a previous resolution prohibiting weapons from being carried in county buildings and allow firearms and electronic weapons to be carried in all county buildings except those housing law enforcement divisions. The second provision would allow the county executive to fire department heads and the third would prohibit the county from accepting grants or donations for election administration.

Trudell was one of about two dozen citizens who were signed up to speak at the meeting, mostly in opposition to the firearm provision.

He opened his comments with a remark about Kenosha’s recent history with firearms, when militia members descended on the city and teenager Kyle Rittenhouse shot three Black Lives Matter protesters, two of them fatally.  “And what was the result of that? Right. We made national news. We killed people. We shot people,” Trudell said. “I don’t understand how bringing more guns is a solution.”

Trudell went on to call out a number of supervisors by name and list the campaign donations they received from the Republican party as well as out-of-state donors.

“The Republican Party of Kenosha County and the first congressional district Republican Party spent at least $4,400 to purchase influence from the four county supervisors I mentioned,” he said.

While he was speaking, a member of the audience shouted something. Trudell stopped giving his prepared statement and requested that his allotted time account for the interruption. A few moments later, someone got up from the front row and walked past Trudell on his way out.

“I guess it’s a good thing we weren’t concealed carry, I could have taken that as a threat, huh?” he said.

Board chair Gabe Nudo, responded by banging his gavel and saying, “That was uncalled for.” To which Trudell responded, “Well it’s the truth.”

“I’m sorry Mr. Nudo, I will share your campaign information in a bit,” Trudell said as the two talked over each other.

“One more word and you’re going to go out,” Nudo said.

Trudell shot back, “Are you afraid of the public’s comments sir? I would like my time back.”

At this point, Nudo said, “Your time is out” and called for two deputies to remove Trudell.

As the deputies approached, Trudell refused to leave the podium. Eventually the two deputies lifted him up and brought him to his knees as they tried to get his arms behind his back. Public radio station WGTD reported that a couple audience members assisted the deputies in arresting him.

“What is going on, I’m trying to talk,” Trudell said as he was brought to the ground.

A few members of the audience started chanting, “Shame! Shame!” as the arrest was taking place.

After Trudell was dragged from the meeting room, the board voted 12-11 to adjourn. Because the meeting was ended before the public comment period was over, the board did not take a vote on any of the measures on the agenda. It’s not clear when the next meeting will be scheduled for a vote on the firearm provision.