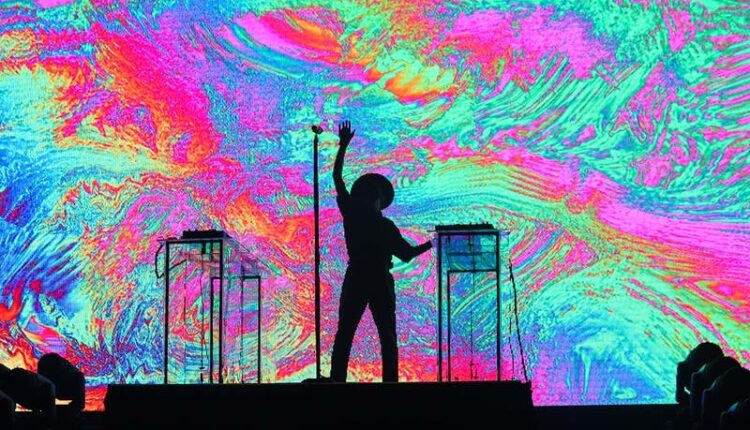 At around 9:30 p.m., the French musician, DJ, record producer, singer and songwriter Madeon stormed onto the stage to the sound of his screaming fans, styled a black, loose shirt with buttons that tucked into his gold-shimmering flowing trousers and a black flat-brimmed hat .

He has set himself up between two tables with mixers, keyboards and synthesizers that he uses for his unique sound. A microphone stand was positioned between its electronic setup. Madeon was alone on stage throughout the show, yet the performance remained interactive and kept the crowd dancing.

It started with the song “All My Friends”, a popular fan favorite, which was rated third by Discotech in their review of the “Best Madeon Songs of All Time”, followed by “Pay No Mind” and “Dream Dream Dream “He sang a large part of it. Madeon continued to alternate between dancing between the two tables and creating different beats to singing more slowly with the microphone. He often used his whole body to keep his audience occupied and to dance with them.

Madeon’s set included upbeat dance music that the audience couldn’t get enough of. The crowd was made up of college students and young adults who were there to have a good time and believe me they did. Madeon occupied himself with his hyped audience as they moshpits, swaying with one another, or just clapping their hands to the beat of electronic music.

What really made the show stand out was the extremely powerful light and visual display. “These visuals are really crazy,” one fan yelled over the body’s trembling speakers.

“Putting together the ‘Good Faith Live’ visual was one of the most rewarding and creative endeavors of my career,” Madeon said in a Twitter post from March this year. “There was so much passion” The visuals matched the beat of the music perfectly. As the sound grew and the beat was fast, the lights would flicker neon red, green, yellow, and blue, and the sound of the speakers shook your body.

When the music slowed down and Madeon took the microphone and sang, the visuals consisted of shades of black and white, often showing a man in a cloak or flower petals that burst in color as soon as the musical beat picked up again.

On the screen behind Madeon, not only were impressive visual imagery shown, but inspiring quotes and lyrics from his songs were projected so that the crowd could sing along. “No More Fear”, “Come Alive”, “Show Me a Miracle” and “Watch Over Us” were just a few of the words Madeon showed his audience.

After “Show Me a Miracle”, Madeon’s intended final song of the evening, he ran off the stage but quickly returned to the sounds of the crowd screaming for an encore – “One more song!” The audience got louder and a little louder when Madeon returned to the stage and the song “Shelter” started playing.

The only downside to the performance was that it only lasted an hour and a half. The show ended around 10:50 p.m. and Madeon ended strong, thanking his fans.

After the show, a fan, Spencer Lipo Zovic, commented on his pursuit of Madeon’s career and his own experience on the show. “I’ve followed Madeon for almost a decade and that performance was absolutely unreal … between the music and the visual, the teasing with every song he didn’t actually play, and the live edits of the songs he played standard- Classics are, this guy knows how to put on a show, ”he said. “I can’t wait to see more of what he’s doing. He’s only 27, 2 weeks younger than me. He has a long career ahead of him. He’s on the way.”

Madeon continues the “Good Faith Live” tour through October 30th and travels to other major cities in the country. Personally, I enjoyed the interactive experience created at the live show and I know Madeon has gained at least one new fan. If you haven’t heard from him before, listen!

Do you enjoy what you read? Receive content from The Daily Cardinal in your inbox

The Daily Cardinal has been reporting on the University and Madison community since 1892. Please consider donating today.