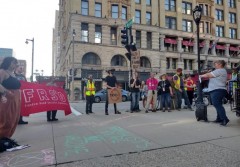 Milwaukee, WI – On July 28, a group of more than 20 people rallied at Dontre Hamilton (Red Arrow) Park in downtown Milwaukee before marching a half mile to the Wisconsin Club, where the Milwaukee chapter of the notorious Federalist Society were hosting its summer cocktail party. The crowd included members of the Democratic Socialists for America, Reproductive Justice Action Milwaukee, Freedom Road Socialist Organization, and the National Lawyers Guild. Speeches were made just outside the big front windows of the building with some of the Federalists looking on.

“I am not three-fifths of a person,” declared Brandy Johnson, a member of DSA, said to open her speech. “But I am all the way pissed off about losing more of my rights!”

A representative of the NLG spoke about the history of the Federalist Society, and then a professor of law from Marquette University informed the crowd about the doctrine of law embraced by Federalists, something called “originalism.” Originalism is an interpretation of the US Constitution that aims to follow how it would have been understood or was intended to be understood at the time it was written.

The Federalist Society is not some shady organization that thinks bad things but has no way to act on them. They have an annual budget of approximately $20 million. Their executive vice president, Leonard Leo, produced the list of 25 candidates for the Supreme Court for the Trump administration in 2018. Six out of the nine Justices on the Supreme Court were or are members of the Federalist Society, and that’s to say nothing about the many members of theirs who serve at the circuit court level across the country.

The Federalist Society is just one of many organizations that wields the ruling class in their ongoing war against the rest of society. Under capitalism, the struggle for human rights is very much a seesaw, with advances being rolled back time after time due to the nature of the state machine. The mechanism for working and oppressed peoples in this country to expand their rights is and will always be organization, but something more is needed if those rights are ever to be ingrained.

“The ruling class will always find a way to turn back the clock on our rights because doing so enters the system from which they benefit and profit from,” said Ryan Hamann of FRSO. “So we need organization, not just for the sake of building mass movements for defense against these attacks, but to raise the demand of socialism from the level of theoretical necessity to the level of practical reality.”