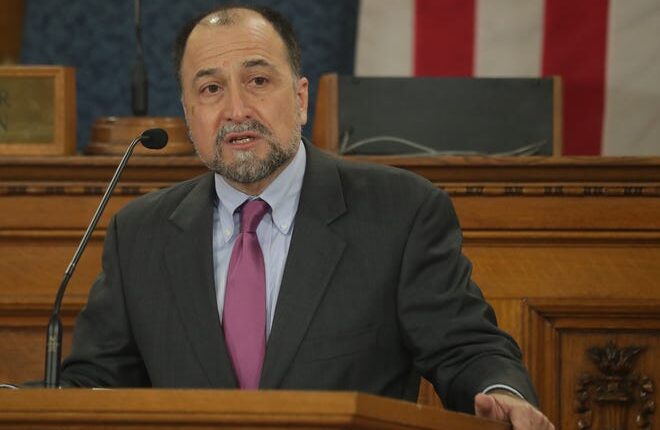 The chair of Milwaukee’s police oversight board said Thursday he will explore whether to require the release of body camera footage of officer-involved deaths in a specific timeframe.

Arguing the Fire and Police Commission should be “self-generating these policies,” Chairman Ed Fallone said he and Leon Todd, the executive director of the commission, have been meeting with various stakeholders since March after members of the public have pushed for greater transparency .

He said he and Todd “feel the commission is going to have to make a decision” to either codify the Milwaukee Police Department’s current, informal practice of releasing footage about 45 days after the incident, or adopt a different procedure that would perhaps require disclosure sooner .

He did not provide any timeline for when he and Todd might come to the commission with one or more proposals to consider, emphasizing the need for a thoughtful approach and commission’s staff limitations to perform the research.

Fallone said he and Todd planned to continue meeting with leadership at the Milwaukee Police Department, the Milwaukee County District Attorney’s Office and various community groups about the issue and invited other commissioners to get involved.

Commissioner Bree Spencer indicated she would like to join, and encouraged Fallone to come up with a timeline, but he did not commit to that Thursday.

“I appreciate the comments you made about how important it is to do this correctly and thoughtfully, but I do feel a sense of urgency around it because of the community requests we’ve received related to this issue,” Spencer said. “I think we do need to have a timeline for folks so people know what to expect.”

In the aftermath of police shootings or in-custody deaths in Milwaukee and elsewhere, the release of any footage can be a hotly contested struggle between members of the public pushing for transparency and law enforcement wishing to preserve the integrity of the ensuing investigation.

The Milwaukee Police Department does not have a standard operating procedure for voluntarily releasing such information after a death or a severe injury occurs with police involved.

Its internal practice is to release what the department calls “community briefings” – videos that include limited and redacted footage with narration from police officials – within 45 days of the incident, even with the ensuing investigation still active. The department has not always met that goal.

That process has been criticized by some activists for its length of time and for the limited footage included in the video. Unedited footage is subject to Wisconsin open records law, but those requests are almost always denied until after an investigation is completed.

The department has defended its community briefing process before. In July 2021, it released a statement asserting that it is “one of the only, if not the only Wisconsin law enforcement agency” that releases footage of such incidents prior to a prosecutor deciding to file charges or not.