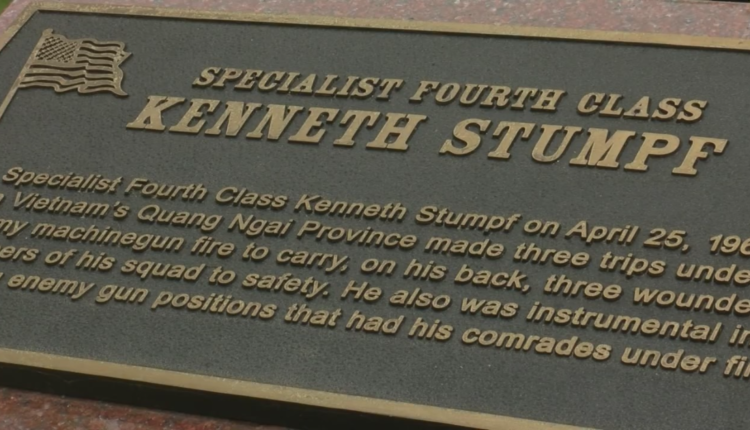 Stumpf passed away last month at the age of 77.

He played minor league baseball and worked at a printing factory before he got drafted. He served three tours of duty in Vietnam and was in the US Army for three decades.

On Saturday, which was also Armed Forces Day, veterans from Neenah and Menasha memorialized Stopf with a ceremony at the Isle of Valor in Menasha.

Several of Stopf’s relatives were included in attendance at his nephew Terry Somach.

“He was funny he was hilarious he would give us money to go down to Waverly’s and buy stuff and then the army took him away from us which is cool because it was his destiny,” said Terry Strumpf.

Terry said he was incredibly proud of his uncle and that he has brought honor to the family name. Another family member, Patrick Strumpf, was also able to make it to the ceremony.

“It was really wonderful to be here it was kind of hard for me to get here being 91 years old, but I’m sure glad that I came,” said Patrick Strumpf.

His family remembers Kenneth Stumpf as a humble man who didn’t think of himself as a hero.

Menasha honors two local Medal of Honor recipients at the Isle of Valor. Elmer Burr earned the award after throwing himself onto a live grenade during World War II to save the life of his company commander.

Armed Forces Day honors all those who have served in the military both past and present.