‘Ribeyes in the sky’: Ted Nugent appears with Republicans to promote hunting bills 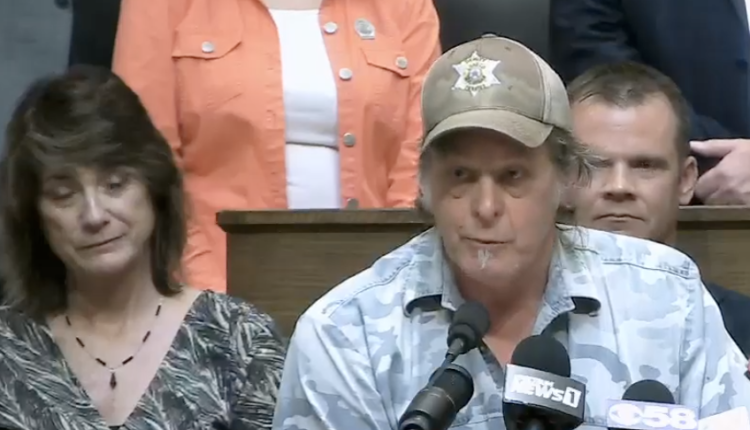 Republican members of the Wisconsin Legislature appeared on Wednesday with the leaders of pro-hunting lobbying group Hunter Nation and its spokesman, musician Ted Nugent, to promote the recent unveiling of their package of 13 bills that aim to expand hunting and fishing in Wisconsin while taking power from the Department of Natural Resources and loosening the state’s gun laws.

At the news conference, in which dozens of people crowded unmasked onto the dais in the Assembly chamber, the speakers lamented the rules and regulations they say are killing off hunting in Wisconsin.

According to various speakers, hunters in Wisconsin and across the country were either an unstoppable political force or humble participants in a hobby being choked to death by Democrats and conservationists. After members of the Legislature took turns explaining what is in some of the bills, Hunter Nation representatives spoke in defense of their efforts to influence environmental policies in the state while occasionally dipping into hard-to-follow ramblings about the spiritual meaning and history of hunting.

“I was born in 1948 when everybody knew the self-evident truth that wildlife is a precious renewable gift that should be managed, with respect, in the asset column, through utility and family hours of recreation, generating value through revenues in participatory activities,” Nugent said in the opening of his remarks. “I’m just a guitar player, but my instinct kicked in early on. And as my dad taught me, the essence of a higher level of awareness as a deer hunter, especially with a bow and arrow, when Roy Case, the great Roy Case in the state of Wisconsin was reintroducing the mystical flight of the arrow, and the demands of archery hunting that tuned us into God’s miraculous stunning creation of renewability. In my home state of Michigan, Fred Bear was doing the same thing. And introducing the incredible challenge, the near impossible challenge of killing a deer with a bow and arrow, and here it is 73 years later in my life, where my dad took his kids hunting, so he didn’t have to hunt for his kids. And now I take my kids and my grandkids hunting, because the stimuli factor, the excitement factor, the challenge of being the very best that you can be, tuning in to your stewardship responsibilities, your conservation, hands-on participation in the natural, renewable season of harvest, so that when you celebrate Thanksgiving, you know where that turkey came from, you know where that venison came from, you know where that trout came from. And I’m here, not representing any Ted Nugent opinions — I’m not that cocky. I’m adequately cocky, but not cocky enough to think that I might have an opinion on God’s renewable creation.”

The Michigan native spent the rest of the news conference giving his opinion on how that creation should be managed in Wisconsin.

“I’m speaking for those millions and millions of American families who pursue this lifestyle of hands-on conservation that literally is God’s work,” he said. “When they’re overregulated, people quit. People don’t participate. We’re going to cleanse the arbitrary, punitive, capricious, overregulation.”

The package of legislation includes bills that would expand where Wisconsinites can carry firearms; force the DNR to remove existing regulations on hunting and fishing and create a season for the hunting of sandhill cranes.

Sen. Mary Felzkowski (R-Irma) said cranes should be hunted in Wisconsin because the bird is no longer on the endangered species list so it should be managed just like any other waterfowl. Nugent, who also said the birds damage farmers’ crops, had a different reason for wanting to hunt the cranes.

“Are you familiar with the term ribeye?” he said. “They’re ribeyes in the sky.”

Representatives of Hunter Nation — who have spent months coordinating with Republicans to prevent the duly elected Democratic governor of Wisconsin from placing his appointee on the state board that controls wildlife management — said they were offended that hunting is a political issue and surprised the package didn’t have any Democratic co-sponsors.

“I’m actually a Democrat, and as I spoke earlier, I don’t understand when someone brings up the concept of policy or party when we’re talking about hands-on, true conservation efforts,” Keith Mark, one of Hunter Nation’s co-founders, said. “So as a Democrat, I’m offended when people try to make this a political issue. This is a common sense issue. Hunting, fishing, trapping is part of a large set of traditional American values. God, family, country, hunting lifestyle. Are we all on the same page on this?”

“Now … if there are no Democrat legislators up here, shame on them. Because this is not a partisan issue,” the Kansas native added.

While Hunter Nation has been especially active in Wisconsin — including suing the DNR to force a wolf hunt in February — the organization’s CEO, Luke Hilgemann, said it plans to bring similar legislation to other states.

“Wisconsin is the beginning, it is not the end,” Hilgemann said. “We are taking this same type of reform package all across the country, because this lifestyle has been under attack, unlike anything that I’ve seen in my life.”

“Anti-hunting groups, well organized, well funded groups are coming here in the minority and trying to tell Wisconsinites — again, millions of us participate in these sports — that what we do is illegal,” he continued.

Earlier in his remarks Hilgemann said one in five Wisconsinites hunt. Statistics provided by Senate Majority Leader Devin LeMahieu’s office show there are 895,000 hunters among the state’s 5.8 million residents.