The play with an odd name x 5 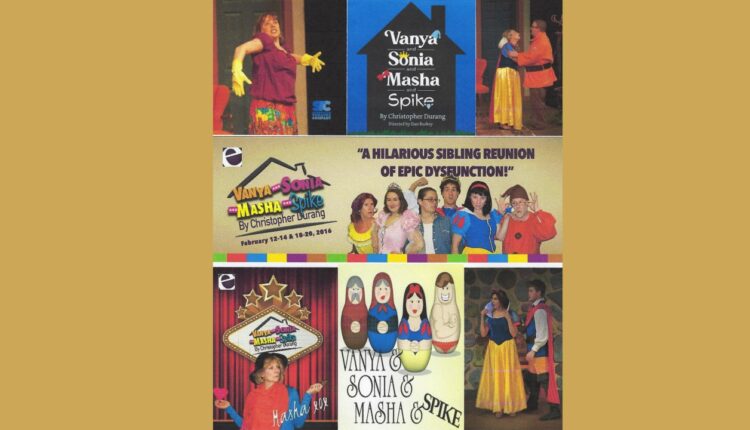 ‘Vanya and Sonia and Masha and Spike’

GREEN BAY, Wis. (WFRV) – Some plays are like banquet lines – so much to offer.

One that is filled with laughs and more has returned to Northeastern Wisconsin for the fifth time.

You may have heard or seen its unusual name.

“Vanya and Sonia and Masha and Spike” offers an enticing spread for theatergoers.

In 2016, Evergreen Productions of greater Green Bay was the first theater group in the region to offer the Tony Award winner.

The players lit up the stage with the dynamic story and characters.

University of Wisconsin-Oshkosh Theater and Film departments created a special version in the middle of the COVID-19 pandemic in November 2020.

A costume party with Snow White is part of the oddball menu that includes spicy language and shenanigans of a stud named Spike.

Attic Chamber Theater of the Fox Valley also launched an energetic version in 2016.

The actors who turned on the electricity included Stephanie Morelock as a wild and zany fortune teller.

She loves the role so much that she has returned six years later – now Stephanie Miller – to help ignite the version that is running to June 25 (my review) at The Forst Inn in Kewaunee County.

It is a treat to see Stephanie Miller take command of the stage as her mystic character foretells happenings. Her performance would be hard to beat anywhere.

Seeing a play more than once by a variety of companies is miles different than seeing the same movie over and over. The movie doesn’t change. The plays separate themselves by place, set and set pieces, costuming, acting styles, performance choices and length.

I have to admit I did not see the Sheboygan Theater Company production this year because I was on vacation.

The play has a lot to offer for local actors. Each character has a juicy segment or two. Being on stage, live, the illusion is the people are real – maybe goofy but real.

The Vanya character lets it all hang out in a flamethrower rant about all that’s wrong with today’s generation.

Sonia is a wallflower who finally gets a chance to bloom… hesitates… and takes it.

Masha has the luster of a screen star – the ego, the wreckage of five marriages and a residue of hormones. A disappointing realization for her is the Snow White she adores and dresses as to “star” at a party is now passé.

Spike is the toughest role to fill, being that he’s flamboyantly sexual and uninhibited about wearing underpants – only – on stage. Alex Sabin sets the local standard in his daring performance for Evergreen Productions.

For no pay, 29 people – Stephanie Morelock/Stephanie Miller twice – have performed in “Vanya and Sonia and Masha and Spike” in the region.

That, too, is different than movies, where a paycheck is expected.