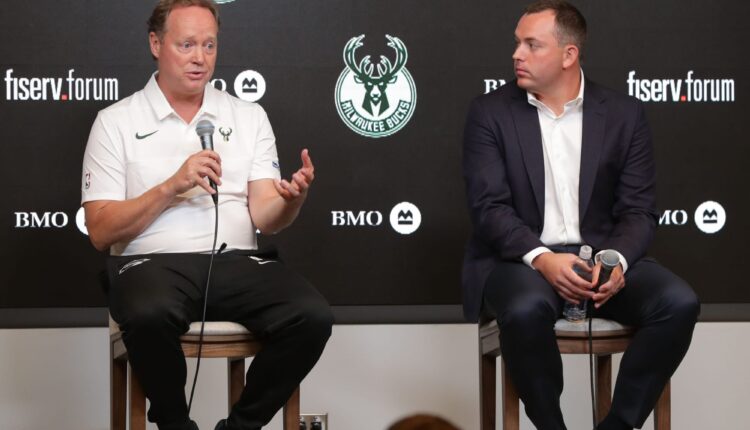 Heading into essential preparations toward the 2022-23 NBA season, Milwaukee Bucks general manager Jon Horst spoke to the media during his annual offseason press conference on Friday.

Horst delivered his thoughts on key events such as the 2022 NBA Draft, free agency, and trade talks while discussing the current status and futures of most of the players on the roster. Following a second-round postseason exit this past year after claiming their first NBA championship since 1971 during the 2020-21 season, the Bucks will be looking to reconstruct the supporting cast behind superstar Giannis Antetokounmpo, Khris Middleton, and Jrue Holiday this summer with the intentions of competing toward another title.

As we consume the information that Horst provided, which can be found on the Milwaukee Bucks’ YouTube channel, let’s dive into five takeaways from his latest presser.

All-Star forward Khris Middleton suffered an MCL tear in his left knee during Game 2 of the Milwaukee Bucks’ first-round playoff matchup against the Chicago Bulls and was sidelined for the remainder of the postseason, but the 30-year-old star appears to be “fine” now, according to Jon Horst.

When asked about Middleton’s status, Horst stated, “He’s fine. There’s no lasting effects of the injury and he’s in a really good spot.” Middleton has been in Milwaukee for the majority of the summer and continues to make progress with conditioning and lifting.

Needless to say, Khris Middleton has been a significant part of the Bucks’ success over the years and his two-way abilities were clearly missed in the seven-game playoff series loss against the Boston Celtics. It’s no secret that if Middleton was healthy throughout this postseason, Milwaukee would have had an excellent opportunity to repeat as NBA champions.

Nevertheless, it’s great to hear that Middleton is looking great on his road to recovery and should be fully healthy by the time training camp starts around late September. The Milwaukee Bucks need Khris Middleton at his best if they’re going to reach the ultimate goal again.

The play with an odd name x 5

560km Into a Solo Paddle » Explorersweb