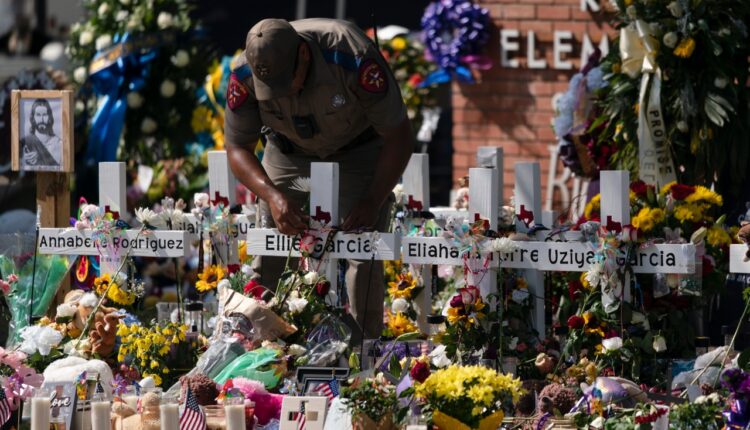 In the hours and days following the fatal shooting of 19 children and their two teachers at Robb Elementary School in Uvalde, Texas, on Tuesday, authorities gave shifting and at times contradictory information of what happened and how they responded.

The investigation of the massacre is ongoing, but much is already known about the nearly two hours that passed between when authorities say Salvador Ramos shot his grandmother and when police radio traffic indicated that the 18-year-old gunman was dead and the siege was over .

Sometime after 11 am — Ramos shoots his grandmother in the face, according to Texas Public Safety Director Steve McCraw. Gilbert Gallegos, 82, who lives across the street from Ramos and his grandmother, heard a shot as he was in his yard. He runs to the front and sees Ramos speed away in a pickup truck and Ramos’ grandmother coming toward him pleading for help. Covered in blood, “She says, ‘Berto, this is what he did. He shot me,’” according to Gallegos, whose wife calls the police to report the shooting.

11:27 am — Video shows a teacher, whom authorities haven’t publicly identified, propping open an exterior door of the school, McCraw said.

11:28 am — The teacher exits to retrieve a phone and then returns through the exit door, which remains propped open, McCraw said. It’s not clear why the teacher was retrieving a phone. Department of Public Safety spokesman Travis Considine said Thursday that investigators hadn’t determined why the door was propped open.

11:28 am — Ramos crashes the pickup into a drainage ditch behind the school, McCraw said. Two men at a nearby funeral home hear the crash and run out to see what happened. They see Ramos jump out of the passenger side carrying an AR-15-style rifle and a bag full of ammunition. The men run and Ramos fires at them but doesn’t hit them. One of the men falls but both make it back to the funeral home. A panicked teacher then emerges from the school and calls 911.

11:31 am — Ramos begins shooting at the school from the school parking lot as police cars begin to arrive at the funeral home, McCraw said. Ramos then makes his way around the school building.

The school district police officer who was working that day wasn’t on campus around this time, contrary to previous reports, McCraw said Friday. The officer drives to the school “immediately” after getting the 911 call and approaches someone at the back of the school who he thought was the gunman. As the officer “sped” toward the man who turned out to be a teacher, McCraw said the officer “drove right by the suspect who was hunkered down behind” a vehicle.

11:32 am — Ramos fires multiple shots at the school and then makes his way toward the open door, McCraw said.

11:33 am — Five minutes after crashing the pickup, Ramos enters the school and begins shooting into two adjoining classrooms, 111 and 112, McCraw said. He fires more than 100 rounds.

11:35 am — Three city police officers enter the school through the same door that Ramos used and are later followed by four other officers, McCraw said, putting a total of seven inside the building. Two officers receive “grazing wounds” from Ramos, McCraw said.

11:37 am — Gunfire continues, with 16 rounds being shot in total, McCraw said. It’s unclear who fired the shots.

11:51 am — A police sergeant and other law enforcement begin to arrive, McCraw said.

12:03 pm — Officers continue to enter the school, with as many as 19 officers in the hallway near the room where Ramos is holed up, McCraw said.

12:06 pm — Anne Marie Espinoza, a spokeswoman for the Uvalde Consolidated Independent School District, posts on the district’s Facebook page: “All campuses are under a Lockdown Status.

“Thank you for your cooperation!”

12:10 pm — The first group of deputy US marshals from Del Rio arrive from nearly 70 miles (113 kilometers) away to assist the various other law enforcement officers already on scene, according to the Marshals Service.

12:21 pm — Ramos fires his gun again and officers believe he’s at one of the door of one of the adjoining classrooms, McCraw said. Police move down the hallway.

Around this time, police are stuck in the hallway because both classroom doors are locked and they must seek keys from a school employee.

Around this time, a girl calls 911 and is told to stay on the line and stay very quiet, McCraw said. The girl says, “He shot the door.”

12:50 pm — Officers open the doors with keys from a school employee, enter the classroom and kill Ramos, McCraw said. Shots can be heard over the 911 call.

12:51 pm — Officers can be heard moving children out of the room, McCraw said.

12:58 pm — Law enforcement radio chatter says Ramos has been killed and the siege is over, said Victor Escalon, regional director for the Texas Department of Public Safety.

For more AP coverage of the Uvalde school shooting: https://apnews.com/hub/uvalde-school-shooting